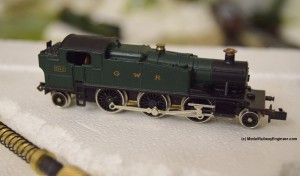 If you’ve seen numbers like 0-4-0, 2-6-2 or similar describing a steam or model railway loco and wondered what they mean, this is for you.

The number sequences, such as 0-4-0, are a notation system describing how many wheels a locomotive has and their role. It’s used on both full size and model trains.

It was created in the early 20th Century by a Dutch born American engineer, Frederick Methvan Whyte, whose name the notation is known after.

The format for Whyte Notation is x-y-z.

In Britain, the notation was expanded after steam engines were replaced with further letters giving the nature of the locomotives power. D or P is appended for diesel or P, with each followed by a letter revealing the type of transmission – E for electric, H hydraulic, M mechanical. So a six-wheel diesel locomotive with electric transmission would be 0-6-0DE.

> A final, personal, note: I spend a huge amount of time testing, photographing, writing and researching techniques for these articles and pay for all the running costs of MRE out of my own pocket. If you found this article useful you can support me by making a donation on my fund-raising page. Thanks and happy modelling, Andy.
Updated:Thursday, November 12, 2020