Struggling with Papier-mâché and plaster on your layout? Spare a thought for these model railway builders from Germany,California and New Jersey who build the biggest model train mountains.

In Walnut Creek, California, the not-so-miniature Diablo Valley Lines railway, is a 1900 square foot layout with a mountains that climb an astonishing 15 feet off the ground. And it’s not even the highest mountain. 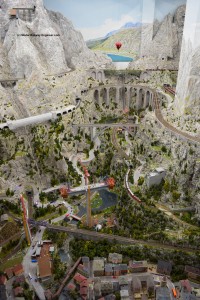 That award goes, yet again, to Miniature Wunderland in Hamburg Germany. Their model of the Swiss Matterhorn towers over Diablo Valley Lines peak by almost 5 feet, measuring a ceiling busting 19.62 feet.

Creating model railway landscapes invariably involves plaster and here contender for the crown of biggest layout, that of  Northlandz by Bruce Zaccagnino in New Jersey, has consumed a staggering 200,000 pounds of plaster.

So next time you’re struggling with your hills and mountains spare a thought for your counterparts in in Germany, Walnut Creek and New Jersey.

> A final, personal, note: I spend a huge amount of time testing, photographing, writing and researching techniques for these articles and pay for all the running costs of MRE out of my own pocket. If you found this article useful you can support me by making a donation on my fund-raising page. Thanks and happy modelling, Andy.
Updated:Tuesday, October 20, 2020