Home » Info » Everything You Could Want To Know About Sleepers – Monday Model Railway Factoid, #6

Everything You Could Want To Know About Sleepers – Monday Model Railway Factoid, #6 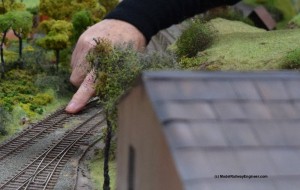 Sleepers are critical to railways and to vital for authentic model railways but what are their origins? How many are there? Here’s all you could want to know about these wooden, concrete and steel beams.

According to various dictionaries, the word sleeper originally comes from the word Sleip in Old Norwegian and is closely related to the word Slab with Dictionary.com defining it’s meaning as a “strong horizontal beam”.

They were originally made of wood with the first use recorded in Newcastle upon Tyne in 1789 and came about as a means to maintain track gauge along the length of the railway despite changes in track geometry.

In 1877 a French gardner Joseph Monier suggested concrete reinforced with steel could be used with the first recorded use of this alternative make being on the London & North Western Railway in 1889. Now sleepers in Britain are concrete while railways around the rest of the world are moving to steel sleepers.

There are approximately 17.5million sleepers on railways in the UK
www.railwaysleepers.com

For those wanting to accurately model their track on real railways, there are between 1320 to 1540 sleepers per mile of track in Britain depending on loading and track formation.

According to Guinness Book of Railway Facts and Feats, sleepers – when made of wood – measure 8feet 6inches x 10 inches by 5 inches.

At the time my copy of the Book of Railway Facts was published, 1993, the then British Rail was replacing approximately 2.5million sleepers a year, although not all of these are swapped to concrete at the time.

> A final, personal, note: I spend a huge amount of time testing, photographing, writing and researching techniques for these articles and pay for all the running costs of MRE out of my own pocket. If you found this article useful you can support me by making a donation on my fund-raising page. Thanks and happy modelling, Andy.