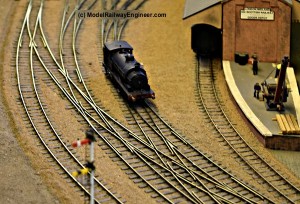 Even wondered what the origins of ballast are and why it’s even called ballast? Read on for the fascinating history of the small grey stones found between track rails.

The origins of the word ballast on railways come from Tyneside. In the definitive guide to railway history, the Guinness Railway Book by John Marshall, it’s revealed that ships returning to Newcastle after transporting coal arrived at the port laden with gravel and other materials to maintain stability and this was known as ‘in ballast’.

Once docked however this material needed to be disposed of and was the dumped nearby. But it didn’t go to waste and this is where it’s use on railways began.

The local tramways, used to transport coal to the ships, needed material to hold the rails in place and for the dumped ‘ballast’ provided the perfect material. Later, it’s use moved from tramway to railways and with it the name.

So there you have it. The term ballast as used on model and full size railways, comes from shipping and moved to tramways and then railways.

In terms of the material itself, today railway ballast is made from crushed granite to defined size; but originally other substances were used with ash, sand and other stones have all been tried.

If you’re building a model railway set before the modern era, check the colours and material used for ballast at the time. An example of such non-grey ballasts on model railways can be seen in the Thirdley (LMS) model railway – pictured above.  And don’t forget to read my comprehensive guide on how to ballast model railway track starting.

> A final, personal, note: I spend a huge amount of time testing, photographing, writing and researching techniques for these articles and pay for all the running costs of MRE out of my own pocket. If you found this article useful you can support me by making a donation on my fund-raising page. Thanks and happy modelling, Andy.
Updated:Sunday, January 2, 2022