What I Wish I’d Known Before Starting A Model Railway 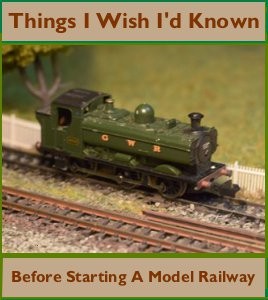 Building a model railway is fun, challenging and rewarding but it’s easy to make mistakes and overlook things when starting. Here’s what I’ve learned after building over 25 OO, N and HO model train layouts.

#1 Look At The Size Of That Thing

Me, when starting my first model railway as an adult: I had big railways as a teenager, I miss those days, I’ll build a small railway that I can have some fun with and keep me out of trouble.

Now: I need a bigger house, just for my railways!

There’s always more things you’ll want to add to your layout, from landscape features to buildings to track configurations.

What I wish I’d done: Allocate more space for my railway — but I’d still want more!

What you should do: Have a plan for more space in the future. Pick a room where you can expand, even if you don’t plan on doing so.

#2 Plan Before You Build

Before I’d tried laying track: I bought lots of different types of track — how difficult can it be? I’ll figure it out as I go.

Now: Hahaha. How stupid can I have been? I wasted a ton of track I didn’t need but also had to buy lots more because the sections I did have didn’t fit the layout I wanted. Big, huge, waste of money and time laying track, pulling it up and trying again.

What I now wish I’d done: Design the layout first, then run trains around in my head to see if it works how I want and then work out the track parts needed for it.

What you should do: Design a track plan before buying the track. Every minute you spend designing a track plan will save you hours, maybe days, later and don’t buy track until you know what track sections — curves, straights, left and right-hand points — you actually need.

What I did: I love trains (in case you haven’t guessed) so when the son of a close friend expressed an interest in having a model train set I bought him an expensive train pack eager to share my enjoyment. It was glorious, and yes, I had to have a quick go — just to check it worked 😀

But, once handed over it got played with a couple of times and then sold!

I wasn’t happy, is an understatement.

Now: If friends show an interest in model railways I buy, loan or recommend a small beginners railway set.

What I wish I’d done: Bought a cheap beginners set to let them explore the hobby first.

What you can do: When buying model trains for children, or yourself if you’re thinking about the hobby, start with a low-cost beginners kit and only spend more once the interest is proven to be more than a passing fad.

What I thought before starting my first model railway: I’d create a wonderful layout in a couple of months and would then have hours of endless fun operating my trains.

Now: I’m on my fourth or fifth railway, have several underways and am continually improving, expanding and designing new layouts.

What I wish I’d done: Never got started in model railways, all the spare time I’d have! LOL

Building a model railway never ends and the real fun, for me at least, is picking an area to model, learning about and researching it and then making the railway, scenery, buildings, and landscapes to match along with problem-solving that goes with scratch model making. I’ve learned so much as a result and there’s so much still to come. It’ll last a lifetime.

What you can do: Start out small; create a small model railway — including the scenery and buildings. Don’t commit to anything until you’ve finished this and then decide which aspects you enjoyed and build the real layout to focus on those. Some of us like scenery modeling, some like track planning and some like operating (someone please explain where the enjoyment is with that? I’ll never understand the fascination!). Whatever find your interest and build on that.

The 80’s me: One of my earliest model railways was in my childhood bedroom where I’d spend every spare hour on my glorious creation.

But model railways are delicate, from the electronics to the trains to the scenery and models, not suited to “high traffic” areas like a bedroom and my layout was regularly damaged. Worse, as I grew up and needed the space, it had to give way to clothes, computers, etc and it was sadly broken up. 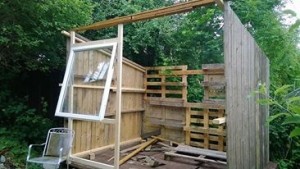 Under construction. The shed my brother built from pallets, while still being built.

Later: My later railways were/are built out of the way — in the loft, shed etc.

Looking back: I wish I’d built my then bedroom OO gauge layout in the loft and could have kept it. I loved that railway!

Think about the long-term usage and suitability of a room. You might also want to consider building a modular railway baseboard that can be split up and moved around.

Extra: See What’s the best room for a model railway

What you should do: Don’t just build a layout in an empty area. If possible, use a room or space (such as a shed) that isn’t regularly used for other activities.

Before: I’ll buy some track, a few locos, wagons and some buildings. Few hundred quid tops.

What I’ve learned: Learn how to make stuff yourself, set yourself a budget and seek out deals and offers. If you want to save some money, and who doesn’t, Hornby without breaking the bank will help.

How you can save money:  Build what you can, save your cash for what you can’t easily make — trains and track. Join my facebook group where other modelers share money saving tips and ideas.

Before: I have a fully loaded toolbox and I’m not afraid to use it.

After several botched baseboards and ruined models: Trying to drill a hole for a track power feed with a big Black and Decker drill designed to hammer through walls wasn’t one of my better ideas. Equally, my electrical soldering iron just melted the rails.

What I wish I’d known: DIY and normal workshop tools aren’t much use when it comes to small-scale modeling.

You’ll want small tools that are different to what you probably already have around the house. See my tools for model railways post for some suggestions for getting started.

What you can do now: Read up on the tools I recommend, get those you don’t have and don’t wreck your railway.

My stupid younger self: I didn’t even think about looking after my trains. After knocks, scrapes and even instances where trains ran off the track and over the edge of the board to the floor below several of my trains had chipped paint, broken wheels or couplings and worse.

The older, wiser, me:  Now my locos and rolling stock are boxed up or put into a safe storage before and after use. See where do you store your trains for ideas.

Teachings of time: I could kick my younger self and I wish I’d taken care of those trains. I still mourn for my Hornby crane that came to an unfortunate end on the floor one evening.

Model trains are fragile and expensive. Needlessly damaging my beautiful trains was bad enough but the cost of getting them fixed quickly taught me the hard way.

How to protect your investment: Look after your rolling stock. Box them up when not in use, respect them when using them.

When building my railway: I was in a hurry to get my early railways finished. In the excitement of building landscapes and positioning buildings, glue, paint and worse were splashed onto the track and the rails often got coated with PVA etc causing problems later. Worse, tools slipped and hit rails or points damaging them.

Having built a few railways: I protect my track work when working near it. It takes slightly longer when doing the work but it’s time well spent if you don’t want to spend ages clearing your track and repairing points.

History wish: I wish I’d taken care of the track on previous layouts. When treated properly it’ll last years and years and can be reused.

What you can do when next working on your layout: Mask track when working on it.

Along with the rolling stock, your track is the most expensive and most difficult to replace (once laid) aspect of your layout. Look after it.

After many years these are just some of the things I’ve learned and wish I’d known before I started on building model railways, but there’s still plenty more to learn. I want to hear from you and what you wish you’d known. Add your suggestions below as a comment and help others learn from your mistakes.


Get yours here.
Follow
MRE uses cookies to give you the best experience on our website. If you continue to use this site we will assume that you are happy with this.AgreeNoRead more
Revoke Cookies