One of my layouts, the Wandle Valley, will feature the old Tri-ang factory in Merton. Sadly, the building is no longer there which makes modelling it difficult but here are few references I’ve been able to find.

One of the most informative articles I’ve found is this one on Merton working heritage. This photo in particular.

I had no idea of the size of factory before this article.

Apparently it was 750,000 sq. ft. in size and had over 4,000 employees working there. Started on December 1923, it was originally to be called Triangtois Works but later became just the Tri-ang Works (additional information from here).

This article from Brighton Toy Museum has a map showing where the factory was and most usefully for me even details the location of the siding that served the factory. 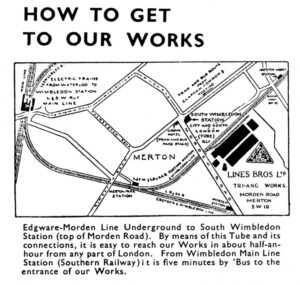 Building on the location the sidings serving the factory is this description at Triang Spacex Toys.

“The works had their own goods railway siding, next to a railway line that ran along the north side of the complex and was replaced by Merantum Way after it was torn up (the railway bedding west of Merton Rd is still indicated on Google Maps, continuing on from Merantum Way).

Comparing the aerial view to the map and satellite images, the Tri-ang works were bordered by what is now Merantum Way to the north, the A24 (Morden Road) to the west, the thin path at the eastern end of Jubilee Way to the east, and a line running ‘below’ Big Yellow Storage to Deer Park Rd in the south.”

Very useful and gives a great indication of precisely where the line would have been.

That’s all I’ve uncovered for now, if you have any further information, especially photos of the factory, I’d love to hear about it.