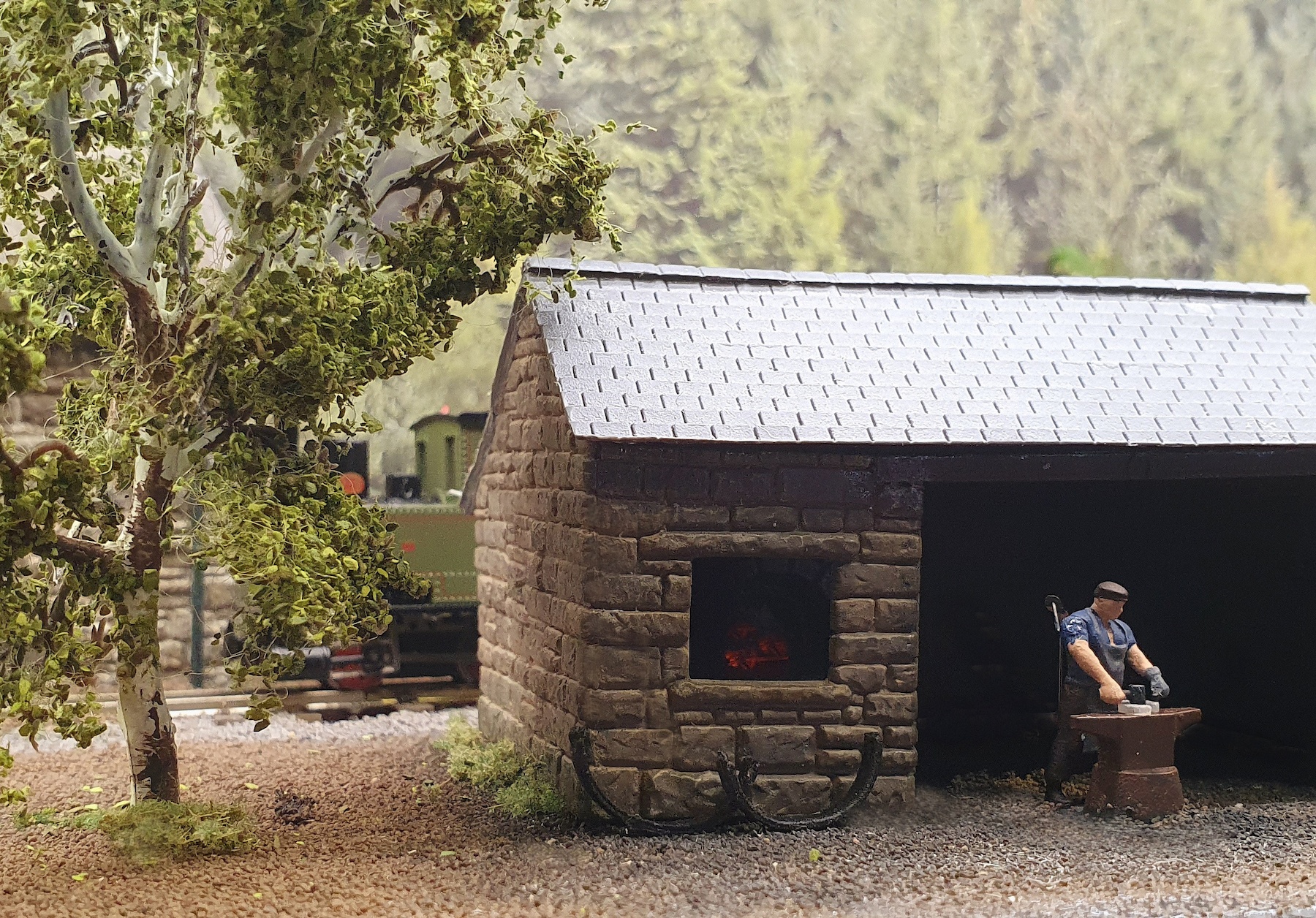 With the goods shed almost complete, I’ve moved onto to the smithy.

This is a centre piece attraction for the layout, sitting at the front and centre of the layout so I want it to not just look good but hold the eye, so it features not one but two animations.

But for the basic construction. 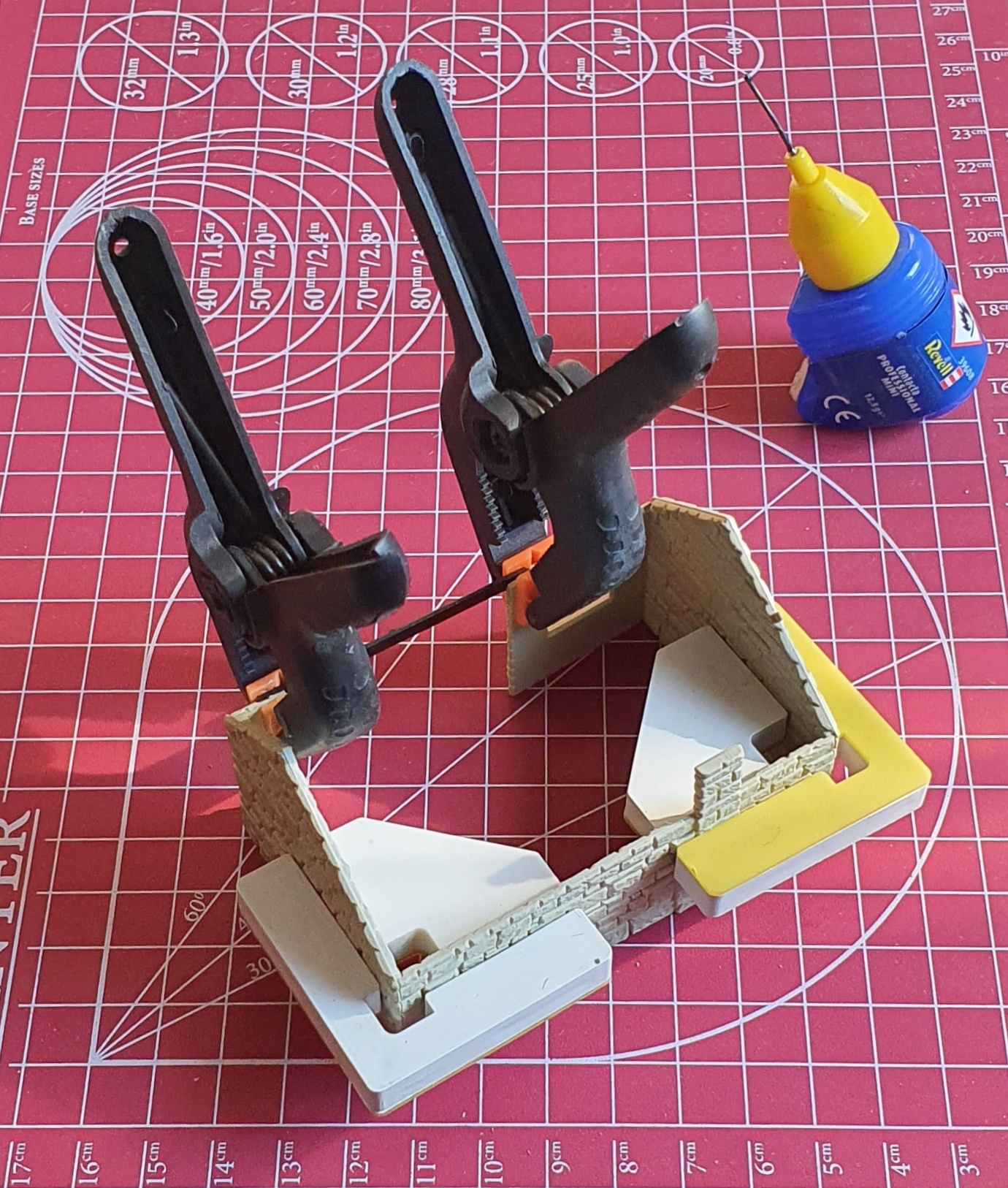 Like many the mill house, I used heavily adapted kit for the basic frame work of the blacksmiths – the Wills Kits Village Forge.

Like the other buildings, I glued Wills Gauge Coarse Stone plasticard (SSMP200) to the internal walls and added 4 mill strips of the same material to create a lip at the corners of the entrance and windows to give the walls depth and added another sheet on the inner walls so internal detailing is visible to anyone looking. The smithy will also have objects on the floor visible through the main entrance I needed a base on which to sit these. For this, a sheet of Wills wooden planking (SSMP201) was cut to size and glued to the base.

If you’ve read the previous articles in this series, you’ll know that for plasticard stone walls I spend a lot of time on the corners; filing and cutting morter lines between the stones and rounding the edges so they look right. (See the article here for how I do this).

This was done with this model too before painting on a wash of Vallejo stone grey and then dry brushing individual stones to create the colouration similar to other buildings on the layout.

With the basic framework constructed, I could then added the first animation: a glowing forge.

For the forge itself, I used the excellent World War Gaming Blacksmith Forge & Street Market Set. This is a war gaming set and isn’t the first time I’ve used war gaming models for my model railways. At 28mm Heroic Scale it’s slightly over scale for OO model railway but forges by their nature were often large chunky affairs so I don’t think it’s noticeable.

It comes in kit form and from the parts I cut the forge base to size so it fitted comfortably in the Wills building. (A word of warning, it’s a resin model so make sure you wear a mask before cutting and filling it).

To add the glowing fire element, a flickering Orange LED (salvages from some old Christmas candle-effect lights that I’ve used previously for building lighting) was pushed through a L shaped hole drilled from underneath and through the entrance at the front. 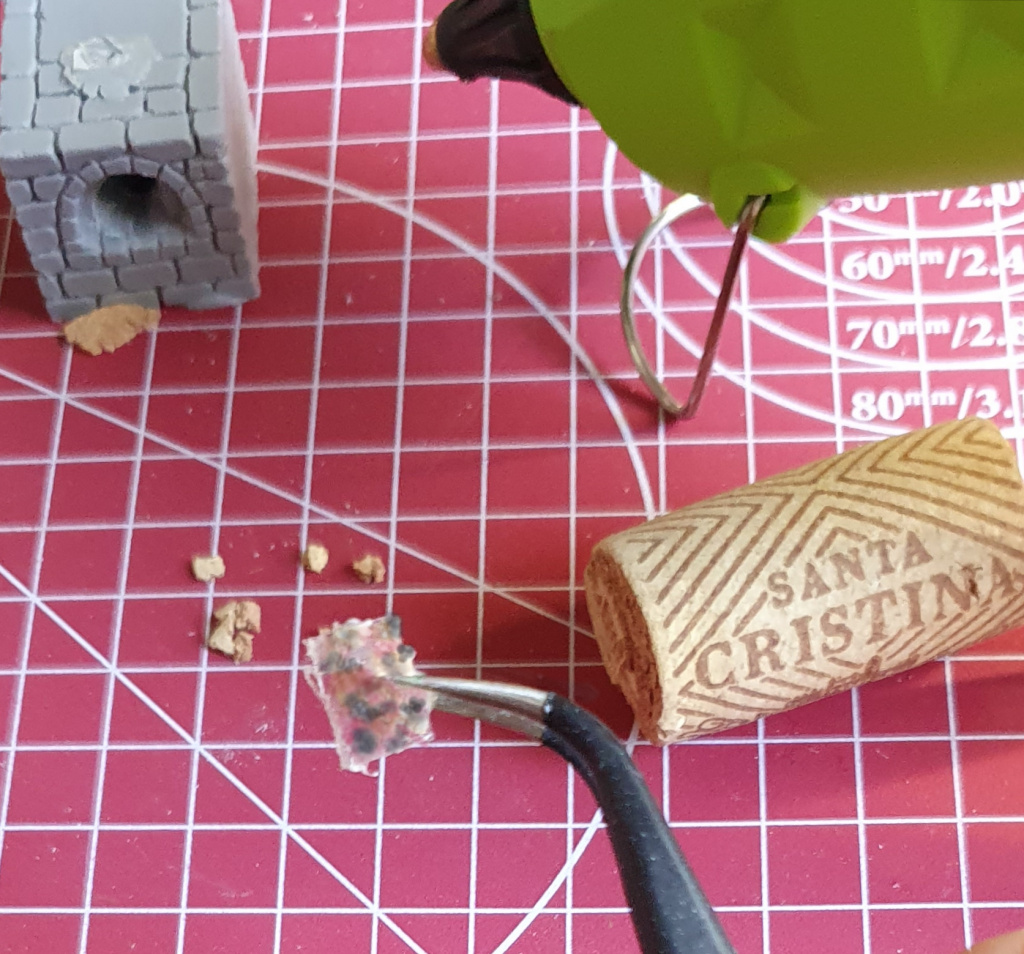 Creating glowing coals: A sheet of clear plastic was cut to shape and bits of cork painted yellow, orange, red and black was then glued to it. When lit with a flickering LED this creates a good proxy for a burning fire.

To add to the burning coals effect, the moulded coals of the model were cut out, done while drilling the hole of the LED, and a sheet of plastic sheeting (from a food container) was cut to size with bits of a ground up wine cork painted in black, brown, yellow and orange and glued onto the plastic film with space left between them to allow the light from the LED to shine though. This was then pushed into the recess at the front.

The LED was then attached to a 3V power supply, stepped down from my accessory supply, before I dark grey with a black dusting to simulate ash that would naturally build up here was applied.

The effect once power was turned was very pleasing and better than I hoped, the the LED twinkling and illuminating the yellows, reds and oranges of the cork created a very pleasing fire like glow.

With the forge completed, it was then glued to the back wall and the chimney from the WWG kit fitted and then Wills roofing adding to close the building. Simple I thought.

The chimney was much larger than the one supplied with the Wills kit so the gap in the roof where the chimney protrudes needed to be wider. Several mistakes later, I’d ruined the supplied roofing sheets and had to replace them but eventually it came together and finished it off as I’ve done with goods shed but minus the pigeon.

A bucket of coal from the WWS set was added next to the forge and hammers, tongues and metal work from the Peco SSAM101 Village Blacksmiths Set were painted matt black with hammer heads finished in GamesWorkshop’s Citadel LeadBelcher grey and slight rusting adding where metal work rests on the ground. These were then dotted around the entrance and leaning on the exterior walls before the finishing touch was added, the animated blacksmith.

From the very start of planning this layout, I wanted it to have lots of animations and animated figures were planned from early on.

For other figures around the layout, this will be fairly easy. I’ll get onto these in a future post but making an OO figure pop out of door, turn while shovelling coal etc, is quite easy. But making a 6mm high figure lift a hammer and bring it down on an anvil had beaten me. I just couldn’t figure out a way to do this.

>This post is part of a series on the construction of a lifelike model railway for exhibitions. To read other posts in the series covering its development, track work, scenery and model building making, see building an exhibition model railway.

Luckily, it was while surfing around the web looking for ideas I stumbled across the Viessman eMotion animated figures and amazingly they had a blacksmith figure – Viessmann 1514 – doing exactly what I wanted. (You can get a sound module for the blacksmith but I’ll be incorporating sound effects into the environmental audio track that plays on the layout).

It consists of a small circuit board, wires to tube containing the motor and which then extends vertically to connect a base on which the figure sits. Mounting it on the layout, is matter of marking where you the figure to sit, drilling a hole for the tube. The figure is then placed on the layout, with the tube sliding into and through the hole and then fixing the circuitboard nearby.

I placed the figure just outside the entrance of the smithy building where he was surrounded by the tools and bits from the Peco SSAM101 set.

Power is from a 14V supply which I took from my accessory feed controlled by a rocker switch so I can turn the animation off when wanted, as with other animations and electrics around the layout. And that’s the animated figure taken care of, a lot easier than I hoped.

A video of an early proof of concept – minus a lot of the subsequent detailing and finishing – showing the forge and blacksmith working is shown below:

All told, I’m pleased with the result.

The forge fire glows and the blacksmith stands there hammering away on his anvil, complete with glowing iron. It’s a nice centre piece display and sets the tone for the rest of the layout.

Before I get onto more buildings, I’ll be blending the backscene and foreground, so come back soon.

-> This is one in a series of articles on creating an 009 exhibition model railway. Click on the link to read the other articles.


Affiliate notice: Some links on this page will take you to carefully selected businesses, including Hornby, B&Q, Rapid Online, Amazon, eBay, Scale Model Scenery and Element Games, through which you can buy products mentioned. These links are made under their affiliate schemes which means that although the price to you doesn't change I get a small commission on the orders you place. Please see the disclaimer for more details.
Updated:Thursday, December 9, 2021