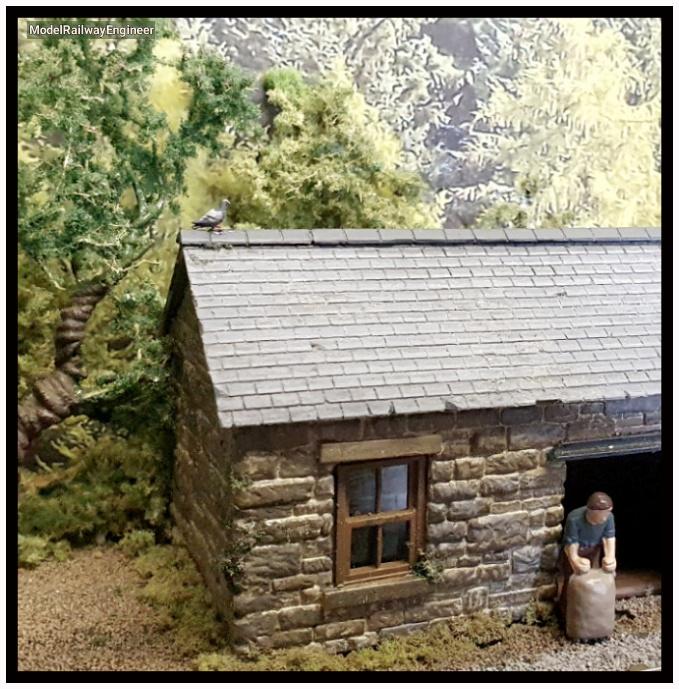 I’ve recently finished another building for my exhibition layout. Well, it’ll do for now.

The original building came from eBay but I’ve tweaked and repainted it, including giving it a new roof; changing the colour of the stone and woodwork to reflect the colouring of other buildings on the layout to give a cohesive feel and highlighting the runners and fixtures on the hanging doors. The stone work around the corners was also modified to give a more natural finish as I explain here.

A wood-effect floor was also added onto which grain bags I made previously were positioned.

The finishing touches was the roof.

To me, roofs are a critical part of layout buildings. They are, after all, the part of the buildings that will be most seen by people looking at a layout and so I spent some time getting it how I wanted.

In this case, I wanted the weatherbeaten look of a poorly maintained goods shed, befitting the tired look of entire layout – it’s a siding off of a mainline somewhere in the hills of Devon or Cornwall.

> This post is part of a series on the construction of a lifelike model railway for exhibitions. To read other posts in the series covering its development, track work, scenery and model building making, see building an exhibition model railway.

Obviously the shiny perfect look of plasti-card slate wouldn’t do for this decaying look. Instead, I sanded it down to give a rough texture to the slates and then picked away at individual slates around the edges to replicate lost and missing one. The sofits and bargeboards were also left off as this was often absent on sheds in out of the way backwater yards.

A black wash was applied all over before it a coating of Vellejo grey was applied followed by dry-brushed black to pick out the texture created by the earlier sanding.

With the model completed, it was then positioned into place using magnets so it can be lifted off if needed in the future.

As a last and final touch, a pigeon was perched on one end. 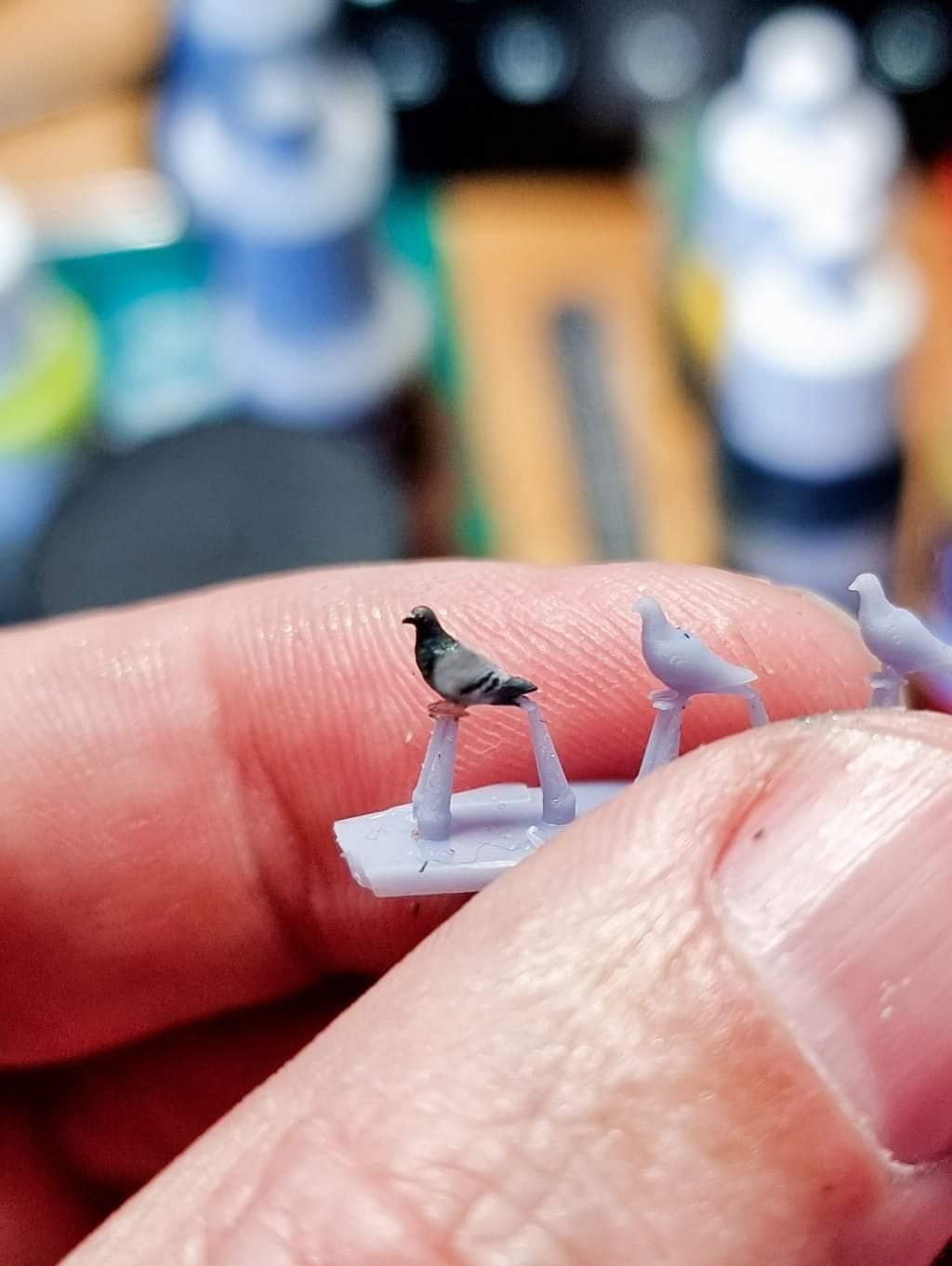 A pain to paint but it makes the building.

This not only adds to the detail and realism of the model, it also supports the feel created by the bird song background sounds that views will hear when watching the layout.

I’d love to say I made the pigeon but try as I might I could find a material I could shape and carve in an object this size and my 3D printing design skills aren’t up to something as detailed as this: the pigeon is just 4mm in size.

Instead, I bought a bunch of pigeons from Fine Scale Model Figures. Given the tiny size of these, the detailing on them is stunning!

The only challenge was to paint it. Luckily, we have a number of pigeons visiting our garden at the moment and was able to get lots of close up reference photos to work from. Using these with a combination of Vallejo blacks and greys and orange for the eye and feet I’ve got a result I’m reasonably happy with.

With the model complete, pigeon included, and sited in place, vegetation was placed around the seam between it and the base to give a lived in feel (my pet hate, is seeing a really nicely made building just plonked on a layout with no attempt made to blend it into the surrounding area. Why spoil all that hard work?).

Anyway, with the vegetation added it’s good to go. In time I might add a few extra bits and pieces of extra detailing — barrels etc — around the side but it’s largely done and in its home at the right hand side of the layout creates a balance with the water wheel mill at the other end.


>A final, personal, note: I spend a huge amount of time testing, photographing, writing and researching techniques for these articles and pay for all the running costs of MRE out of my own pocket. If you found this article useful you can support me by making a donation on my fund-raising page. Thanks and happy modelling, Andy.
Updated:Thursday, December 9, 2021