For a change I decided not to break anything on my exhibition layout.

After the recent near disaster with the track on my exhibition layout, I decided to focus on the electrics where, fingers crossed, I couldn’t break anything.

And thankfully after a bit of planning, soldering and glue-gun action I’ve finished the electrics on underside of the baseboard. Without any screw ups!

(There also a DC feed for overhead lighting but this doesn’t run under the baseboard so I’ll come to that another time).

Each circuit is attached to its mains transformer/controller with barrel male/female DC jacks.

Using these means my delicate wiring will be protected in the event someone tripping over the power leads at a show. The two halves of the jack will pull apart leaving the rest of the wiring intact if someone trips. And yes I have tested this 😄

The whole thing is laid out according to this plan, although it’s a lot messier in reality.

Starting on the top right, each circuit is attached to its mains transformer/controller with barrel male/female DC jacks. and switches to turn each circuit on or off independently.

I could have just wired the leads from the transformers direct to the layout but I’ve seen a few accidents at shows where someone trips over the lead to the floor socket and yanks wiring off the layout. Using jacks avoids this. Should someone trip over the lead, the two halves of the jack just come apart saving the layout. And yes I have tested this 😄

The male connector on the lead from the power adapters for the accessory and point motor also fit into the jacks without modification. (The particular AC/DC adapters* I use are also adjustable so the output voltage can be changed if needed. I run the accessory bus at 14V and the point motors at 9V but they could be set to anything between 3V and 24V).

These adapters also have screw holes so they can be secured to the back ff the layout rather than just floating around on the floor.

After the jacks, come power switches, allowing each circuit to be turned on or off independently from the others. The switches I’m using for this are simple SPST rocker switches.

From this point, the three circuits are kept physically separate and colour coded to make them easy to trace.

The colour scheme was the result of the wire colours I had available. Red and black for the DCC bus, brown/yellow for the point motor power, green for the frogs and blue and white for the accessory bus.

The Red/Black DCC feed is fairly standard, with 16 gauge (AWG) wire for the bus from the Prodigy Advance. This connects with 20gauge droppers at every track section and links to the point motors for the frog.

If I was running a longer layout or more trains, a larger wire gauge would be needed but for the track length and number of engines running on this layout, 16 gauge is sufficient.

The point motor and accessories could have shared the same wiring loom but l’ll be adding a lot of powered animations around the layout later in the build and don’t want to risk screwing up the point motor wiring or the motors themselves while fitting and wiring these so opted separate feeds. 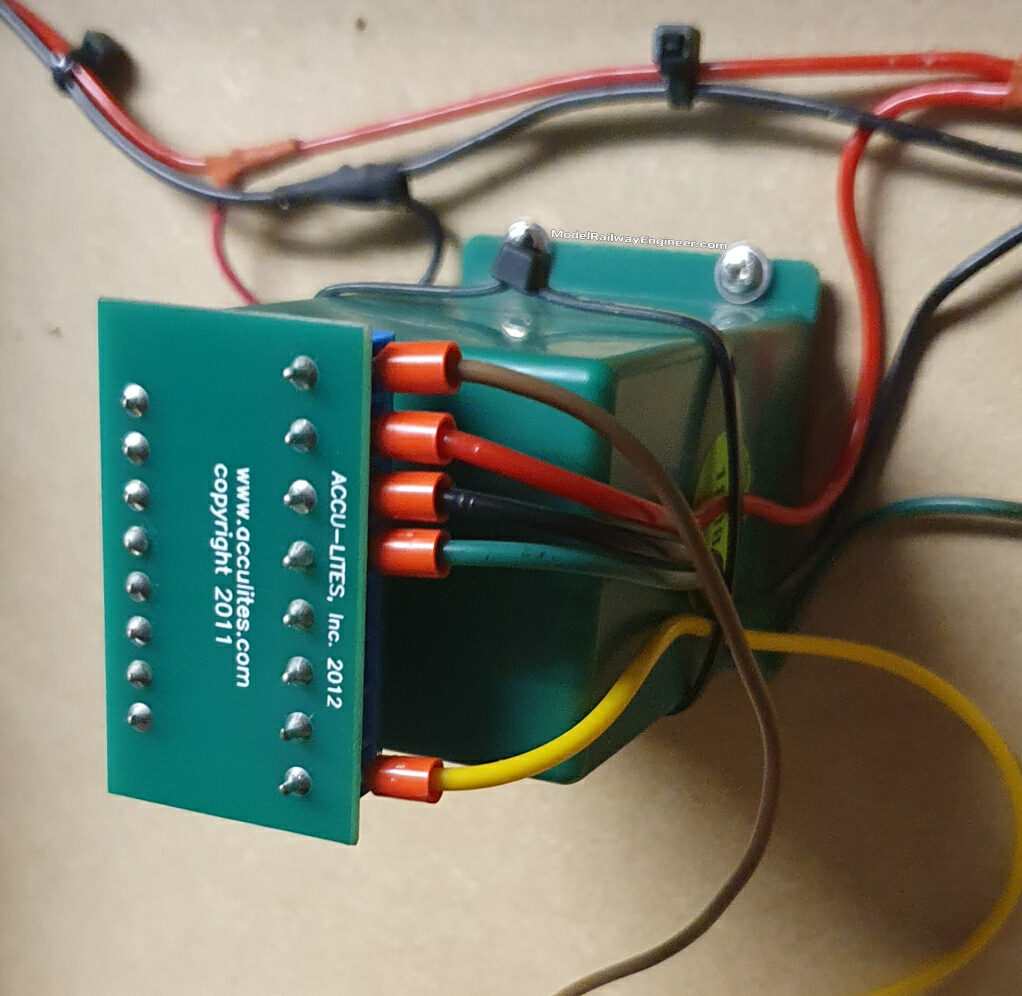 Each circuit runs the length of the board so power can be supplied with a short link from the main feed wires to wherever I want on the layout.

The droppers and feeders are perhaps the most important links of the entire layout – especially to the track and point motors – so these are are soldered for reliability, and using T junctions.

Where the feeder wires connect to terminals, such as those on the Acculites – used for the Tortoise motors – I’ve used ferrules to improve connectivity.

These make life much easier when first connecting everything up and also protect the wiring while giving better and longer lasting connections.

Where the voltage needs reducing – from the accessory supply to a low speed motor used on an animation or a lighting circuit for example – I use these adjustable adapters. Connect the accessory line, turn the little screw and measure the output with a multimeter until I get the desired voltage and then connect this to the animation motor etc. They work well and I’ve been very pleased with how easy they are to fit.

For exhibitions, I plan on standing behind the layout, so the control switches are set on the rear, parallel to their corresponding function on the layout, as seen in the above diagram.

I’ve some used DPDT toggle switches I had lying around for point motor control.

Fitting these i just a case of drilling a hole through the rear panel of the layout board, pushing the switch through and tightening a nut on the shank pulling it right and securing it in place.

Wiring between the switches and Tortoise motor seeing pins 1 and 8 on the switch machine go to the prongs of the switch which in turn is wired to the DC point circuit, as below.

The power feeds for the frog on pins 2 and 3 come from the DCC Bus with pin 5 going to the frog itself.

The majority of the animations are lights or DC motors requiring between 2V to 14V so a step down circuit, as mentioned above, adjusted to the right output voltage is used between the animation and accessory feed. There are currently six of these adjustable control boards around the layout ready for the animation motors etc to be attached.

Each animation will also have its own switch (a SPST micro switch) that, like the point motor switches, sit on the rear panel, parallel to the function they operates. These are small push push button latching switches so as not to be confused with the toggle switches used for the points.

Installing these is similar to the DPDT switches. Drill a hold in the back panel, push them through and screw on a nut to hold them in place. Wiring is as per the diagram below.

All done and in place and without any disasters! Now to crack on with buildings and animations.

This post is part of a series on the construction of a lifelike model railway for exhibitions. To read other posts in the series covering its development, track work, scenery and model building making, see building an exhibition model railway.
Affiliate notice: Some links on this page will take you to carefully selected businesses, including Hornby, B&Q, Rapid Online, Amazon, eBay, Scale Model Scenery and Element Games, through which you can buy products mentioned. These links are made under their affiliate schemes which means that although the price to you doesn't change I get a small commission on the orders you place. Please see the disclaimer for more details.
Updated:Thursday, December 9, 2021