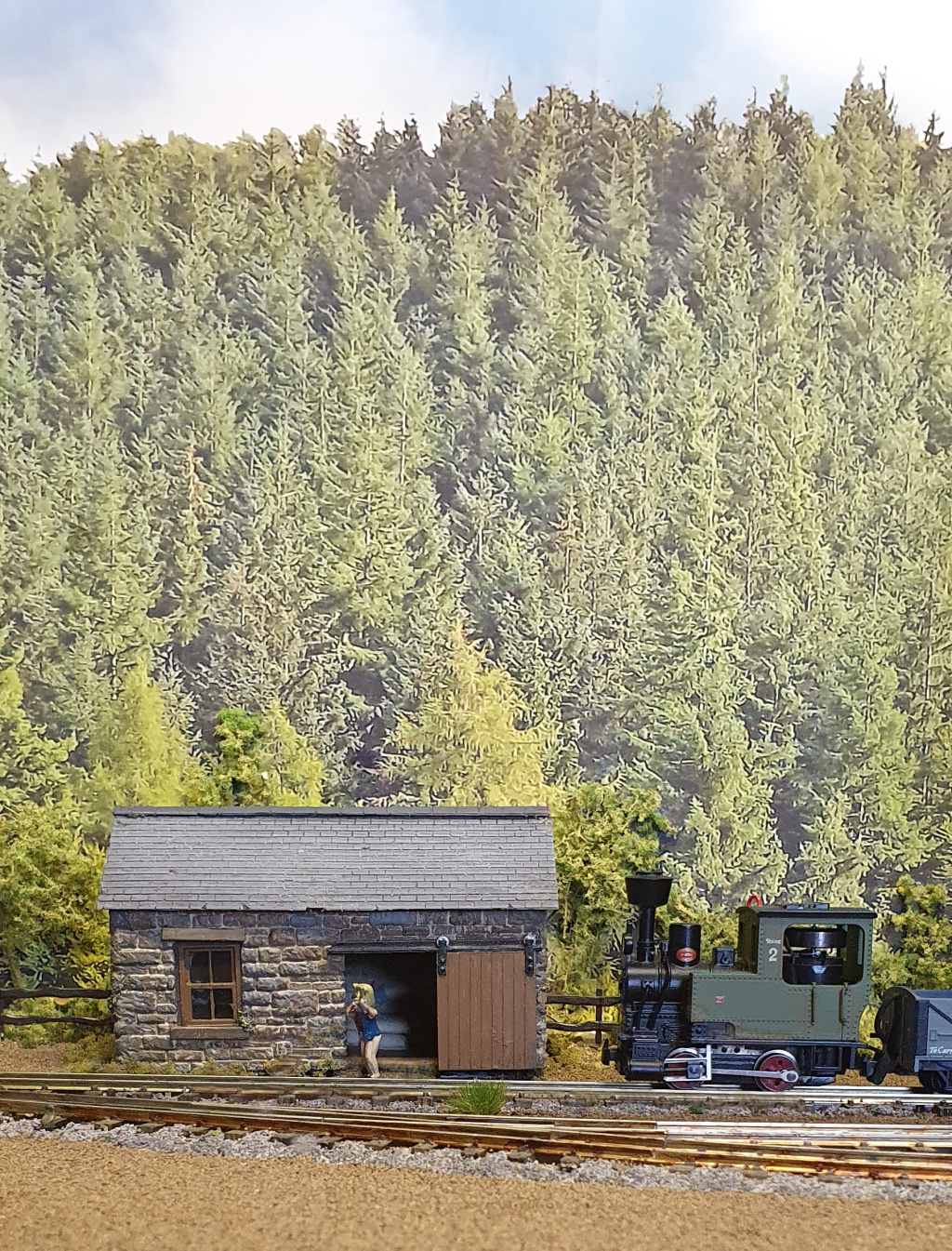 Want ambient background sounds on your layout, it’s cheaper and easier than might you think.

Many railway modellers have equipped their locomotives with sound effects, from the  distinctive chuff, chuff, chuff of steam locos and their pistons to the reviving up of a Deltic.

These are achieved via DCC sound decoders such as the the Loksound 5 or Zimo’s MX645 while the Train Tech SFX10 and SFX20 offer similar functionality for DC trains.

From bird song on rural scenes to station announcements to the hubbub of car horns and sirens in urban scenes they really add to the overall atmosphere of a layout. (If you get a chance, watch and listen to Canute Road Quay by Graham Muz).

I want these for my exhibition layout. Both because they add to the atmosphere and because nature sounds and their therapeutic effect boost the relaxation I get from the layout. The benefits of nature sounds are explained here.

Specifically, I want  a countryside soundscape. with he babbling water sound for the river and bird song matching the woodland back scene.

In days of old, this was achieved via tapes or CDs and there are still a few businesses offering environmental sound tracks for model railways on CD. Greenfrog in the US in particular springs to mind.

But there are more capable modern offerings, with small many varieties of small circuit board cable to computer sound files, such as the ubiquitous MP3 music file.

My first thought was to use one of the cheap greeting cards that play a ditty when opened. If you spend a little time on eBay etc, it’s possible to find versions that can be loaded with your own music.

I’ve used these before and once the mechanism to activate the sound on card opening is replaced and a louder speaker are fitted they’re quite effective. The downside is the limited onboard onboard memory can’t store long sound clips, typically 30 seconds, they’re designed for a quick birthday song after all.

For my layout, longer play times were needed.

I considered using a Arduino programmable microcomputer but this involved programming the sketch files and while I don’t have a problem with this it seemed overkill.

These are very capable modules, and include the ability to play individual sounds from range of preloaded effects or play in a defined sequence . If you want specific sounds at specific times and easy set up, I’d recommend these. For my layout however I just want a long playing track of background bird song and TBH prefer hacking my own solutions. 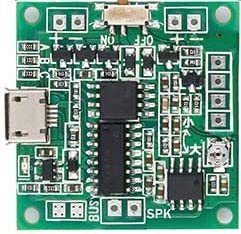 After a bit of searching, I’ve been using this unit.

At approx. £11 (at the time of writing) it’s cheap and just needed a bit of soldering before loading a sound file for use on the layout. (see my guide to soldering if your new to this)

And the onboard 8Mb of memory will hold about 8minutes, assuming  128kb/s, compared to the 30second capacity of recordable greeting card chips.

Here’s what I did.

The chosen circuit board plays standard MP3 sound files and there are many environmental sound files in this format feely available for downloading on the Internet.

The following websites in particular have large libraries of sound effects that can be downloaded and used for free (for non-commercial use, some sites require registration).

The BBC is a great source for environmental sound effects.

Alternatively, you can record your own using a smartphone.

Go to the Apple or Android App store and look for MP3 sound recorders (easy Record and Trim on the Apple store looks good and I use Super Sound on Android which has all the key features needed for both recording and editing).

Once installed, record the sounds you want and then trim them to remove unnecessary delays at the start and end. Save it out and copy it to your computer as you would photos.

In my case, I wanted countryside rural sounds so found a track of distant woodland birdsong with a flowing river.

As mentioned above, I use a bit rate of 128kbps. This gives a lower quality playback than that from a CD, more like FM radio, and for other applications this wouldn’t be sufficient but as it’s for background sound and the noise of the trains coming and going will be louder it’s acceptable for this use.

A micro usb interface is included on the circuit board and its merely a case of plugging this into the computer USB port (mine came with a suitable cable) where it appears as a hard disk and copying the MP3 sound files to the disk and then disconnect it.

On my layout, the circuit board for this sound module sits underneath with all the other electronics – holes in the corners of the circuit board allow it be screwed in place – but there’s no reason it couldn’t sit top side hidden in a building.

Out of the packaging, power comes with a battery pack but changed this a permanent supply, using a feed from to 14v accessory supply on the layout that’s then stepped down to 9v. (You can use this little circuit board to do this if you’re not sure about doing it yourself).

The wires to the speaker wires were a bit short so I’ve extended them. This isn’t necessary but I wanted to place the speaker topside inside a building, as explained later on, so needed a longer wire. This is just a matter of cutting the speaker off its wires, splicing additional wire in and reconnecting the speaker to the end of the new longer lead.

The switch that comes with it is a push button type. I could have used this but wanted consistency with the other control buttons for the animations on my layout so replaced it with one of these.

Like the speaker, this is simply a matter of cutting the two wires to the supplied button unit and soldering them to my chosen switch.

It’s also possible to use play the sounds when a train passes, using a reed switch which would then be embedded in the track. A small magnet on the underside of a passenger coach or wagon activates this when this it passes over and the is sound played. The most obvious use for this would be an announcement being made on a station or a level crossing warning bell going off as a train approaches.

As said earlier, the speaker could sit under the layout but in my case I’ve hidden it top side in one of the buildings (hot glue was used to secure it in place to the model).

This hides the speaker and places the sound where I want it while avoiding any echo that may occur if projected in the space of the underside of the baseboard.

The location is important as the sound needs to be relevant for the setting, it wouldn’t make sense to have the sounds of cars horns coming from a lake or river. In my case, the building – seen above – is a goods shed in front of the woodland back scene so the bird chirping is appropriate while the river is at the other end of the layout so I’ve chosen a track where the babbling sound of water is very much in the background, reflecting the distance to the river.

Annoyingly I had a small house where I wanted the building with the speaker to go but as it was held down with magnets it was easy enough to lift off and move to a new home.

For approx. £10, a bit of surfing on the web and soldering, my layout has bird song, the babble of a river and woodland sounds that ‘echo’ the woodland setting of my railway. It’s an immersive feel and completely changes the experience I get when working on and operating the layout.

If this sounds interesting, pardon the pun, start now by getting the Gaugemaster/Train Tech product with its preload sounds or the soundboard used here. It really adds to the layout and makes using it far more relaxing.

Footnote: When used with some power supplies, an audible hum can be heard from the speaker. If this occurs on your layout, you’ll need a smooth DC supply adapter. I’ll cover this in more detail but for now, Google smooth DC supply and find an adapter with the appropriate output rating.


Affiliate notice: Some links on this page will take you to carefully selected businesses, including Hornby, B&Q, Rapid Online, Amazon, eBay, Scale Model Scenery and Element Games, through which you can buy products mentioned. These links are made under their affiliate schemes which means that although the price to you doesn't change I get a small commission on the orders you place. Please see the disclaimer for more details.
>A final, personal, note: I spend a huge amount of time testing, photographing, writing and researching techniques for these articles and pay for all the running costs of MRE out of my own pocket. If you found this article useful you can support me by making a donation on my fund-raising page. Thanks and happy modelling, Andy.
Updated:Tuesday, June 1, 2021