Making baseboards and tables for your model railway seems straight forward but the construction can often go wrong. Very wrong. The good news is that it’s usually down having the right tools and the right measuring tools in particular.

When I first started making model railway baseboards it looked pretty easy. It was only after finishing and found it wasn’t level and the trains wouldn’t run correctly up my accidental incline that I realised it’s not quite as easy as expected.

My second attempt didn’t fair much better. I drilled holes into the baseboard surface to aid screwing in the cross beams only to realise later that l’d drilled the holes way to large and now had a series of ballast swallowing holes across my abecedarian layout.

Trust me when I say a standard tape measure just won’t cut it. The humble tape measure wasn’t designed for the small accurate measurements that model railway tables and baseboards require.

Here then are measuring tools I wish I’d had when starting and which will make building your model railway table or baseboard make easy and trouble free.

Straight To The Point

Cutting edges that are straight is one of key basics you have to get right when making a wooden baseboard. It’s also a task given the least attention to.

All too often I see colleagues pull out a cheap tape measure, pencil mark a few points the desired distance from one end of the wood and draw freehand through them or using a supposed flat edge to create a line and then and cut along it. Wrong. Wrong. Wrong.

Tape measures are often inaccurate or their bending nature results in incorrect distances being marked.

Get yourself a combination square like this one. The die cast metal rule and stock will ensure it doesn’t flex and will lay straight and using the stock to hold against the wood edge will give an accurate distance measurement. Mark several points at the desired distances and then using the rule again to score a line into the wood along which you can cut.

It was misjudging depth that resulted in unsightly holes in my surface board that set me on my quest to get the right tools originally.

A way of accurately measuring depth and thickness is vital. In my case, if I’d accurately measured the depth of the cross bars and baseboard and set drill depth accordingly I’d have avoided the unsightly holes.

Traditionally, combination square and depth gauge would be used but modern tool boxes have a lot better.  Digital calipers offer precise measurement of depth and thickness. They’re perfect for setting drill length drilling holes to the precise depth required and allowing the selection of the right length of screw and nail. As with all tools, avoid the cheap models as their accuracy is questionable. The
Mitutoyo is widely regarded as one of the best makes with the Mitutoyo 500-196-20 0-150mm 6-inch Absolute Digimatic Caliper being popular on Amazon.

Extra: When using power drills, get or fit a depth stop. Setting this to the depth needed will prevent drilling too far – through the surface of the baseboard for example.

Getting angles correct is fundamental to accurate baseboard table construction. For the joinery of the basic framework for baseboard and legs it’s critical and often the most overlooked element.

It’s all too easy to do a rough cut or use a protractor to loosely mark out the angles for joints and not worry about being a few milli-meters out here and there. But these inaccuracies combine and multiple as more joints are added and before you know it you have baseboard with edges that aren’t square and legs that don’t close or stand straight. 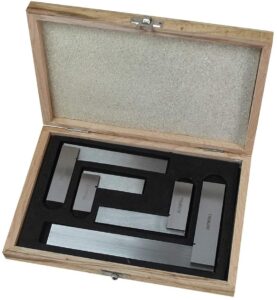 The most common 90 degree angles for which there’s a trusted tool no woodworker should be without is the set square.

Avoid cheap set squares as they don’t last and may even be incorrect, being fractionally off 90 degrees. Instead go for a quality square such as the engineers square set built to demanding standards (BS 939, or DIN 875 in Europe) so we can trust them.

While a square will work wonders for 90 degree joins for all the other angles the Bevel Setting Protractor is needed.

Although not strictly necessary for making baseboards, it’s often very handy to not just mark but also measure angles during construction. And just like the bevel setting protractor above, the Silverline Easy Angle Protractor Rule is ideal for both wood work and model work. Although made from heavy duty steel and so robust enough for wood work the two 12″ rulers are small enough to be usable on model work.

By using these tools rather than guessing or using an everyday tape measure, your baseboard construction should be a lot easier. If you found this post of use, you’ll also like it’s what wood to use for model railway baseboards and tools for model railways.