DIY People – Making Your Own OO and N Scale Figures 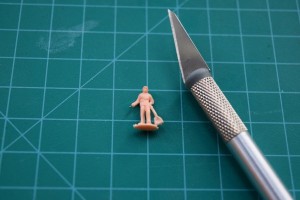 I’m constantly on the look out for tiny plastic people in new or unusual positions that will add interest to my model railway. While browsing the other day I noticed the Preiser Adam and Eve combination kits for Gauge 1. This set me thinking about making OO and N scale figures.

Preiser’s Adam and Eve combination kits are a Frankenstein-dream for modellers. The two kits have an assortment of legs, arms, heads and bodies that can be glued together to make men and women in any position you like.

Wonderful except they’re in Gauge 1 scale! Way to big for my N and OO gauge model railways.

But looking at the disjointed arms and legs set my mind racing.

There are plenty of unpainted N and OO scale figures available (Noch and Model Scene being two makes I’ve seen).

Looking at the Preiser Adam and Eve kits it dawned on me that instead of just using the unpainted figures as they come they could be “operated on” to make better figures and in positions and poses to my choice.

One figure I’ve been looking for is a miner, shovelling, for my scratch build mine and I’ve yet to find one I like so – armed with a scalpel – I went to work on a collection of unpainted Model Scene N scale figures – the same techniques work just as well on OO scale models.

The specific pack I used as a base was “5156 unpainted figures” as this had several people with spades which can used as the base for my diabolical experiments on little people but any unpainted figures could be used.

Firstly, I selected the raw figure to work with from the 20 figures supplied in the pack. This guy was a good match for what I wanted – he has a spade and is standing upright he can be easily shaped to the bending position I want.

Next his spade was removed and the poor guy cut in half. 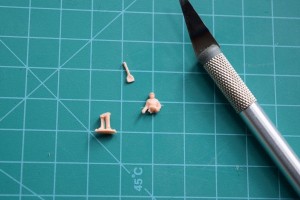 With this done I then tried shaping the join so the guy would be bending over when put back together.

After some experimentation I found using a heated scalpel to melt the plastic where I wanted was easier than cutting when working at this size.

I also took the opportunity to clean up the spade, removing some stray plastic around the edges and giving it a clearer profile.

With the model cut and shaped, he could then be put back together in his new pose and the spade re-attached in its new position. 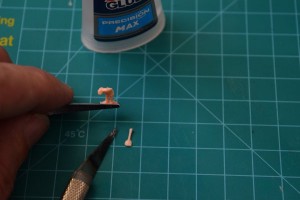 I had a few trial runs, positioning his torso onto the legs to make sure the fit was good before using a fast setting glue to reduce the drying time and avoid risk of one half slipping out of place.  The spade was added likewise. 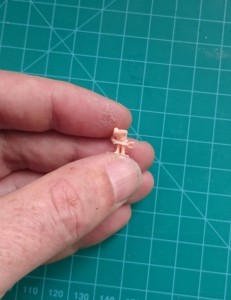 So far I’m reasonably pleased and will be making some more figures from the set before painting them and then removing the base (I leave tis on for the time being as it makes holding them easier). Keep watching for the update on painting.