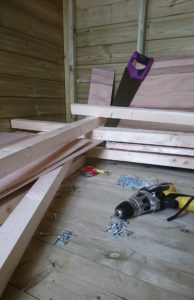 It’s all go for my new layout, the shed is sorted; baseboards are down and the layout design complete. The track plan however… That’s another story.

As regular followers of this model railway blog will know I’ve recently started working on a shed to accommodate a new layout.

While I could just have run a worktop for this around the inside walls of the shed I wanted to incorporate a workbench and so opted for a slightly more involved configuration.

Essentially, I’ve run a baseboard down the length of the shed on one side, this then meets a cross section before running up the opposite side to create a U shape (the door being at the open end). Where it gets interesting is that cross section is hinged to fold up revealing a workbench underneath.

When I want to run the trains, I fold the top down so the track can run all the way around. (Track will be joined across the folding boards using this technique).

When to modelling urge gets to me I just unclip the track joints and fold up that section board to reveal a workbench below.

It’s a neat practical and space saving design that maximises the amount of space available.

To build this I used standard 4×4 timber for the legs and support joists with 2×4 cross beams supporting 9mm thick Ply top boards as detailed in the article on baseboard wood. The picture below from my Instagram feed shows this and the shed installation in mid-construction

Using a tip from a previous post, the underside of the boards have been painted white to improve visibility when working on the otherwise darker underside. The top side will be painted another colour which I’ll cover shortly.

The results are a framework strong enough to stand on (yes, I’ve tried) and baseboards that are thin enough for power and accessory leads and arm of point motors to reach through while still being strong enough to support the weight of the layout.

I’m a big believer in creating the landscape and design concept of layouts before thinking about track planning (just as real-life track is laid in and around an environment, not the other way around) so with the U-shape baseboards erected I’ve been fleshing out layout features that will fit around the baseboards but are also contextually and geographically appropriate.

I want the railway to be set in the Network Southeast area, with a location somewhere around Wimbledon but borrowing from Guildford and Woking where I now live and commute through.

After a bit of thinking I’ve picked a specific part of Wimbledon (Merton) to model. This is the area between Wimbledon and Tooting.

This is the area between Wimbledon and Tooting. It’s where I grew up and know like the back of my hand.

Summoning childhood memories, I remember a line that ran from Wimbledon Station, behind my house, and off to Croydon with a disused fork leading off to Tooting. Fond memories of walking my dog Max along the abandoned section, exploring the track, station buildings along it and the River Wandle valley come to mind. I’d throw a ball or stick, Max would disappear into the undergrowth and I’d run after him to find he’d uncovered a half buried sleeper or platform and we’d spend the rest of the day digging around further railway debris.

They were great times and my layout will recreate these memories and the landmarks, buildings and scenery which I frequented all those years ago, notably.

(Water-mill at Merton Abbey Mills from Miklos Kiss on Vimeo)

To this will be added several buildings which I’ve discovered in my research on the area or from nearby in the Network Southeast region, specifically from around Guildford and Woking that I live and commute through, notably:

Mix this Wandle Valley setting with the design and livery of Network Southeast and it’ll be a fascinating and fun project to build.

Regular readers will know that I’d tentatively named the layout Windon. – a play on Wimbledon and Wandle. That didn’t last long.

From the above description, it’s obvious that the central theme of the layout is the River Wandle so I’ve changed the name of the project to reflect this.

It’s now called Wandle Valley, So watch out for this in future Model Railway Engineer posts.

With the layout concept and design fleshed out, my attention turned the track plan and I’ve been sketching out ideas.

The line that ran behind my house and the abandoned fork to Tooting that I followed on my childhood travels was part of the Tooting Merton and Wimbledon Railway line. This came from Tooting, running through Merton Abbey, Merton Park and then to Wimbledon where it met the main line from Guildford to Waterloo as seen in this early map.

It was a double track line and with sidings for the previously mentioned Tri-ang factory and the smelting works.

I’ll be creating this with EM gauge track that will run from one end of the U baseboard to the other.  Wimbledon station being at one end and Merton Abbey station at the other. The Wimbledon end station will also have the non-operational track passing through it representing the mainline to Waterloo.

As mentioned before, the layout will also feature a narrow gauge (009 gauge) line and sidings. This will most probably be located near the smelting works with a solitary diesel transferring goods to and from between the above-mentioned siding and around the smelting works.

Somewhat frustratingly I’ve yet to find a map of the track around Merton Abbey station (although there’s some great info on the Southern Railway E-mail Group (SREmG) This lack of a reference source and fitting in all the track around Wimbledon station is proving a challenge to the point where none of the track plans I’ve come up with yet work.

More problematic is that none of the track planning applications I have work for EM Gauge! so I’m having to do things the old fashion way and draw them on graph paper. Not my idea of fun and it’s slowed slowed my progress. I was hoping to have a first track plan ready for this post but alas not.

I was hoping to have a first track plan ready for this post but all this has slowed my progress.

Until then, if you have any pictures or memories of the Tooting, Merton and Wimbledon Railway, the Wandle area, Merton Abbey Station or the Tri-ang factory I’d love to hear from you and swap stories.