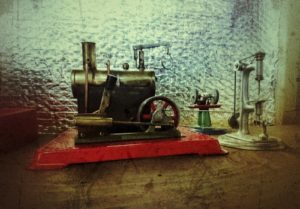 Using a Mamod engine and Wilesco accessories as model making workshop? Will it work?

I have an electrical feed from my house to the shed. This feed powers my railway, lighting, heater, compressor, extractor, assorted tools and most importantly a kettle! The only thing missing is a fridge 🙂

It’s my man cave and it suites me perfectly and it’s where I do a lot of louder, messier, work.

Unfortunately, the other day something went wrong with the electrics and I lost power to this garden den.

I’d hoped to get some modelling on this particular day.  Namely some OO scale scratch building and starting on the Sterling engine project.

This work required the pillar drill or my trusty Dremel but without power, I was scuppered.

But then my creativity kicked in.

In another corner of my shed is an old Mamod engine that I’m fixing up. There are also a few Wilesco workshop tools that attach to it. A Wilesco pillar drill in particular.

These are fun to watch but surely they’re toys and not suitable for actual use?

But without power and drill work to be getting on with it was time to find out.

I topped up the boiler of the Mamod engine, lit the burner and let it build up a head of steam.

Next came plastic bottle that will be used as the cylinder for a proof of concept Sterling engine and which needed holes drilling.  I placed this under the Wlesco pillar drill, flicked the flywheel and it burst into life, rotating the drill bit as it should.

The drill bit isn’t really a drill but a shaft with a flattened head on it and I was doubtful it would work but work it did.

It took longer than it would have taken with a normal electric drill but it the holes as required.

I was making a trains parts with a steam engine!

A short time later, I’d drilled the holes required and without an Amp of electricity.

The steam and burner had even warmed the shed up a bit.

Sure, these tools aren’t  ideal but it was a fun experiment and made the modelling more interesting although slightly slower.

I’d love to hear from anyone else who uses their Mamod and Wilesco with workshop tools for real too.

How far could you take these tools and a Mamod or Wilesco engine? Could a model making lath or band saw be driven?


Get yours here.
Follow
MRE uses cookies to give you the best experience on our website. If you continue to use this site we will assume that you are happy with this.AgreeNoRead more
Revoke Cookies