From tin-cans to trains – an engineering project for 2018 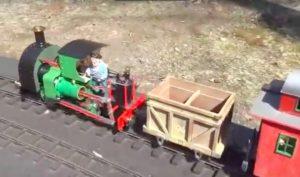 Can I build a fully working model train but using a Sterling engine instead of steam?

Okay, this is a bit out of the usual Model Railway Engineer projects but it ticks all the boxes for what this site is about: model railways and the engineering surrounding them.

It’s also going to be a fun, fascinating, project that’ll answer some common questions that about track etc come up in construction of normal model railways

And on that subject, don’t worry. This is just a side build project to the main focus of this blog, and my the usual Hornby-esq model railway making adventures, tips and reviews will continue as normal.

If you’re not aware what Sterling engines are, they’re a fascinating device – conceived in conceived in 1816 by Rev Robert Stirling and his brother James – that uses temperature differences to generate mechanical movement. No steam, no water, no boiler.

Here’s a video explaining how they work.

I’ve long been intrigued by them and over the Christmas break I was reading about them and when I had a thought.

They were originally invented as a rival to steam engines although this never caught on but, I wondered, could a model train be built with one? With a boiler and water they’re lightweight and very efficient and have the power so why not?

A bit of digging turned up this glorious piece of German engineering:

My mind was made up.

Now my engineering isn’t up to that seen in the videos but he basics of Sterling engines aren’t that complex.
Not needing water or a boiler for steam production they’re a lot easier to build. In fact, there are plenty of YouTuber’s who have built basic Sterling motors out of common house hold objects. Here’s a very simple one built from cans.

It’s not difficult to see that adding a flywheel connected to drive wheels along with two free running wheels; improving the structural integrity and placing it on rails (to reduce friction) would give the basics of a locomotive and railway as seen above.

And that’s my goal.

There’s obviously a whole lot more to it but it should be a fun experiment through which a lot of railway, engineering and model making skills can be learnt.

I’d love to have some others join in with me on this to share knowledge and ideas along the way so if you’re interested drop me a line. I’m aiming to do it cheaply and with the need for expensive parts of tools, Meccano will feature heavily, and it’ll be a nice alternative to live steam Mamod engines that I also dabble with*.

A post shared by Andy, Model Railway Engineer (@modelrailwayengineer) on Jan 6, 2018 at 5:12am PST

Get in touch if its something you’re interested in building. In the meantime, if you’d like a model sterling, as seen above from my Instagram page, they’re available here via Amazon. They’re a of fun to watch and help understand how this wonderful engineering concept works.

* Interesting historical note: the creator of Hornby trains originally started by making mechanical kits, these becoming Meccano. Mamod live steam engines were and are compatible with Meccano sets. Meccano, steam and model trains have always been closely related and for a while this blog was going to be called Steam, Trains and Meccano.