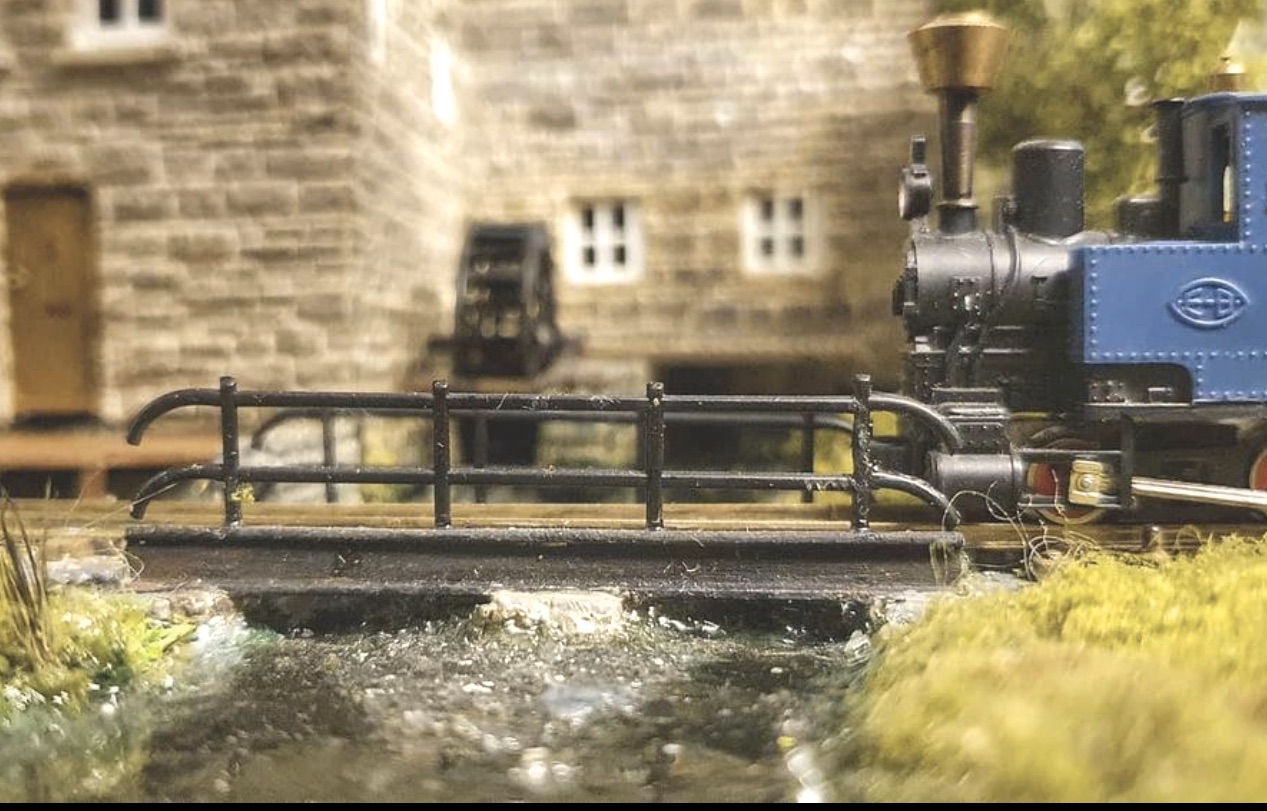 Starting on the scenery.

If you’ve been reading the previous posts in this series on making a model railway, you’ll have seen the recent articles on making a mill house with a moving water wheel.

A water wheel naturally needs a water course to turn the wheel and making this has been the focus of my attention for the last few weeks.

As described here, and seen in the layout plan below, the river runs back to front on the left of hand side.

To cover up the awkward disconnect between layout and back scene where the river exits the layout, I’ve used design feature seen in many mills, such as the one at Cobham Mill in Surrey shown below, where part of the mill building runs across the river forming a bridge. 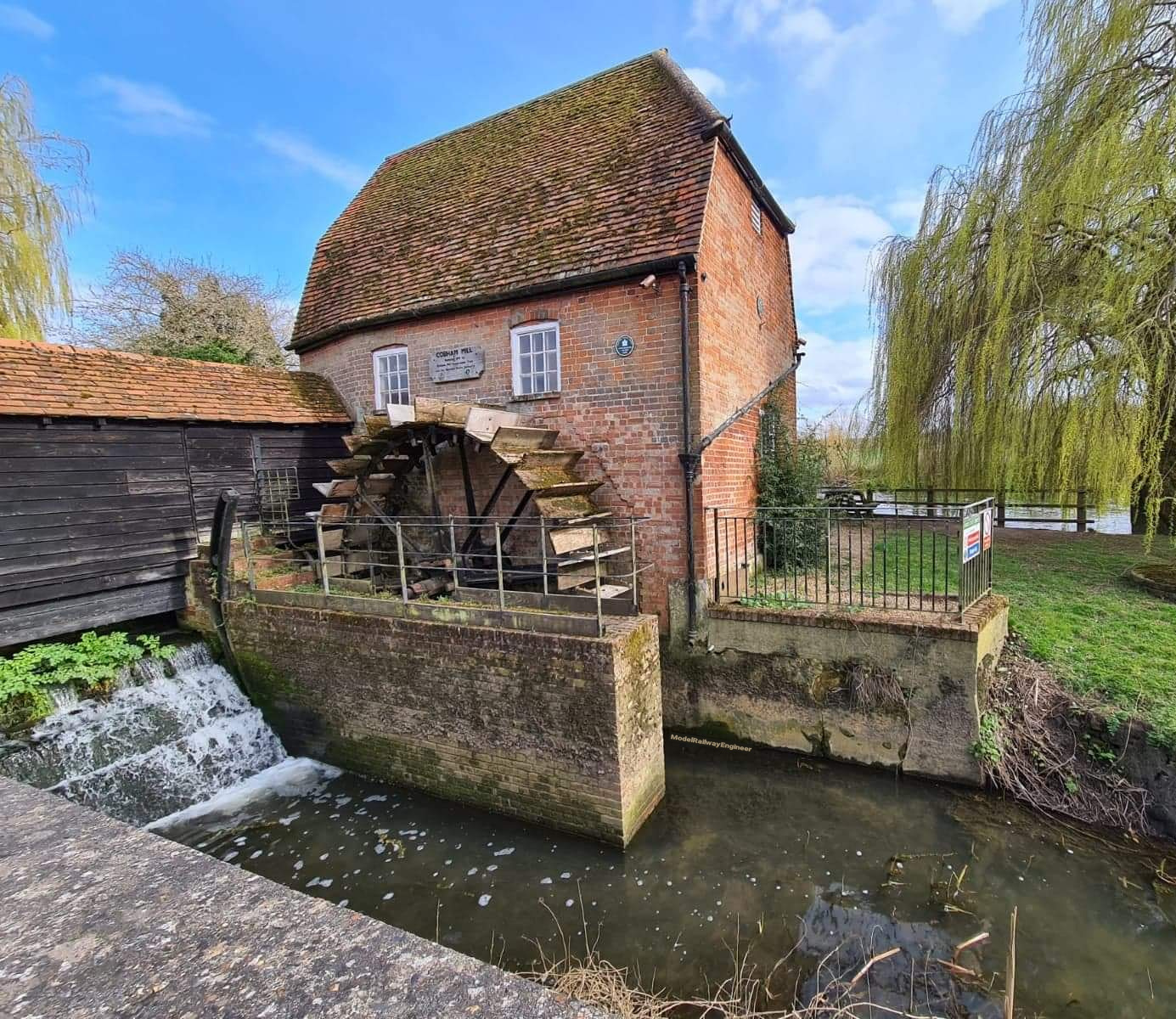 As explained here, my mill does exactly this, with the river disappearing under the mill building rather than crashing into the backscene.

These design elements gave me a position and path for the river.

An earlier decision to layout foam on top of the baseboard made the carving much easier as I then only needed to cut away the foam rather than chisel into the baseboard surface.

With the channel cut, air drying clay was applied to the sides of the channel to create the river banks. This allowed me to shape the river banks to have a gently sloping look of a slow moving river rather than the steep bank of a faster flowing river. This probably won’t be visible once vegetation and water is in place but I’ll know it’s there and the detail is right.

These and river bed were then painted a dark olive green, blending into darker shades towards the centre of the river, before adding foliage – a mix of my own DIY bushes and Woodland Scenics version – along the water edges. Green colouring was also added to the stone work of the mill house and pier where it will meet the river – to give a moss growth look.

Finally, I knocked up a mock bridge to support the railway track where it crossed the river. As mentioned above, I didn’t cut away the foam boarding under the railway track but rather cut the channels either side of it. This left the track support in place and means I just needed to create the visible frontage of the bridge.

This was done using some plasti-card stone sheets for the stone pillars which were then glued to some plastic from another model kit that helpfully looked like a girder. These where then carefully positioned into the river channel and to the front of the foam below the track.

Creating the channel for the water wheel

With that done I then formed a place-bolder for the mill-race pier and sealed both ends with liquid latex so I’ve had a trench clear of water for the waterwheel to sit in.

The placeholder was made from air drying clay and the seal around it and at the ends from liquid latex.

This wasn’t as straight forward as it seems and lead to a near disaster for the layout but that’s another story.

The water, Woodland Scenics Realistic Water in this case, was poured in and left to set.

Adding ripples to the river 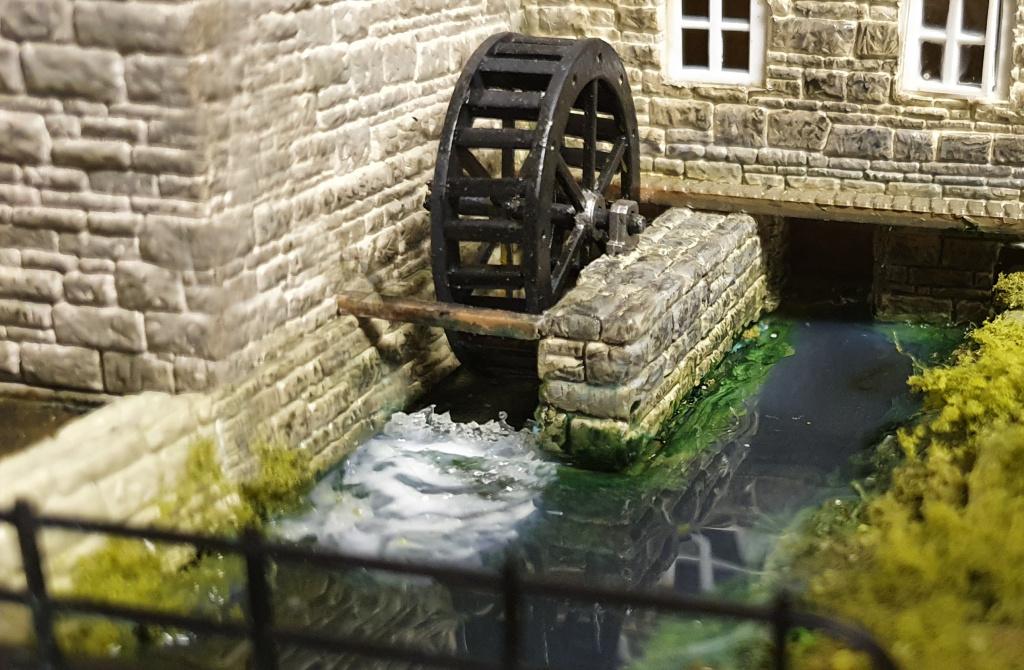 Where the water emerged from the under water wheel and from bridges I wanted white water.

On other layouts, I’ve dragged a small point through the water mixture while it was still pliable but this time I tried an alternative technique that I’ve found while making a culvert.

Essentially, I took two tiny bits of cling film (no bigger than a finger nail), scrunched one into a ball and the rolled the other and then opened them up again before gluing to the ‘water’ surface with PVA, just in front of where the water wheel will sit and the bridge piers.

Rolling the clingfilm up creates lines in the film replicating the look of a series of waves emerging from the water wheel while the scrunched up ball has more a random look suitable for waves as water laps around a pillar in the middle of the river (supporting the bridge).  The surface of the ripples was they dabbed with with enamel gloss white paint and the area then dry brushed, again with white paint, creating a convincing look and feel.

There’s still more to do, I’m not completely happy with the vegetation around the front river section and need to tone down the green off the stone work moss. The rail bridge supports also aren’t big enough and need set further into the land either side of the river but for now it’s enough to work with.

> This post is part of a series on the construction of a lifelike model railway for exhibitions. To read other posts in the series covering its development, track work, scenery and model building making, see building an exhibition model railway.

A final, personal, note: I spend a huge amount of time testing, photographing, writing and researching techniques for these articles and pay for all the running costs of MRE out of my own pocket. If you found this article useful you can support me by making a donation on my fund-raising page. Thanks and happy modelling, Andy.
Updated:Thursday, December 9, 2021