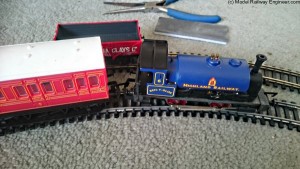 Last weekend I picked up a bargain of old Hornby OO railway set at my local boot fair. I gave the loco electrics a quick check on the day and then put it away for a rainy day. This morning, with a few hours to kill, I tried it out.

The set was an old Hornby Country Local R904 pack which included the lovely 0-4-0 ‘Ben-Y-Gloe’ loco, 3 coaches, transformer and a controller. Eight pieces of R605 curved track and 2 R600 straight sections were also included – enough to make an oval. It was a bargain at the price I paid and is why I love going to this boot fair in Guildford, there always seems to be some model railway related items being sold.

The first thing checked on unpacking it this morning was the track. Close inspection revealed a lot of TLC was needed – it was caked in grime and dirt and several of the rail joiners had been snapped off. It was in a poor state.

Removing the broken joiners was harder than I expected. There was little surface area to grip and over time they’d become locked tight on the rails. A bit of gentle tugging and pulling with flat nose pliers eventually shifted them and they were replaced with some nice shinny new joiners I had spare. 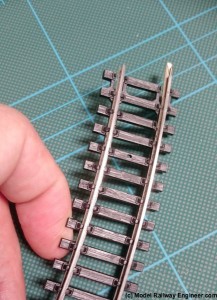 The dirt on the rails can be seen on the top right corner of the track.

The dirt on the rails was just a case of scrubbing with a Peco track rubber and then giving it a final clean with a Rail Pal rubber and damp cloth to remove the dust.

With the track cleaned and joiners replaced it was then a case of snapping it all together creating the oval and attaching the wires using the included power clip. This all went smoothly and I was ready for the grand test.

Ben-Y-Gloe was placed on the straight, the three carriages attached and with baited breath the power gently turned up.

The engine just sat there – lifeless…

I’d tested the loco with a battery when I purchased last weekend it so I knew the problem wasn’t with the train electrics. The train was sitting on the section of track where the power was applied so it was a conductivity issue between sections of rails. It may have been dirt on the wheels but they looked fairly clean.

It was likely to be one of three things – the transformer, the controller or a break in the wires/power clip.

A quick check with a Multimeter confirmed the wires were sound as was the power clip.

So my thoughts turned to the controller and transformer. I swapped out the controller with a unit used for another railway and tried again, still nothing.

It could only be the transformer and sure enough on hooking up another transformer the train shot off around the track – I’d forgotten to turn down the power on the controller and it was still in its original position – but the train set was now working.

The train pulled the locos most of the way around without problem but stopped on one section of track. A quick further session with the track rubber remedied that problem and the loco and its carriages ran around the oval circuit faultlessly.

It’s a credit to Hornby that a nearly 30 year old train set works pretty much without problem after only a little cleaning!

I”m not sure what I’ll do with the railway set. I may just keep it for a ‘play’ set for entertainment in the living room for those times when I’m feeling really lazy and don’t fancy climbing the stairs to the ‘engine shed’ in the loft. We’ll see.

Footnote: On further examination, it turned out to be the fuse in the plug to the transformer not the transformer itself that was at fault, so now the entire set is working. Building and in this case repairing model trains is much easier with the right tools, take a look at my tools for model railways start set.