Rebuild, revise or carry on? 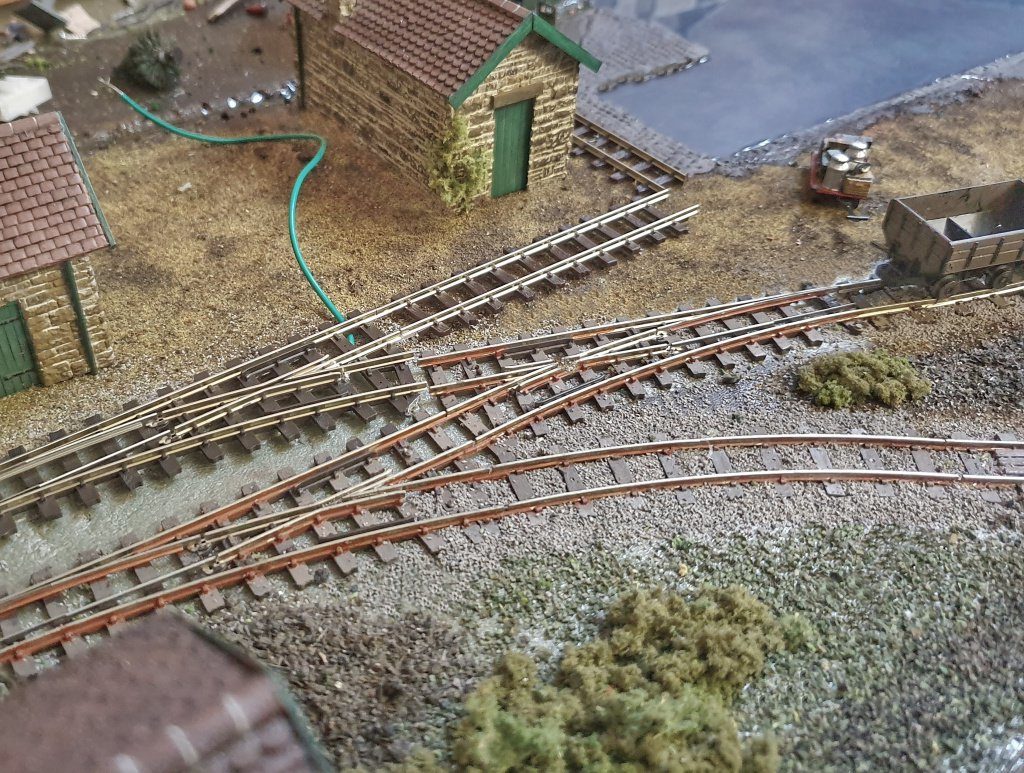 As regular readers will know, I’m currently building a model railway based on a 4mile long narrow gauge railway that ran from St Austell to Pentewan in Cornwall.

My reference for this has been site visits to see the harbour and what remains of the buildings and track in the area and the Pentewan Railway 1929 to 1918 by M J T Lewis.

I then found this track plan of the harbour area by Carl Arendt.

From these disparate sources, I mapped a simple, fairly imaginative, track plan of what might have existed and featuring genuine elements of the little line my research has turned up. Notably, the harbour, a raised trestle siding for loading, China clay cellar and engine shed.

All has gone well, with the track laid, Tortoise point motors and points working, DCC power bus and track power in place, the harbour well underway and some scenic elements starting to be constructed.

One thing troubled me, however.

On a visit to Penetwan, i observed the remnants of the track around the harbour and along one particular side of the haven in particular.

This line was obviously an additional track to the main raised trestle line to be used for loading wagons with cargo to ships but it would have been too short for a locomotive and I couldn’t for the life of me figure out where it connected to the other track.

The answer plus a whole bigger problem came while browsing an online book-seller for information on another old line I’m interested in. This being the Surrey Iron Railway but that’s another story.

Anyway, while browsing the booksellers stock I spotted Rail & Sail To Pentwan by Johm Henry Drew.

This was apparently written by a train driver on the Pentewan line and contained first-hand accounts of life on the railway and ships in the harbour.

I snapped it up and was happy when it arrived.

It’s a lovely little book packed with lots of useful information and stories from about the railway I didn’t previously know. This included that the engines were placed on the line looking towards Pentewan and so pulled freight to St Austell in reverse (this was apparently to allow the drivers to see the water level when the engines climbed up the steep gradient to St Austell but left the crew exposed to the weather) and, intriguingly, a reference to occasional cargo loads for the local ‘bone mill’.

This is where bones were crushed for fertilizer. There’s a gruesome story elsewhere on the Internet of human bones being bought in from German to another bone mill (in Norfolk) and I can’t help but wonder if something similar happened here, either way, it’s something I wasn’t expecting but now have incoporate onto my layout!

Most usefully and incredibly frustratingly, the book also contained a detailed map of the line itself. 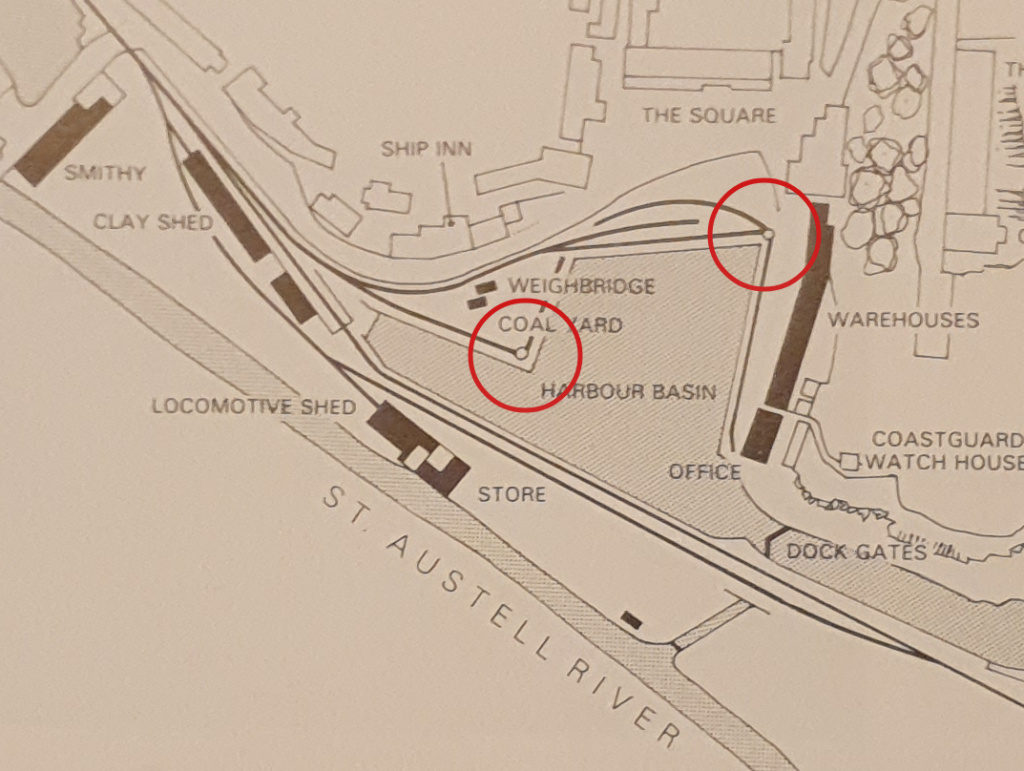 If only I’d found this earlier. The map of the Pentewan narrow gauge railway from 1907 in Rail & Sail To Pentwan by Johm Henry Drew .

And this gave me the answer to where and how the mysterious harbour-side line connected with the rest of the line.

As you can see in the map, the Pentewan railway runs down from St Austell (to the left), following the river, until it forks.

One line leads to an engine shed and a raised trestle line running parallel to the harbour (as I have on my layout) with another going to offices, china clay stores and a smithy all set just slightly inland, and again loosely recreated on my layout.

However, the line to the stores also subsequently splits again providing additional lines around the harbour.

And it’s these now lost lines that provided the connection to mysterious short perpendicular harbour-side lines I’d seen and they were connected via small, long since vanished, wagon turntables. These as can be seen in the map above, where I’ve highlighted them in Red. Mystery solved.

The option to have a small turntable and siding to a bone mill with the building backing onto a river for a water wheel to drive the mill is really appealing.

But I’d laid the track. To incorporate these would require either a complete rebuild of the layout or a revision or I could just forget the turntable and bone mill entirely. Very frustrating. Super annoying.

In the end, the temptation to incorporate turntables and bone mill was too great to ignore and after a little deliberation, I realised I could incorporate these into the current layout just with some revision and avoid a complete rebuild.

The revised plan for my Pentewan layout; now with wagon turntable on left of the harbour; an extended siding and river running down alongside the track, more like the prototype line.

Revision it was then.

First up, was to make space the space for the bone mill and line supplying it.

This was relatively straight forward, I already had a siding off the headshunt on the main line to service a china clay cellar and it was a relatively simple matter to extend this to run up to a river I’d already built to provide space for water-wheel driven bone mill. 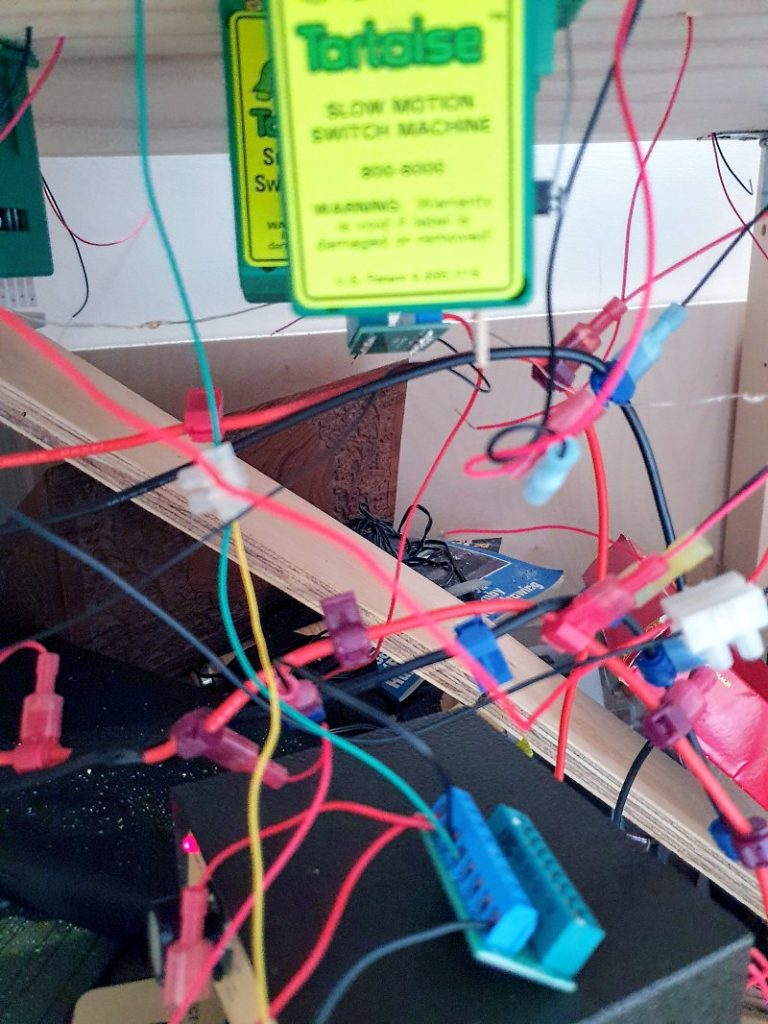 Work in progress while rerouting the main DCC bus wiring. Amazingly, once done and reorganised after this, it all still worked.

It did require extending the DCC bus wiring but I’ve been thinking of redoing the underboard wiring for a while so took the opportunity and ripped out the existing wiring and relaid it.

This resulted in an almighty spaghetti of wires while I rewired it (see left) but amazingly everything still worked afterward.

The additional harbour-side line would be more painful.

While the new line would be for wagons only and so didn’t need to be powered it would require the harbour to be reshaped.

With a heavy heart, I ripped out the painstakingly created water effect, reshaped the edges and placed air drying clay for the stone walling all the way around. Then I repainted the base in appropriate murky green/brown and repoured the water.

With that in place, I fitted a new point to and ran a line to the harbour. At the end of this, I fitted a Peco 009 (SL-427) wagon turntable and then ran a short stretch of track at 90 degrees from this alongside the harbour, just as can be seen in the prototype map and in my revised track plan above. The photo at the top of this article shows the new track falling into place, albeit it without the turntable.

In the end, I’m much happier with the layout.

The wiring is tidied, the track plan has more elements of the prototype line, I have a mini turntable to add interest, the harbour looks better and I can now add a gruesome bone mill.

I just wish I’d found the book with map earlier but hey ho, it’s all worked out for the best.

Always leave yourself extra bus wiring for future expansion; don’t dig too deep into what bone mills did (ewwwh!) and if you have a water feature, do it last: cutting out dried water material (in my case PVA) is a nightmare and depressing if you’ve spent ages getting it to look just how you want it only to then have to destroy it 🙁