How to clean model train wheels, fixing a train that stops and starts. UPDATED for 2020 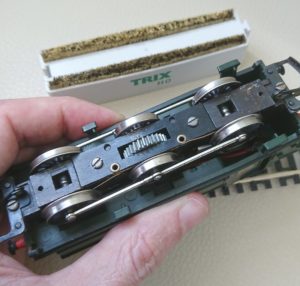 You’ve found it. Abandoned in your childhood, a long forgotten Hornby loco has been rediscovered. A childhood memory reborn. You dust it off and plant it on the track. The expectation builds.

You apply the power. And….

Deflated but hopeful you try again. You give it a nudge. It splutters into life but dies again.

This is an all too common tale. One that I’ve experienced myself just recently.

A while back my dad came across an old Southern loco from my youth (which, oddly, I didn’t recall having) but on trying testing, it ran, stopped, started and stopped again.

These symptoms are usually caused by a common maintenance issue.

Our trains pick up the power needed for their motors from the rails but over time the wheels can get dirty and this muck impedes the flow of electricity from the rails.

And in extreme cases, where the dirt deposits build up all the way around the wheel it will stop the train moving completely.  More often, gunk builds up at one point on the wheel circumference and the train runs until this point comes into contact with the rail and then cuts out as the electricity flow gets blocked. A train stopping and starting every few inches is likely a sign of dirt on part of the wheels.

And dirt and muck will build up not just on locos in storage but also those in regular use. Wheels just attract dirt. It’s annoying but just something we have to live with.

Luckily, the remedy is easy

Pick up your loco, turn it over and examine the wheels.

On most engines, you’ll see pickups — little strips of metal resting against the inside edge of the wheels. In the above photo of one my locos, these can be seen on the front and rear lower wheels. These transfer the electricity from the wheels to the motor inside the locomotive.

It’s the wheels with these pickups that you want to focus on.

Look closely at these wheels. Is the surface that rests on the rails isn’t shiny or is there a noticeable build-up of dirt on them.

If so, they need cleaning.

What to clean model train wheels with

If the build-up is slight, you can probably get away with just wiping the wheels with  Isopropyl Alchohol. This fluid works great although it can get expensive if you need to do a lot of cleaning.

A cheaper longer terms solution and one that’s particularly useful for heavier deposits of dirt, grime and muck — as might have built up if the loco has been in storage for a few years or it hasn’t been cleaned for some time — is the Trix cleaning brush which while labelled for HO will work perfectly on OO gauge locomotives too. It’s also available for N gauge and in America, links below.

These are wonderfully simple little accessories that will scrub wheels clean and shift pretty much any dirt.

They are placed on the track and the loco seated on the metal brushes. Current is drawn up from the track so the wheels turn and as they spin they rub against the metal brushes, dislodging caked on grease, grime and dust. Dirt doesn’t stand a chance.

It’s much quicker and easier to use than any other wheel cleaning technique I’ve come across, and cheaper in the long run too.

And as mentioned by one of the reviewers on Amazon, where it gets 5 stars, it also has the not inconsiderable advantage that the displaced dirt falls downwards and away from the wheels and gears. (When cleaning with a screwdriver or fibreglass pen, the loco or tender — in the case of tender powered larger locomotives — is held upside down while the wheels are scraped. The problem here is that dislodged dirt then falls into the wheels and gears, creating even bigger problems. With the Trix this doesn’t happen).

Here’s a video by a model railway Youtuber showing it working.

The only thing I’d add is NOT to use it with locos that have rubber traction tires, it’ll destroy them in seconds, but for all other wheels, it’s now my preferred cleaning technique.

I’ve been using the Trix cleaning brush for both my N and OO gauge locos for a while now and wouldn’t be without it. It’s easy, simple and effective and got my old Southern 0-4-0 running in no time.

Full disclosure: No money or gifts were exchanged for this review. I bought the product at the advertised price via eBay or Amazon without the supplier knowing it would be reviewed on Model Railway Engineer. The links on this page may take you to Amazon or eBay allowing you to purchase the product under their affiliate programmes by which I get a small commission on any orders placed although the price you pay does not change.

MRE uses cookies to give you the best experience on our website. If you continue to use this site we will assume that you are happy with this.AgreeNoRead more
Revoke Cookies