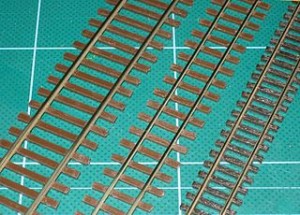 If you’re just starting out in model railways one question that’ll you’ll invariably want answering is what are scale and gauge? What’s the difference between them and should you worry about them?

When it comes to buying and running model railways you’ll often come across gauge and scale. These two innocuous-sounding words relate to the size of your model railway and although often used interchangeably they mean very different things and shouldn’t be confused.

I’ll start with Gauge, for no other reason than it’s the easier of the two words to understand.

Just like full-size railways, the gauge of your model railway measures the distance between the rails on the track.

There are four track Gauges commonly used in UK railway modelling. From largest to smallest these are:

Scale is the ratio between the size difference of your model to its real-world equivalent. The models you see on model railways aren’t just shrunk until they look about right but are all accurately reduced versions of their real-life counterparts, with every part reduced by the same amount.

The common model railway scales being:

So is it Scale or Gauge?

Now you’d be forgiven for thinking that if every object in a model railway was shrunk to the same scale then the tracks would be scaled down to the same degree as the rest of the set so the rails would be proportionately the same distance apart as buildings and figures are to the train.

For a variety of reasons, the scale factor used to get set the distance between rails is often slightly different to the scaling factor used for the rest of the models so we end up with railway scale and a track gauge.

And, it’s possible to buy two trains with the same gauge but with different scales. OO and HO scales being the most obvious. These both use the same Gauge of track – 16.5millimeter – but OO models are slightly larger than HO (HO standing for Half O).

In most cases this difference is hardly noticeable but if you’re a stickler for accuracy and want your railway set to look just right it’s always worth checking that your purchase has not just the right gauge for your track but the same scale ratio as the rest of your layout.

TIP: If you’re looking for a guide to tunnel sizes for different sizes, Elgin Model Railway Club have done a great guide here.

This post is part of my beginner’s guides. For more like it see my guide to Hornby how to guides and the top 4 best model train sets.

> A final, personal, note: I spend a huge amount of time testing, photographing, writing and researching techniques for these articles and pay for all the running costs of MRE out of my own pocket. If you found this article useful you can support me by making a donation on my fund-raising page. Thanks and happy modelling, Andy.