As long term readers of MRE will know, I’ve got a bit of a thing about Cornwall and it’s where the first element of my bigger layout is being based on.

It started in Dece 2014, with a small N gauge layout based on St Blazey and Par near St Austell. This evolved and became Landreath which was still based in the area but now included more of the mine workings in the nearby hills. 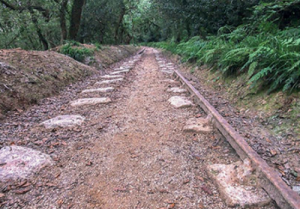 The remains of a mineral tramway in Lluxulyan Valley.

It retains the fascinating Tin and China clay workings found around the area (particularly in Lluxulyan Valley) but the railway aspect has changed.

It will now be based on the narrow gauge mineral railway line that carried ore, clay and coal between the mines around St Austell, past Par, and to the dock and harbour at Pentewan.

And going narrow gauge railway has an extra blessing.

Narrow gauge lines can be modelled in 009 or HOe scales. This essentially means track of the same width as N gauge but with buildings to OO/HO scale. As such, I could fit in a lot of track into a small area. it also means the models are bigger than N gauge and so my eyesight problems aren’t such a challenge.

Using HOe means I can feature more of the line and so the layout will show it running from the harbor and docks at Pentewan, crossing the White River that the rail track ran parallel to for much of its length before disappearing into a tunnel under the hills that rose up towards St Austel.

Near the dock will be goods sheds, offices, cranes, sluice gates and other buildings and machinery servicing the harbour and freight handling.

In the hills will be signs of the mine workings although these buildings will be scaled down to give an impression of distance.

As mentioned, this line was a narrow gauge industrial line but once a year carried a party of children from a Sunday School down to the beach for an away day and so I’ve stretched the truth a little bit and incorporated an imaginary station / Halt where the children could disembark.

This will be achieved by concealing the ends and rear of the oval.

When viewed from the front viewers will only see a straight section of track leading to the harbour and yards yet trains will operate continuously and change frequently so keeping it entertaining.

This combination of an industrial harbour / dock area, goods yards, station and mining area but all based on an oval track plan so allowing continuous running is what I’ve been trying to achieve since I started my Cornish layout.

I’m finally really happy with it and hopefully means there won’t be any more major redesigns.

Lastly, and hidden from view at the rear will be a fiddle yard with spurs. These will be used for storage of trains before they make their way onto the visible layout but will also provide the link to the bigger Great South Railway project of which Pentewan is just one, and the first, module. In future, I can just extend the spur and link across to other baseboards making up the rest of the layout.