As a break from building construction for the layout, I painted a few more animals that will be live around the railway.

Chiefly, these were a grey heron and a dog.

Unlike the pigeons I’ve painted previously, I haven’t had the luxury of having a heron visit our garden and so had to turn to the Internet (wikipedia) for reference photos.

It was primed first with a Citadel rattle can grey undercoat and then painted a darker Vallejo stone grey. The neck was painted white with a dab of grey on the front with orange/yellow used for the beak, eyes. A sharpened cocktail stick was used to pick out the pupil in black. Final detailing was a touch of black on the head and neck and then some dark grey speckles on the lower wings to give the impression of feathers.

For now it looks right at home sitting on the river bank, watching for passing fish and really adds to the overall rural setting.

As a footnote, the colour change in the grey of the feathers between the photo at the top of this post and then on the layout shows the difference lighting can make. The first photo was taken under the LED lights on my workbench, the second photo – in position on the layout – was taken under strip lighting above the layout.  Once LED lighting is added to the layout he should look more like that above and closer to the reference colours.

The model itself came from a member of the MRE Facebook community who kindly donated it and the dog. 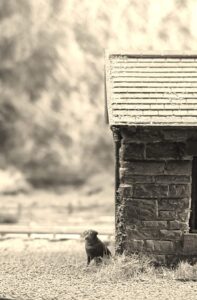 Speaking of the dog…

Initially, I tried making my own 3D printed dog, but the results were disappointing. Luckily, as mentioned above, a member of Model Railway Builders kindly sent me some which looked a lot better.

He (?) was painted with Vellejo matt black mixed with a hint of neutral grey to tone it down slightly — out of the bottle I find Vellejo’s black (72094) has an inky sheen to it which wasn’t right for a dog coat.

The muzzle and forelegs were dry brushed with Citadel Skrag Brown before a dark wash was applied all over to add depth to the recesses and tone it all down slightly further.

I’ve named him Tinker and he now sits by the door of a goods shed loyally waiting for his master to return.

There are still more figures to come but I’m enjoying the painting these and the difference they make to the layout is huge, they really add character and interest and bring it to life.

This post is part of a series on the construction of a lifelike model railway for exhibitions. To read other posts in the series covering its development, track work, scenery and model building making, see building an exhibition model railway.
Updated:Thursday, December 9, 2021