The History Of Cornwall China Clay In Eight Paragraphs 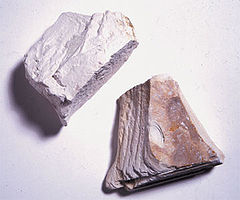 Alongside Tin and Copper, another substance has been mined in Cornwall for hundreds and years and is like it’s mineral counterparts has changed the face of Cornwall. Here’s the condensed history of China Clay in Cornwall.

China Clay was principally used in the production of porcelain and paper but today is used in the manufacturer of many materials that need to be whitened including paint and many oterh household items including toothpaste, light bulbs, soap and cosmetics.

Noticing a gap in the market, a chemist called William Cookworthy set out to find a local equivalent and in 1745, he found a Growan clay at Tregonning Hill, Helston and later St Austell.

Cookworthy then spent another 20 years perfecting the technique to make porcelain from this and in 1768. he established the Plymouth Porcelain Factory to making fine china and sell it the gentry.

By the early nineteenth century the St Austell deposits had become one of the largest deposits in the world, producing fifty per cent of the world’s China Clay.

By the mid 19th century 65,000 tonnes of china clay were being mined in the St Austell area every year, many villages grew up nearby villages expanded to support the industry and Charlestown, previously known as West Polmear, grew into a significant harbour with local landowner and entrepeneur Charles Rashleigh (from who the town now takes it’s name) investing huge sums on not just the harbour but houses and factories involved in China Clay mining and production.

Today, although  US and Brazil have overtaken Cornwall as world’s largest China clay producer there are still significant China clay mines and spoil heaps around St Austel (which has earned the area the local tag of The Cornish Alps) which dominate the local landscape while water wheels, mills, drying houses and mining equipment from the 18th and 19th Centuries can be still be found.

If you’re in Cornwall, the Wheal Martin China Clay Museum and Country Park is well worth a visit.