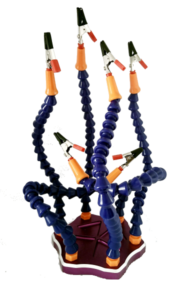 If only I had more fingers.

That’s something almost every modeller has uttered at one point or another.

Rather it’s holding small parts steady while still needing to hold brushes, soldering irons and other tools. Two hands are so limiting!

There are, of course, aids to help.

One of the most popular being the centuries-old Helping Hand jig.

As a tool, this been around for decades (okay, I exaggerated about the centuries!) and is a bread and butter tool for model makers. Many of the best model railways will have been made with these somewhere in the production.

Typically, they consist of two clamps mounted on ball-joints at each end of a metal bar, itself mounted on a joint secured to a metal base. They can securely grip small parts at a variety of angles leaving your hands free.

And, they certainly are a lot better than using your fingers but are still far from not perfect.

For starters, they topple over easily. I’ve wrecked painstakingly and lovingly made models crashing into the worktop. It’s more than annoying!

Then there’s the limited range of positions that they can hold.

For most variants, the joints holding the jaws are great but they’re fixed to a metal shaft which limits the range of positions and size of objects they can hold. Yes, you can move them along the shaft but they’re still limited to holding something along one axis of whatever it is you’re making.

If you need to hold a model, rolling stock or circuit board from one side and, for example, from the back the traditional helping hand won’t be much use.

There are some variants that have flexible arms but even these typically still only have two clamps. Want to hold three pieces of wire while they’re soldered? Think again.

Many are also cumbersome to adjust. The joints often use a wing nut and bolt that need undoing before the position can be changed.

Great if you just want to hold a model while paint or glue dries but if you want to frequently move it around — say during painting — it can be frustrating. (They do however have the benefit that once tightened they won’t slip).

Compare and contrast this with my camera gear.

Here I have an Octopus tripod with which I can bend the legs into pretty much any direction and get my Nikon DSLR where it’s needed.

If only someone could come up with an equivalent 21st-century model makers tool.

Something that employed multiple articulated arms for more flexibility in the positioning of the model.

Something that was taller to hold larger objects and higher off the work surface giving easier access from all sides.

Something that was centrally balanced and not prone to falling over. 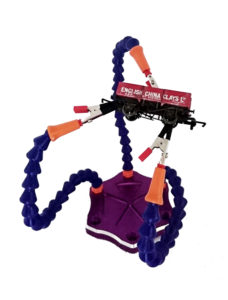 Well luckily, they have and I’ve been playing with it.

With six articulated arms screwed, soft grip clamps and a weighted metal base the Crazepony Soldering Station promises to be an answer to all the frustrations of old-school Helping Hands.

The tool comes as a series of parts but assembly is obvious and minimal.

Six 12-inch arms screw into a heavy aluminium base and the clamps slot into recesses at the top of each arm. (There are actually seven arms supplied, I’m not sure why an extra arm is included but it’s good to have a spare, I guess).

A USB powered fan is also provided but this is optional and is held by one or two of the clamp if wanted, as can other tools (such as a magnifying glass) although these are not included.

The metal base is aluminium and weighty (providing stability, which I’ll come back to) while the arms are plastic and the clamps at the end are stainless steel but coated with rubber to protect delicate surfaces.

The colour and coating look cheep – see niggles at the end of this review – but feel strong and robust in use. I gave the arms a good twisting and pulling and they stayed intact and after some time using them I’ve had no reason to doubt them.

Flexibility is the primary selling point of this tool and as a means to hold models and trains for detailing, painting and weathering and electronic components and wiring for soldering it beats every other helping hands type tool I’ve used.

Six long, ball-jointed articulated arms can bend and twist to any position and angle. This allows the jaws to be placed where they’re needed and along multiple axis planes at the same time.

Need to hold an object at the ends, from underneath and from the rear at the same time? The six arms with jaws, that can rotate through 360 degrees, can bend around to do it. It’s great for securely holding pretty much any object.

It’s also really nice being able to reshape the arms as needed – without needing to undo nuts, change and then re-tighten.

The jaws of the alligator clamps are also rubberised.

If you’ve ever damaged a delicate plastic model, scratched paintwork of metal crocodile clips you’ll know the damage they do. And if you’ve ever trapped your fingers in them….

It’s a subtle difference between this and many of helping hands but makes a big difference when working with plastic models!

I’ve been using this for some time now and much prefer it over my ageing pair of Helping Hands. There are however a few niggles and scope for improvement.

The screw threads for the arms, that attach them to the base, are plastic and I suspect they may wear or break given time. Metal threads would be a lot better.

The crocodile clips also just push into their holders at the top of each arm. Again, in time, they might come loose.

Both of these issues can be easily solved with glue if needed but it would be nice if a more robust attachment mechanism were available.

The most annoying aspect, however, is the finish of the product.

It’s a well thought through product that’s a massive benefit for soldering and model making but what’s with the garish metallic pink base and cheap plastic finishing in blue and orange on the arms?!? This makes it look like a cheap toy*. This doesn’t detract from its usefulness but why on earth did they choose these colours? Mine will be painted ASAP!

This is a model making and soldering dream and my Helping Hand has been put into my ‘spares and repairs’ box for another use (more on this on another day). It’s now a firm fixture on my workbench along with my Antex soldering iron, Fancii head magnifier and Xato kife. Recommended.

Update: Other colours are available, (one with a black base and one with white arms) but the version I bought for this review came with the pink and blue.


Full disclosure: I spend days, weeks perhaps months testing modelling and model train products for the reviews on Model Railway Engineer and have used hundreds of tools, accessories and materials over many, many, years. No money or gifts were exchanged for this review. I bought the product at the normal advertised price and without the supplier knowing it would be reviewed here. The links on this page may take you to carefully selected businesses, such as Hornby, B&Q, Amazon or Scale Model Scenery, where you can purchase the product under affiliate programmes. This means I receive a small commission on any orders placed although the price you pay does not change. You can read my full affiliate policy here: