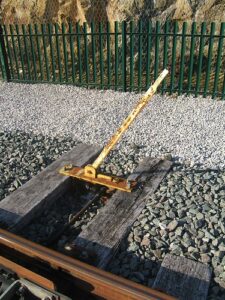 How steam-era railway signalling was controlled.

Following on from part one, this article from janfordsworld.blogspot.com explorers how Semaphore railway signalling was controlled, how point rodding worked and the key parts of the system for those wanting to model the wires and rods around their model signals.

Turnouts or ‘points’ on a railway may be locally operated (‘Hand points’) or remotely operated from a Ground Frame or a Lever Frame in a signal box, as illustrated in the pictures below. 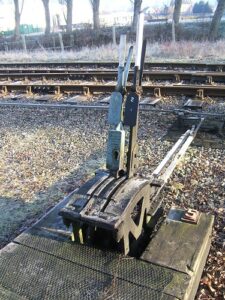 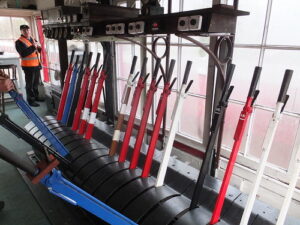 In the U.K., remote operation was initially achieved by transmitting a force mechanically and this method is still used today.

Overseas, a 2-wire system was developed using flexible steel cables but this is outside the scope of this article, as are the more modern methods of operation using electro-pneumatic, electro-hydraulic or electric motor techniques.

The signalman’s effort is transmitted mechanically via a system of point rodding made of steel tube or steel inverted ‘U’ channel. This rigid tubing or ‘U’ channel allowed both a ‘pull’ (to change the points) or a ‘push’ (to restore the points to the original position) to be transmitted. 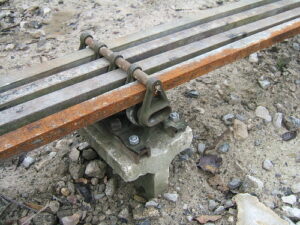 ‘U’ channel point rodding supported on an Anti-Friction Roller Frame, mounted on pre-cast concrete base.

Where changes of direction are required, Bell Cranks are installed. 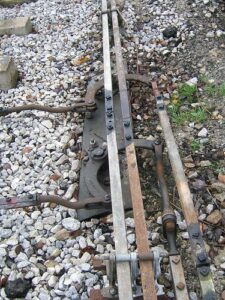 At the point where the rodding is attached to the switch rails of the points, an adjustable crank is usually provided, allowing the correct ‘throw’ to be set. 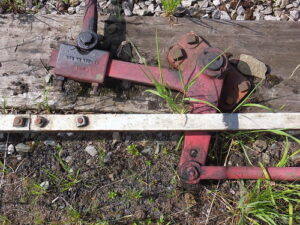 A ‘Compensator’ (‘Comp’) is placed at the centre of each run of point rodding, which reverses a ‘pull’ into a ‘push’ but prevents temperature changes from moving the point blades because the expansion in the two lengths of rodding cancel out. 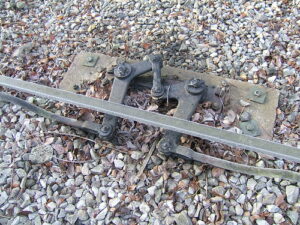 Facing turnouts are more dangerous because of the risk of derailing a train if the points are not ‘fitting-up’ accurately when a train passes over them. To ensure that switch rails are ‘fitting-up’, facing points on passenger lines are equipped with a Lock Stretcher joining the ‘toe’ of the two switch rails. The Lock Stretcher is provided with two notches so that the points may be bolted in the normal or reverse position by driving a rodding-operated Facing Point Lock (FPL) through the appropriate notch. The picture below shows a typical facing turnout on the Battlefield Line (this example constructed using ‘Bullhead’ rail). There are two runs of point rodding (of inverted ‘U’ section) connected back to the controlling signal box. One set of rodding actually operates the FPL. When the FPL is driven into a notch, the points are held firmly in position. The FPL must be drawn back clear of the notch by the rodding before the actual points can be moved using the other set of point rodding. 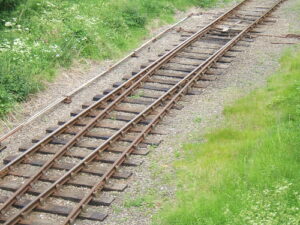 Facing Turnout at Market Bosworth on the Battlefield Line (currently ‘clipped out of use’).

The following picture shows the Facing Points on the Down line at Darley Dale (also constructed using ‘Bullhead’ rail). The Adjustable Crank in the foreground drives the Facing Point Lock into one of two notches in the Lock Stretcher of the points, according to whether the points are Normal or Reverse. This Adjustable Crank is operated from the signal box via the rodding run nearer the track. The rodding run away from the track drives the switch rails through a second Adjustable Crank (partly hidden behind the electrical detection box). 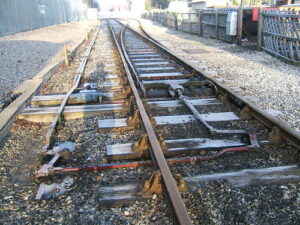 To make sure the stock (outer) rails don’t move, the slide chairs at the ‘toe’ fix through a metal soleplate, which has an insulator (right of the FPL) to avoid shorting electric track circuits, where provided. The switch rails are joined by an insulated Lock Stretcher, provided with two notches. The cover over the Facing Point lock has been removed in this picture to show how the ‘joggle’ in the FPL is used to drive the FPL detector rod left and right, indicating whether the FPL is engaged in a notch or not. 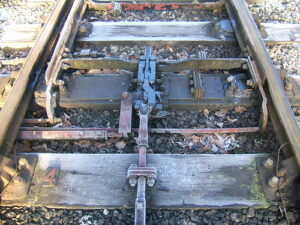 The picture below shows a pair of Signal Detectors (one for each route) fitted in the signal wires leading from the signal box to signals reading through the points. The metal detector blades connected to the adjacent points are notched so as to prevent a signal being cleared unless the correct closed switch rail is fitting up properly and (usually) that the points are ‘bolted’ by the FPL. 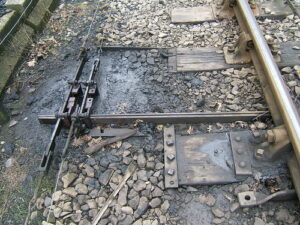 Signal Detectors at Shackerstone on the Battlefield Line.

A more modern alternative to providing Signal Detectors is to fit Electrical Detection (ED). This is an electrical contact box where a circuit is closed only when the correct closed switch rail is fitting up and the points are ‘bolted’ by the FPL. The picture above of a Facing Turnout at Darley Dale shows the moulded cover of the electric contact box. In the signal box, electric locks are provided on the signal levers so that the signal can only be cleared when the Electric Detection at the points confirms that the points are correctly set. 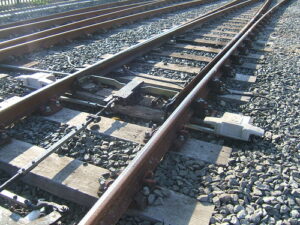 There is an informal design rule, sometimes called Murphy’s Law (or, in England Sod’s Law) which states that “If a thing can go wrong, it will go wrong”. It became clear that facing points required a safeguard to prevent attempted premature movement. This was provided by arranging a flat-topped Locking Bar just inside one rail on the approach to facing points, supported on a series of moveable short Rockers fixed to the web of the rail. The Rockers normally lay at about the “10 o’clock” or “2 o’clock” position so that the top of the Locking Bar was below the level of the wheel flanges. The rodding which pulled and pushed the FPL was also arranged to pull and push the Locking Bar, turning the Rockers so that, at the “12 o’clock” position, the whole locking bar was lifted up. With the FPL either in or out, the Rockers sat at about “10 o’clock” or”2 o’clock”, with the Locking Bar below the level of the wheel flanges.

If a train was standing or passing over the Locking Bar when the signalman attempted to withdraw the FPL, the Locking Bar would lift as the Rockers turned and the wheel flanges would interfere with the raising of the Locking Bar and prevent the FPL from being withdrawn. The Locking Bar had to be longer than the maximum distance between wheelsets on a train, otherwise there was a risk of the points being moved between one wheelset and the next. The longest bogie coach in use normally determined how long the locking bar needed to be. Having changed the points safely, the signalman could then operate the FPL to bolt them, at the same time lifting the locking bar until the rockers had passed the “12 o’clock’ position

This was an effective mechanical technique but it could be cumbersome to implement and maintain. It could also be tiring for the signalman. Years ago, I unofficially worked a number of signalboxes including Deepfields which had four facing points provided with Facing Point Locks and co-acting Locking Bars and even that was challenging. 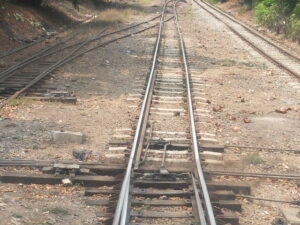 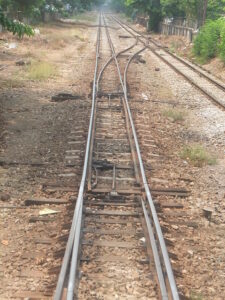