If you want your model railway to look the part, you’ll need signals and in the case of steam era railways this means semaphore signals. Here’s a back to basics guide on what and how semaphore signalling worked.

A couple of readers have contacted me recently to point out that I’ve neglected to cover signalling on Model Railway Engineer. On checking they were absolutely right. I can’t believe I’d missed this vital aspect of railways but missed it I had.

Let’s correct that omission straight away with an introductory guide to the operation of semaphore signalling.

The principals of UK railway signalling are complex and rather than get it wrong, Jan Ford has kindly given permission to reproduce this guide from janfordsworld. Over to Jan.

There are two principal classes of fixed signal:-

Signals comprise a vertical post (of wood, steel tube, steel lattice or occasionally reinforced concrete) on which is mounted one or more ‘stop’ or ‘distant’ signal arms each comprising a rectangular ‘blade’ (of wood or steel) mounted on a pivot so as to extend to the left of the signal post (viewed from an approaching train to which the signal applies) at a height to facilitate observation by the driver of an approaching train.

The two types of signal arm are:- 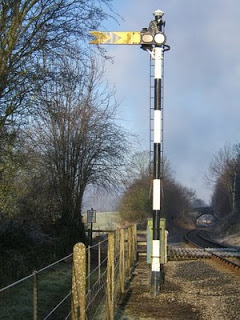 Darley Dale Down (fixed) Distant Signal. The black and white painting of the post indicates an ‘Independent’ Distant – one not co-located with a ‘Stop’ Signal.

Obviously, at night train crews wouldn’t have been able to see the arms as clearly so the signals were fitted with a lamp (usually paraffin). Two coloured filter glasses are connected to the signal arm and move in front of the lamp according to how the signal is set.

Both types of signal have two valid aspects, according to the position of the signal arm (which controls the colour of the lamp shown at night):- 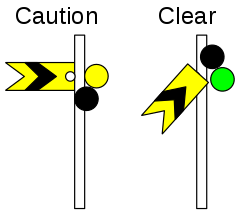 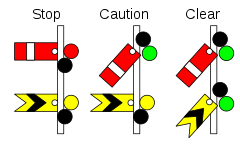 For special purposes (such as shunting), there are various types of ‘Subsidiary signal’.

These are ‘Stop’ signals but provided with smaller arms than ‘main’ signals and often mounted on the same ‘doll’ as a main signal. 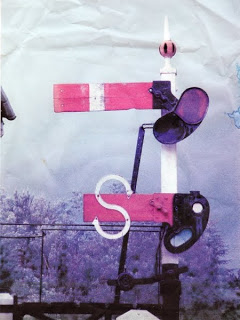 An elderly Great Western signal. The signal arms are wooden, as is the ‘doll’ (vertical post) mounting the arms. The lower arm is smaller and the ‘S’ indicates that it authorises a shunting movement past the signal.

‘Stop’ signals are often situated in advance of turnouts (points) where two (or more) routes diverge.

Railways in Britain provide ‘Route Signalling’ where, at diverging lines, there is a separate signal arm for each route. Originally, these arms were placed on a single post, one above the other, with the topmost arm referring to the leftmost route. Particularly where there were more than two routes, this was judged harder for an approaching driver to correctly interpret at speed so this arrangement persisted only on slower lines, such as Goods Lines.

On main lines, individual signal arms are placed on separate, secondary signal posts carried side-by-side on a bracket from a single main signal post. Where a large number of routes are to be signalled, a gantry (or ‘signal bridge’) carried by two or more posts or supports can be provided. On bracket signals or gantries, the secondary posts are called ‘dolls’. The leftmost ‘doll’ applies to leftmost route and so on.

‘Stepping’ relates to the relative height above ground of the arms.

The highest arm is the highest speed route and so on. Two routes with the same speed limit have the corresponding signal arms ‘stepped’ to the same height.

Note that no absolute speed is implied, requiring the driver to have a detailed route knowledge. [Foreign railways (unless under British influence) developed a system of Speed Signalling where the driver didn’t know what route he was to take, only a safe speed to run at. Different signal aspects implied different absolute permitted speeds. It can be argued that this means drivers do not need such detailed route knowledge]. 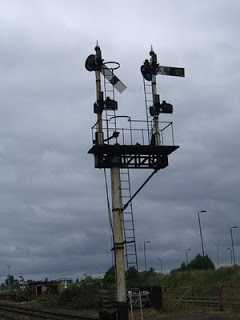 Lower quadrant Two-doll bracket ‘Stop’ signal at Tyseley viewed from the rear. This is a standard Western Region pattern. Each ‘doll’ (post) carries a main arm and a subsidiary (calling-on) arm and is topped with a ‘ball and spike’ finial.

Signals are provided to allow each signalman to control trains in his area.

On normal double track lines, ‘STOP’ signals implement the ‘Block System’. Each signalman became responsible for the line on which trains approach extending from the previous signalman to his own location. This was called the ‘Block Section’.

To give an approaching driver advance warning of the aspect showing on the ‘Home’ and ‘Starting’ signals at the next signal box, a ‘Distant’ signal is placed in the rear of the ‘Home’ signal at a distance which, if the ‘Distant’ is ‘On’, will allow the driver to bring his train to a stand at the ‘Home’ signal bearing in mind the maximum permitted speed, the prevailing gradient and the braking characteristics of trains using the route. This distance may be a mile or more. Interlocking of the levers in the signal box is arranged so that the ‘Distant’ signal can only be cleared to ‘Off’ if the levers for all the ‘Stop’ signals on the signalled route have been operated. 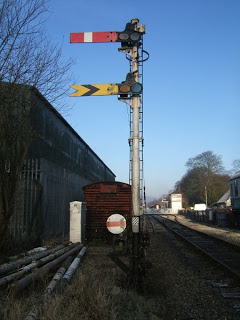 Darley Dale’s Down Home Signal – a tubular post upper quadrant signal with fixed distant for the next signal box (Church Lane) mounted below. Note the Ground Disc signal and Signal Post Telephone mounted at the bottom of the post.

It’s important that a driver will be able to see a signal at the earliest possible opportunity and great care is taken in the positioning of each signal. Signal posts may be short (where an overbridge before a signal limits the driver’s view), tall (where it is desired to ‘lift’ the arm above a visually confusing background) or cantilevered left or right to improve the driver’s ability to ‘sight’ the signal. 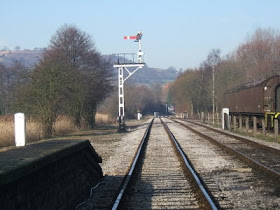 Church Lane Down Outer Home is a single doll mounted on a right-hand bracket. The ‘White Diamond’ sign mounted underneath the signal arm was introduced where track circuiting indicated the position of a train detained at the signal in the signal box, relieving the Fireman of the need to report to the signal box to carry out what was originally ‘Rule 55’.

Mechanical Operation of Signals by Wire 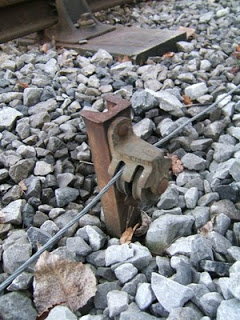 Single signal wire carried on a 2-way alloy signal pulley. The pulley is mounted on a vertical post driven into the ground (in this case a length of U-channel point rodding).

Where signal wires need to change direction (for instance, to cross to the other side of running lines), the change of direction is made on horizontal pulley wheels. A length of chain is interposed into the signal wire in the vicinity of the pulley to provide sufficient flexibility to accommodate 90-degree changes of direction. Depending upon the complexity of the layout, one or more pulley wheels may be fitted to a cast iron carrying frame which is fixed to a wood or concrete ‘bed’ set into the ground. These pulleys are normally referred to as ‘Chain Wheels’.

Single chain wheel providing around 90 degree change of direction to the signal wire. The frame of the chain wheel is bolted to a concrete ‘bed’.

> Article reproduced by kind permission of the author, Jan Ford. Words and pictures, (c) Jan Ford. The original article and further information can be read on Jan’s blog.