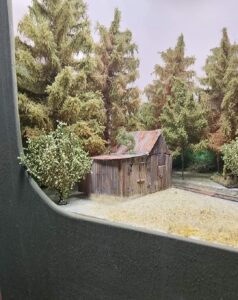 Making a scratch built barn to hide the fiddle yard entrance on the layout was a lot of fun.

The track on the layout emerges or disappears — depending on the direction of travel of the trains — on the left side to where it will connect to a fiddle yard.

Obviously having the tiny trains disappear through a hole in the back scene is a bit rubbish and I wanted to hide it with something.

>This post is part of a series on the construction of a lifelike model railway for exhibitions. To read other posts in the series covering its development, track work, scenery and model building making, see building an exhibition model railway.

In the original plan this was going to be hidden by the mill but I subsequently changed things around with the mill moving to the rear of the layout as explained here. This works well but results in the hole in the back scene where the track leaves the layout partially visible, some trees covering it but not enough.

After a bit of contemplation I decided another building was needed and went for a derelict scratch barn that pokes out from under the trees.

I couldn’t find a ready built model that really fitted the look I wanted so instead built it from scratch.

Building a model barn from scratch

Most of the buildings on my exhibition layout (such as the watermill and blacksmiths) are made from plasti-card and kits but for this I fancied doing it completely from scratch using raw materials.

First up was to draw up a few plans for old barns. I had a rough idea of the kind of thing I wanted and a quick Google image search for ‘old barn woods’ revealed some real barns that I used for further reference.

Unlike the plasti-card models, the outer skin of this model will be made from isn’t in one piece so something is needed to give it overall form and provide a base onto which the surface layers can be fixed to. For this I used thin cardboard, cut and glued together as per my initial sketches.

This base also allowed my to test positioning on the layout and see how it might look before getting too far.

The wooden planking was made from tree branches from local linden or lime trees (basswood in America).

Linden wood is stronger than balsa wood and also has a grain that looks right at this scale, 1/76th or OO.

After a bit of searching I found a a row linden tree growing near by and recovered a few fallen branches and twigs. The bark and moss was sliced off and the sticks left to dry out for a few days — removing the bark speeds up the drying process — before they were cut into appropriately sized planks using my trusty razor saw. (This has a blade thin enough to cut the sticks into 1mm thick planks). 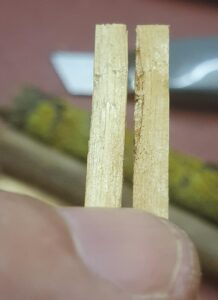 Making the planks for branches of linden wood.

These planks where then glued to the cardboard frame and with doors made in the same way.

I came across a disused barn while on holiday recently (see below) which had the dilapidated look I wanted and used this as a reference for the wood texture. 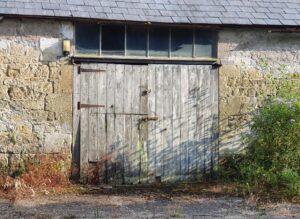 This is an old abandoned barn I used as a reference on which to based the wood texture and ramshackle look.

To achieve this look, the linden planks were scored with a wire brush and a heavily watered down black wash applied.

This soaked into the wood and bought out the scratches and wood grain. A few planks — notably those of the doors — were given further washes and dry brushed with browns to give the impression of different ages of wood being used. The bottom of the planks were scoured with a knife to give a rotted away look around the base , as per the reference photo above, and giving the result below. 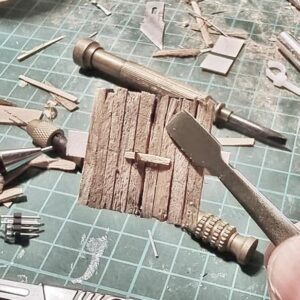 Close up showing detailing of the wooden planks. This shot shows the doors. The colouring is slightly darker than other wood to give the impression of different wood being used over the years. It’s also just possible to see the nail holes made at the bottom of the planks.

For the corrugated iron roof, I used some thick tin foil, off of a coffee tin, and then scored it every few milli-meters to create the undulations.

It took some experimentation to find an implement that gave a rounder undulation without cutting or tearing the fine foil. In the end I used a wooden cocktail stick with the end filled down to blunt it.

The tin foil was placed on a sheet of balsa wood that absorbed the pressure and gave created more pronounced undulation. Masking tape held it in place with the scoring made from the tape side outwards to stop the foil curling upwards as I worked across it. 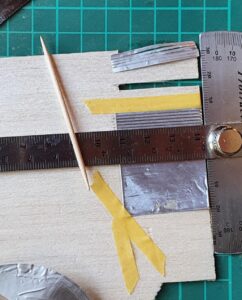 Using a blunt cocktail stick to make the undulations on tinfoil for the corrugated roof.

It was then primed grey and assorted blends of Model Mates rust effects and AK rust streaks and AK Streaking Grime finished off with a dusting of finely ground orange and red pastels from this set.

The flashing at the joints apex of the roof and where the two roof sections meet was made from strips of tin foil and painted the same way. 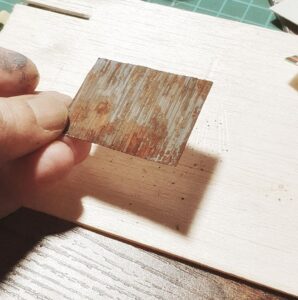 The foil was fixed to the card frame and wooden planks with this gel glue. The gel makes it easier to place and it sticks the foil to the wood easily. In a warm environment it also sets quickly although it be sure to follow the safety instructions. 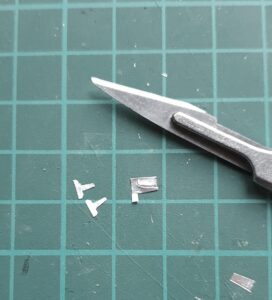 Cutting hinges for the door from tin-foil. These are then primed, painted dark grey and a touch of rust added.

For final detailing, handles were added to the doors — made from circuit board breakout connectors — stiff wire bent at 90° with a further bit of wood placed between them to create the cross bar.  Hinges were made from tin foil cut to shape and glued on. Finally, twin holes were made at the top and bottom each plank to simulate nail holes and a fine tip black pen was then pushed into each hole to darken the recess. 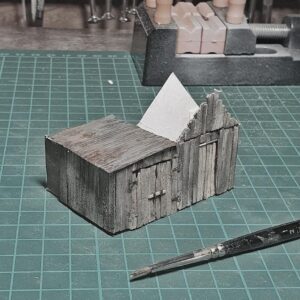 The barn under construction.

As a last touch, holes were cut in the roof and some of the tin foil bent over for vegetation to poke through.

The whole barn was then pushed into the tree line so the rear isn’t visible and it appears to have been built, abandoned and overtaken by the trees conveniently right in front of the baseboard exit portal 😃


> A final, personal, note: I spend a huge amount of time testing, photographing, writing and researching techniques for these articles and pay for all the running costs of MRE out of my own pocket. If you found this article useful you can support me by making a donation on my fund-raising page. Thanks and happy modelling, Andy.
Affiliate notice: Some links on this page will take you to carefully selected businesses, including Hornby, B&Q, Rapid Online, Amazon, eBay, Scale Model Scenery and Element Games, through which you can buy products mentioned. These links are made under their affiliate schemes which means that although the price to you doesn't change I get a small commission on the orders you place. Please see the disclaimer for more details.
Updated:Thursday, December 9, 2021