Most model railways are seen from above so roofs are one of the most important aspects but making realistic, credible, roofs is a skill that escapes many. Here’s a quick guide to making slate roofs from the model making guru behind the fabulous Bron Hebog 009 layout.

In preparation for my £35 model railway build project, I’m sourcing scratch building techniques — making models from scratch — as this is cheaper (and more rewarding) than buying off-the-shelf plastic kits.

I came across one technique recently that really appealed. It’s for slate roofs.

(If you’re wondering why I’m spending time on roofs consider, for a minute, how we view model railways. It’s typically from above so it’s the roofs that we see most. It really is worth spending time on getting your roofs right).

The technique here is used on the stunning Bron Hebog 009 layout and rather than reinventing the wheel I’ll let Rob Waller, who makes the stunning models on the layout, explain how he makes them.

Note: this is from the original post on making not just slate roofs but distressed roofs, where the slates have slipped but the technique is good for both.

This last week I’ve been working on the roof of the old barn – the end that still has one, that is.

The challenge with this has been to make it look suitably distressed.

On all the houses I’ve been building for the layout I’ve been able to use embossed plastic sheets but here the only realistic solution is bespoke slating. I use strips of very thin card – or perhaps, more accurately described as very thick paper – onto which I have run through a photocopier with a repeated design of rows of slates.

I cut out a row and then slice with the blade on the markings between each slate, leaving them connected by a sliver along the top edge, and then I glue them, row upon row, onto a styrene sheet using PVA. 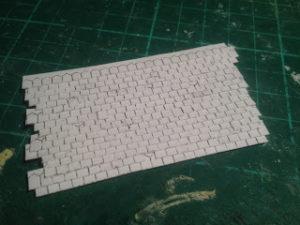 Doing it this way I can break the row at any point to create the look of a missing slate or one that has slipped.

In case you were wondering why there is the triangular marking at the top it’s because I first created the pattern when I was asked to make a model of Minffordd weigh house as a retirement gift for FR permanent way legend Fred Howes.


>A final, personal, note: I spend a huge amount of time testing, photographing, writing and researching techniques for these articles and pay for all the running costs of MRE out of my own pocket. If you found this article useful you can support me by making a donation on my fund-raising page. Thanks and happy modelling, Andy.
Updated:Thursday, December 15, 2022