Of Gin, Grime and Geoff Burch

I spent last night in a local pub drinking some absolutely delicious Tiger Gin. What’s that got to do with model railways you ask….

Well actually, what drew me to the pub wasn’t the Gin — unbelievable as that maybe — but a presentation being given by none other than Geoff Burch.

Geoff is a railway man of almost 50 years and has written several books recounting his memories of his time on and around locos in the 1960s. He also gives regular presentations talking about his experiences and last night was one such event and I wasn’t going to miss it.

Helpfully, it was in The Keep pub which is not to far from me (Geoff also lives in Guildford) so I popped along after work.

The presentation attracted a good sized crowd and everyone enjoyed it with Geoff regaling us with stories of his antics as boy train spotting, then getting a job as a engine cleaner before going onto become a fireman and engine driver.

His talks are an absolute must for anyone wanting to relive the days and details of steam — and especially those around Guildford where he was based — and are told with humour, passion and a depth of knowledge that only someone who was there can bring.

Highlights for me were his vivid descriptions of cooking breakfast on the footplate, cleaning the insides of the fireboxes and the relaxed approach to the health and safety risks of working on the railways (no Hi Vis jackets then) and around the equipment and tools that had been left all over the yards. A subject which takes takes me neatly to the takeaway of this talk for modellers.

To illustrate these points Geoff showed several photos of the yards and engine sheds — and which are reproduced in his book: The Ramblings of a Railwayman — and it was only on hearing Geoff’s vivid descriptions and seeing these photos I realised how dirty, dangerous and messy steam era railways were by comparison to modern railways. 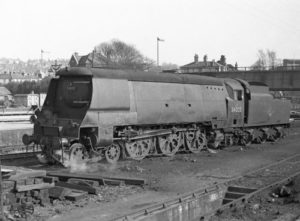 West Country Class 34023 at Guildford MPD but notice the debris around it. (c) Geoff Burch, from the Dave Salmon – G Burch Collection.

Like many modellers today, I grew up just too late for the steam era (they’re a foggy memory from my earliest childhood). By contrast the electric railways of my youth and those of today are much cleaner, tidier, affairs and our N, OO and HO gauge layouts reflect these and not the mess and grime of the steam era.

As a result, most modellers — myself included — have track and yards that feature a bit of coal around the coaling stages and the odd item of trackside debris but otherwise our railways are the well organised, clean and tidy as we see railways today.

Looking at the photos Geoff was showing however the reality of steam era was an eye opener!

There was far more coal, ash and clinker lying around that I’d have believed. There were piles of the stuff everywhere!

And it wasn’t just coal & ash that could be seen lying around.

Tools, buckets, ladders and railway equipment and more could be seen scattered all over the place. He really wasn’t kidding when joking about health and safety. Tripping and falling over things must have been a regular occurrence!

Looking at our miniature railways this is an aspect that’s rarely captured.

The tip of this takeaway then is that for realistic model railways dump coal and ash piles all over the place; scatter appropriate scale tools and equipment around the sheds, between tracks and do the same with railway debris (sleepers and the like).

Even if you don’t have a full model layout and just have the track on a table or worktop somewhere with a few buildings, adding track side buildings, water towers and the like will all help.

Another tip is that if you’re ever in Guildford, nip along to The Keep and try the Gin! You’ll probably find me there too 🙂

Details of where Geoff is presenting next and his books can be found on his website at ramblingrailwayman.co.uk. The above photo is (c) Geoff Burch, from the Dave Salmon – G Burch Collection. Picture of The Keep, (c) Ben Darnton, Both reproduced with kind permission.