Home » Model Railways » Electrics » What’s the difference between DCC and DC trains – which is best?

What’s the difference between DCC and DC trains – which is best? 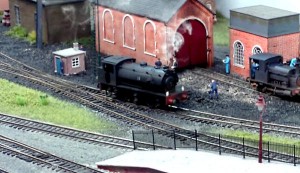 When first starting out you’ll undoubtedly come across two terms — DC and DCC. What does DCC mean, what are the differences? Which should you get?

Firstly, the two terms describe how electricity is supplied to the trains on a model railway and how the trains are controlled.

On DC railways — meaning Direct Current — you are sending power to the track and all trains on the track get the same power. It has the advantage that it is easier and cheaper than DCC which I’ll get to in a minute.

The disadvantage is that, as said, the electrical supply goes to the track and all engines on work in the same way: all trains on the same track go in the same direction and start and stop at the same time.

Equally, if you change the power level all the trains slow down and speed up. There’s no independence between trains unless you have different sections of track with their own DC supply.

DCC — meaning Digital Command and Control — is more sophisticated with everything that entails.

On DCC, each train is controlled independently. You can have one train reversing, another going forward at full speed and another slowing down.

Additionally, DCC trains can have extra electronics in them enabling special effects such as lighting, sound and even fake steam and smoke – and all controlled independently.

The disadvantage is that DCC is arguably harder to operate and the trains and accessories cost a lot more than DC as they have digital electronics inside them.

There’s no right or wrong answer to this question.

If you want simplicity or cost is a factor, DC trains are arguably the better option. If however you can afford more and want all the bells and whistles on your trains – literally – DCC is probably a better choice.

Personally, although I like the idea of having miniature steam trains billowing smoke for which DCC would be a better option I prefer to spend my time on the model building aspects of the hobby and don’t want to spend time or cost on the electrics so opt for DC — or analogue as its also called — most of the time.

If you’re buying a train or a train set and already have DC or DCC check the trains will work with your existing equipment as there can be problems between some controllers.

Lastly, on the subject of smoke, I’ll leave you with this video showing DCC driven steam engines with smoke and sound. Just beautiful.

Along with digital or analogue control, the other most common question I get asked is which gauge to go for. Read my guide on the gauge question if you’ve yet to make your mind up, or if you’ve already decided and just want to order your train set see the companion article to this post where followers of Model Railway Engineer give their picks on the top four DC and DCC best train sets.

So in closing, the meaning and differences between DC and DCC are:

For deals on DCC controllers, take a look here for Amazon offers.


> A final, personal, note: I spend a huge amount of time testing, photographing, writing and researching techniques for these articles and pay for all the running costs of MRE out of my own pocket. If you found this article useful you can support me by making a donation on my fund-raising page. Thanks and happy modelling, Andy.
Affiliate notice: Some links on this page will take you to carefully selected businesses, including Hornby, B&Q, Rapid Online, Amazon, eBay, Scale Model Scenery and Element Games, through which you can buy products mentioned. These links are made under their affiliate schemes which means that although the price to you doesn't change I get a small commission on the orders you place. Please see the disclaimer for more details.
Updated:Sunday, January 2, 2022