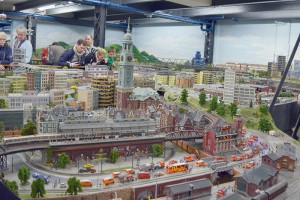 Most modellers have heard of Miniatur Wunderland in Germany, a world of model train records and superlatives. I was lucky enough to visit this paradise for model railway enthusiasts and I’m still picking my jaw up from the ground.

It’s not big but it is clever. Miniatur Wunderland.

The exhibition is housed in a unassuming warehouse complex in former docks roughly 25 minutes walk from Hamburg main rail station. On entering you make your way to the second floor where you either queue or pick up pre-reserved tickets (highly recommended if you want to avoid the wait of up to 2 hours) and then make your way to the first of 8 layouts spanning 100 to 300 metres each. 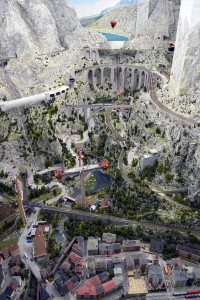 The size of Miniatur Wunderland is difficult to comprehend.

Although 100 square meters (with a total model floor space of 2,300 m²) doesn’t sound much it’s only on seeing them that you realise just how huge Miniatur Wunderland is and how much fun visiting is going to be.

It’s not just the physical space but the scope of the models. The mountains in the Switzerland section span two floors in height, the sea in the Scandinavia region features 30,000 litres of real water with ships making their way around while the entire layout features 221,000 HO scale trees! Yep, 221,000 trees! The scale of the model making is mind boggling!

Then of course there’s the model trains that run around the layouts. The element I, as a model railway builder, was most interested in and I wasn’t disappointed.

Approximately 1,000 locos continually run around the 13,000 metres of track under computer and operator control with points, stations, yards and junctions all operating seamlessly. Every type of train, wagon and carriage is present but naturally accurate for the country they’re in, whether it’s steam or intercity express (ICE) trains they’re here. I can only imagine the amount of track, wiring and planning that must have gone on to achieve this.

Adding to this are tens of thousands of cars, 44 planes and 13 ships that operate either manually or automatically around and alongside the trains. The team at Wunderland say that the cars all operate independently and in the American region can even have traffic jams and road blocks which the cars automatically work around! The planes that take off and land at the €3,5million airport have been reported on many times – what’s not reported so often is a sea on which ships move around, navigating via a fully operational miniature GPS system.

Let There Be Lights!

Then there’s the lights. Good grief! It seems like every scene, building, train, plane, car and ship has working lights and effects and that doesn’t do it justice. The lights don’t just switch on and off, but operate in perfect harmony with each other and vehicles around them, either reacting to or directing everything that moves. 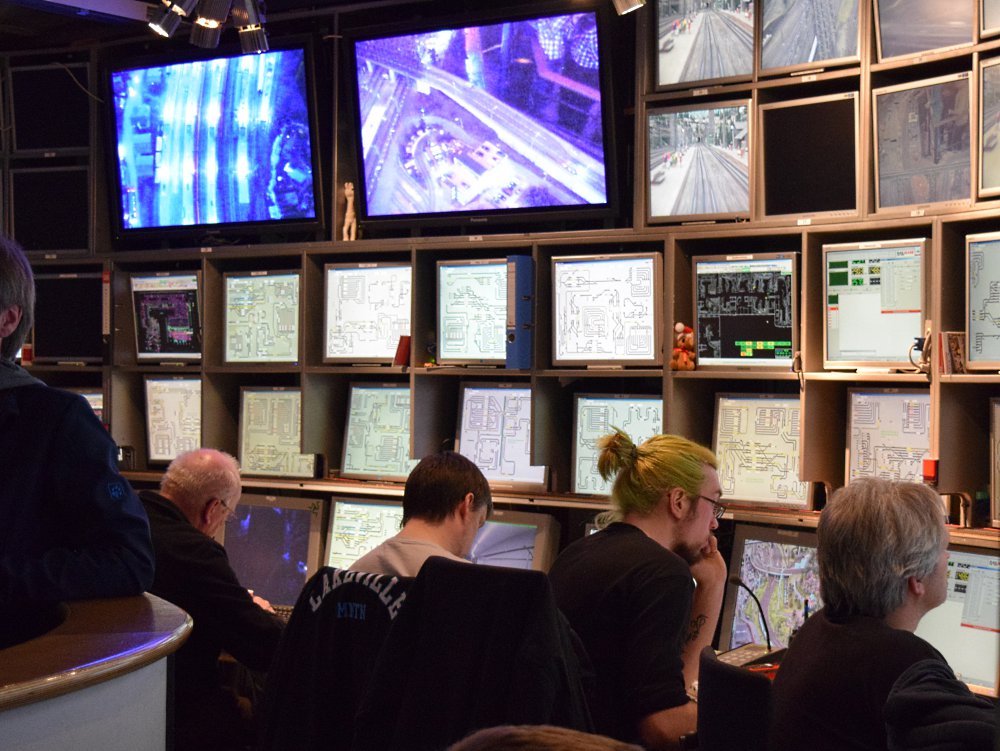 The fun these guys must have.

As a former computer server engineer I can appreciate the complexity of the programming and computing power that it takes to do this and all the operators to maintain control of model paradise.

The book talks about the server power to manage the layout and operations but surely understates the complexity and technical challenges of the software in question – which they’ve developed – to run everything without apparent glitches or faults.

What makes really Miniatur Wunderland stand out in the mind of most visitors however is the story telling that goes on in practically every square foot. With 215,000 tiny figures engaged in every aspect of human life, it’s all there, from comedy to tragedy, from mundane to out of this world (there’s an wonderful Area 51 / Stargate scene, implemented of course in perfect detail). 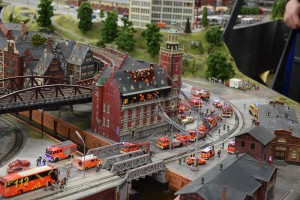 Fire! A fire breaks out with fire engines rushing to tackle it.

Attracting most attention is the fire that breaks out and the fire engines that rush to tackle it. Naturally, attention to detail is amazing, with imitation flames burning the building and simulated water being sprayed onto it.

Similar detail can be seen in the Hamburg zone, where a model of the Miniatur Wunderland building is shown. If you look carefully through the windows it even has a tiny model train running inside it. Astonishing.

I went around the exhibition twice and saw only a fraction of the glorious miniature life stories that are played out.

What’s most impressive however is that the 200+ staff behind the miniature world aren’t resting on their laurels. Their continually working to improve, extend and expand their creation.

Do yourself a favour, get the most from your visit to Miniatur Wunderland with these handy tips.

Rome / Italy is the next section that will open and was well underway when I visited. An England realm is also planned. I can’t wait to go back and see these new sections.

Model Railway Engineer note: Click on any of the pictures above for a bigger version.