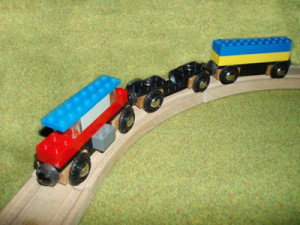 How to combine two childhood favourite toys to make one awesome train. All the fun of classic wooden trains with all the imagination and creativity of Lego.

While I spend most of my time tinkering with my model railways there’s something wonderfully simple about wooden trains and in moments of weakness I’m still prone to Brio buying spree’s on eBay and Amazon (don’t tell my wife how much I spend!). Combined with the track I had for my boys and I’ve got more than I should*.

At the same time however, I’m also a builder and engineer by nature and love constructing things in Lego. There’s something endlessly entertaining about taking a pile of Lego bricks and seeing what emerges.

And then it happened.

During an afternoon out with a friend, we got onto discussing hobbies. I mentioned Lego and wooden trains and he idly asked if I’d ever combined them? D’Oh! What a marvellous idea.

Mixing these two toy titans and being able to create my own Lego trains that run on those lovely wooden tracks was a free ticket to toy train utopia that I wasn’t going to pass up. So after a bit of experimentation and reading the wonderful Instructables website – that has a guide on this very subject – I got the two toy sets working together, here’s how.

How To Make Lego Wooden Trains

Rather than just sticking Lego bricks to the outside of an existing train – where’s the fun in that? – I wanted the ability to create Lego trains of any size or shape. The challenge therefore was how to fix a Lego base (on which further Lego could be added) to the chassis of a train that would run on the wooden tracks I had.

I had loads of wooden trains. It should just be a matter of breaking up one of these and sticking the Lego on right?

It wasn’t that simple however.

After experimentation that left me feeling like the evil toy destroying kid next door in Toy Story it became apparent that only certain wagons and engines had chassis’s suitable for the task.  The eventual criteria being:

The Bigjigs Rail Name engine unit meets these requirements and better still it’s available on eBay just £2.50 including postage! (As regular readers know, anything that doesn’t cost a lot gets my vote).

Attaching the Lego base plate to this is just a matter of prising the upper bodywork- the Blue and Yellow parts in the engine above – off the chassis (the Red section) and then attaching a 2×6 flat Lego piece.

As described, in the Instructables article linked below, this could be fastened in place using screws but I found the thin Lego plate sometimes broke while making the hole for the screw. Superglue was much easier and easily strong enough.

And that’s it really. 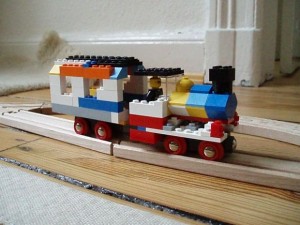 The Lego Brio wooden train is ready and it’s time to unleash the creativity and build away.

Whether it’s a steam replica, as in this picture, or something entirely different the choice is entirely yours.

PPS: I’ve used Brio and Bigjigs for my examples but this technique will work on any wooden train set as do all the my how to guides and tips for Brio trains sets.