Home » Blog » If Game of Thrones Had Trains

If Game of Thrones Had Trains

In case you haven’t noticed by now, I like railways. Just a bit.

I also like George RR Martin’s Game of Thrones. Isn’t series 7 shaping up to be the best yet?

So what could be better than mixing the two up?

This is precisely what designer Michael Tyznik has done with his incredibly detailed maps of an imaginary railway network across the across the continents of Westeros and Essos as set in the books A Song of Fire and Ice and Game of Thrones and the award winning HBO TV series. 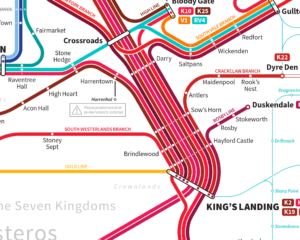 You can now plot journey’s around the kingdoms and imagine what it would be like to ride a train from King’s Landing to Casterly Rock or The Eyrie or work out the connections to journey from Castle Black to Widows Watch (take the Kings Line to Winterfell, change to North East Line to White Harbour and then transfer to the ferry – also mapped).

The maps are a glorious piece of cartography and design into which Michael has also incorporated many events and details from the epic fantasy. Stations of destroyed and abandoned castles shown as closed for example.

The maps are available as posters and available to order, links on Michael’s website.