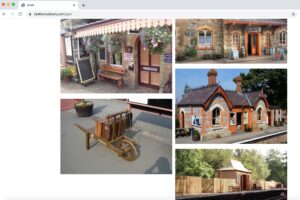 A goldmine for station modellers.

I’ve been on the Internet since it’s earliest days, even before browsers and websites came along, and I spend way too much time on it. As a result. I like to think I know the majority of model train related sites and resources.

But every so often I come across something new.

And this is one of those occasions.

My 009 layout is based on Pentewan in Cornwall and a narrow gauge line that ran from there to St Austell.

Without an actual station to use for colouring I went in search for other nearby station and buildings.

And this is when my Internet searches turned up StationColours.com.

It’s the work of Peter Smith and with guides for LMS, Southern, LNER, GWR, and many others, including several original official painting guides it’s veritable gold mine for anyone making model stations and wanting their stations to look as close to the prototype as possible.

In the case of GWR, the guides even includes the colours used for signs, barrows and interior walls.

With this information I can now paint my station and detailing with the Railmatch and Precision paints given and so be as close to lifelike had Sir Christopher Hawkins —) who built the harbour and town —) and John Barraclough Fell —) who built the line —) had teamed up and built a station.

Take a look at the site, it’s a wonderful resource for railway modellers.