A day trip to Eastleigh 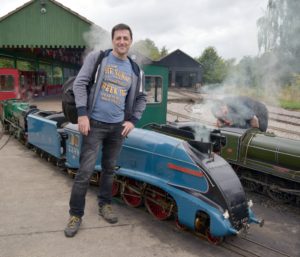 For my birthday my brother and his wife got me tickets for the miniature railway at Eastleigh. This weekend a Big Four show, with scaled down engines from the steam era, doing their stuff was on. A chance to see these & look around the once great Eastleigh works was too much to resist.

Eastleigh is a railway town in more than one sense.

Historically, it was home to one the largest and most important railway works in Southern England. Although it started life as a station on the way to London for London and South Western Railway Company (LSWR) in 1838, a wagon and carriage works was added in 1884, followed by a large motive power depot in 1903 and locomotive construction in 1901 becoming the principal works for Southern in 1923.

Nowadays its large sidings used for freight rolling storage and there are often diesels to be found alongside the hundreds of wagons waiting and there’s usually a shunter lurking around. 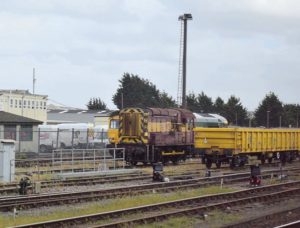 On my visit, there were around 10 class 66 diesel electric freight engines around today, including the 66707 Sir Sam Fray, and sure enough an EWS shunter was also lurking behind some freight wagons.

Along with taking in the rolling stock, it was fascinating to look around the works – sadly from behind the property boundary fences – and get some idea of size that the original works would have been. (Apparently, even now there is over a mile of track inside the works buildings).

But along with the full-size railway, Eastleigh also has a lovely miniature railway.

Eastleigh Lakeside Steam Railway is about a mile from the town centre and while as a circuit it’s not that big -1¼ miles – it has the benefit of a lovely collection of 19 fully operational miniature locos, 2 diesels and a battery powered Eurostar. 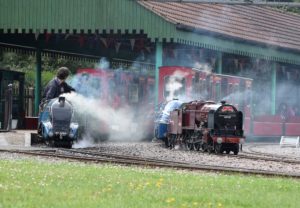 Today, being their Big 4 weekend, they were running impressively authentic miniatures of GWR, LMS, LNER and Southern engines. The highlight for me was the LNER Sir Nigel Gresley.

If you have young children, I can’t recommend Eastleigh Lakeside Railway enough!

I also had a quick look in the on-site shop and acquired a couple of new wooden trains — the Flying Scotsman and a GWR tank engine — by BigJigs.

The Kent company has to be commended for producing not just good looking wooden rolling stock but wooden versions of famous engines that will please not just children but train enthusiast parents and provide a great historical and educational talking point.

Lastly, Eastleigh is also home to one of my favourite model shops — AC Models — and I nipped in on the way through.

Along with the usual brand new Hornby, Dapol and Graham Farish OO and N gauge rolling stock and modelling materials they also stock second-hand trains and when visiting my brother I always drop in to see what bargains they’ve got going. On this occasion nothing took my fancy although I did pick up some point motor switches.

I hope to go back to Eastleigh in the near future and take more of a look around the works and perhaps go for another run on the mini trains at Lakeside although hopefully before my next birthday!