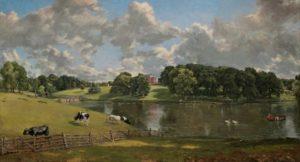 John Constable is one of England’s most famous and greatest painters. Here’s what we can learn from this master landscape artist to create your own beautiful model railway landscapes.

John Constable is ranked alongside Turner as one of the two greatest figures in the history of British landscape painting. His beautiful landscape paintings show an idyllic view of England during the industrial revolution.

Here are three techniques you can learn from him and improve your layout landscapes.

Before Constable, artists used their imagination to compose their pictures. Constable rebelled against this, capturing the landscape and skies he actually saw and his works are now recognised as meteorologically accurate records of genuine weather formations.

David Hockney has speculated that Constable achieved this accuracy through the use of camera obscura, where a lens or mirror is used to project an image on to a screen or paper which can swiftly be traced with a pencil or brush (Old Tricks, The Guardian).

Now I’m not suggesting you take a lens and mirror out to the countryside or your local heritage railway and trace landscapes and railway lines from which to build a layout.

But you can use photos of landscapes around the areas you’re modelling and reproduce the shapes, forms and features of the landscape in your creation.

Nature rarely gets it wrong when it comes to beauty and by mirroring her you won’t go far wrong either.

Work Out Your Layout Composition First

While Constable painted what he saw to ensure his paintings captured the natural beauty of Southern England, he was careful about the composition of his works. He chose the viewing angle carefully and created preliminary full-size sketches in oil paint to try out composition and ideas before starting on the final piece (Tate.org) 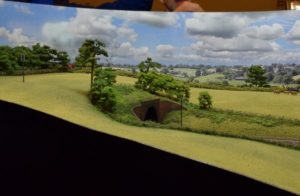 Building on this, artistic encyclopedia, Artble said: “In most of his work Constable used symmetrical compositions or scenes that focused on either a manmade building such as a mill, church or cottage, or a body of water, such as lakes or the River Stour.”

In a similar way, sketch out key areas in your layout from different angles to explore ideas and see how they look. Where do man-made objects fit into the scene, what colours work best, how can buildings be placed to create symmetry and balance with landscape features?

Use the back scene to set scale, tone and focus of your layout

Constable keenly understood the significance of the sky in setting the scale and sentiment of the picture he was painting.

In particular, he placed significant importance on the “lighting of a landscape and the consistency that must be achieved with the sky”, said John E Thornes  in John Constable’s Skies: A Fusion of Art and Science

He also used colours and shapes of clouds to impart meaning and set the tone. In an analysis of one of his most famous works, Salisbury Cathedral from the Meadows 1831, the National Museum of Wales notes how the storm clouds over the Cathedral and lightning striking the roof reflects the uncertainty of the future of the Anglican Church at the time. 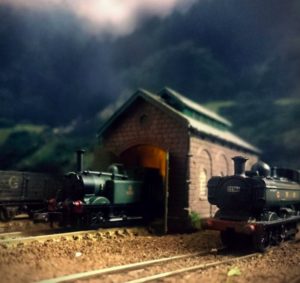 For us, the skies are the back scene and learning from Constable, we shouldn’t just plonk any cloud back scene on a layout.

Instead, decide the look and sentiment you want your model railway to impart and use cloud and sky imagery to reinforce this. I’ve touched on this before in 3 model railway building tricks you can learn from Blade Runner.

To create the feeling of a large pastoral landscape use open skies or within the distance. Conversely, for busy confined settings, such as a town or industry, bring the clouds in low and close with darker colours.

The photo of one of my N gauge layouts, just above, shows this in practice. Dark clouds are used to reflect and enforce the heavy industrial theme I wanted for the engine sheds and dock loading bay of this end of the layout.

Different cloud formations and even rainbows can also be used to exaggerate and reinforce features in your landscapes.

A rainbow ending above a particular building you want to draw attention to for example – as he did in where the rainbow fell on Leadenhall. This building was the home of his close friend Archdeacon John Fisher who had provided comfort and support to Constable following the death of his wife.

Is there a building on your layout you want to make standout and could do so with a rainbow?


>A final, personal, note: I spend a huge amount of time testing, photographing, writing and researching techniques for these articles and pay for all the running costs of MRE out of my own pocket. If you found this article useful you can support me by making a donation on my fund-raising page. Thanks and happy modelling, Andy.
Updated:Thursday, December 15, 2022