3 Model Railway Building Tricks You Can Learn From Blade Runner 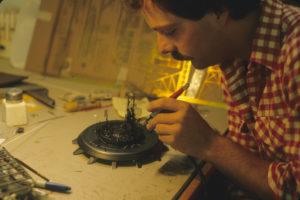 Three tricks used by the master model makers behind Blade Runner that you can use to improve your model railway.

Blade Runner 2049 is out and it’s amazing with stunning visuals. Is it as good as the 1982 Ridley Scott masterpiece? Only time will tell but, regardless of how the sequel is thought of, the original set the standard for sci-fi visual effects and even today railway modellers can learn from it.

Here are three model-making tricks chief model maker Mark Stetson and his team used in the dystopian epic that we can employ on our model railways.

Check out the opening sequence of the original below, skip to 54 seconds in.

Even more so considering the sequence of a futuristic Los Angles wasn’t computer generated but created from models!

Yep, it may look like this a huge cityscape but it was actually just a 15ft x 8ft table made with model buildings.

The trick the model makers used was to employ forced perspective to make it look larger. (There’s a fascinating insight into how the opening sequence was created over on www.geek.com).

And the same trick can be used on our model railway layouts to make them look larger too.

By using full-scale models towards the front of the layout and shrinking those as further away – towards the rear – the impression of distance is created. This is done to marvellous effect on the Copenhagen Fields layout by the Model Railway Club which uses a diminishing scale from the front to the rear.

Adding atmospheric effects, such as haze, also aids the impact of this technique.

Perhaps the best way of achieving both these effects on a layout is with a black scene, where the scale of the objects in the back scene is smaller than those on the layout and the distant scenery is toned down so it appears grey.

#2 Use Fibre Optics For Cheaper Lighting and In More Places Another trick we can learn from Blade Runner is lighting.

Lighting in model railways is usually achieved via LED or grain of wheat lights.

And although these are tiny when compared to normal bulbs they’re still large for many uses on model railways and the models in Blade Runner such as the pyramid-like headquartered of the Tyrell corporation (seen here).

This is technology that is still rarely used in model railways but should be used more.

Fibre optics not only allow areas otherwise too small for even standard lights to be illuminated but also allows lighting to be added for a lot less. A single LED can be the source to drive multiple lighting effects around a layout as seen in the video below.

One of the reasons Blade Runner was a classic is its striking visual design. The look and aesthetic is just as important to telling the story as the script and acting. And in the case of Blade Runner, the visual design team spent 9 months in preproduction thinking about and designing the look to get it right, with stunning results.

The same should apply to model railways. Think about the overall aesthetic and look of the layout from the very start and keep to it in every aspect. 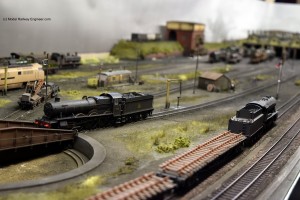 Examples of this can be seen in many of best layouts and one of my favourites for doing this is Kensal Green (seen here, click on the image to see it in greater detail).

This was originally built by Steve Knight in 2000, and retired in 2007, but is once again on the exhibition circuit.

The layout is set around a steam MPD (Motive Power Department) which would, by its very nature, have been dirty gloomy and the atmosphere of this is reflected all the way through the layout, even in the backdrop.

Doing this transforms a layout and makes it far more realistic – which is exactly why Blade Runner made such an impression, the visual effects team created a vision of the future that felt compelling, real and all absorbing.

Think about how you could use one of these techniques on your layout and share your idea in a comment below.

Photos of Blade Runner models via Minicity on Imgur.