Home » Projects » Can it really be done? Project Update

Can it really be done? Project Update

It seemed like a good idea… But then reality came knocking.

After my initial burst of hope, expectation and optimism surrounding the £35 model railway challenge set last month reality to set in.

If you haven’t read it already, read my first post on the £35 model railway challenge. The goal is to build a fully operational railway for just £35 — including all the track, trains, electrics.

But the initial wave of confidence collapsed as soon as I started to price up the various parts of the build.

Breaking down the various elements of a model railway along with estimates of how much I could afford produced the following daunting set of figures.

I knew it was going to be a challenge but ouch.

Just £15 for track, locomotive and rolling stock??? And £10 for the controller and wires?

Had I set myself an impossible mission?

I began to wonder. That £100 charity donation looked likely.

A tight budget is enlightening

But when I set to planning it was actually enlightening.

When you have a hard budget a lot of decisions are made for you. There simply isn’t the luxury for tons of track on a large layout with lavish landscapes.

This layout will have to be small, fun and simple.

No choice but OO

Take the £15 limit on track and trains for example. The forces the decision re gauge.

The huge amount of second-hand (ie cheap) Triang and Hornby OO gauge track and rolling stock available makes this a no-brainer. I thought about N gauge and even HO but they’re just too expensive.

Choosing OO gauge also has the advantage that it’s arguably the easiest and most common and so beginners reading this can join in with their own versions of this project.

And on a micro layout

And with just £5 for the track, the plan is going to be small which also makes the design easier.

£5 for the track, even second hand, isn’t going to allow that.

None of the layouts in my usual track planning resources will be possible.

No. If I’m going to stay within my budget the construction is going to be tiny.

With this in mind, I turned to the wonderful source of small layouts that is Carl Arendt’s www.carendt.com website. Here are dozens of tiny track plans.

I must have spent days looking that the pictures and plans there, thinking, dreaming and contemplating.

In the end, however, I went for a variant of one of the classics Carl’s Imports.

This is a simple industrial shunting theme with a single line feeding a siding and a shed with a second line operating in the background. 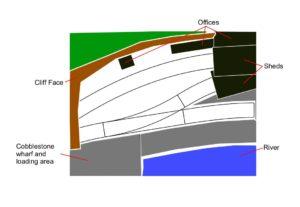 My version, above, retains the wharf, complete with cranes, at the front but also features an exposed cliff face at the rear.

This cliff face will also curve around to the left with the two lines disappearing into tunnels and so be disguising their otherwise early demise at the layout edge.

Although simple, this track plan also has a number of advantages for my project.

There are still some major challenges ahead.

Notably, the parts and construction of the framework and baseboard on which it can be built and getting the track and electrics. Can the electrics and trains and rolling stock be purchased spending no more than £15?

The main aspect of the plan above is obviously the points but either side of this are straights and curved track. I’m hoping I can find a job lot of track that will provide the necessary bits for a fiver at a boot fair or on eBay. Failing this, a single strip of flexi-track and the point might be possible.

If you’re dreaming of building a model railway, why not join me and have a go at building this layout yourself. The track plan above is a great place to start.