What Isambard Kingdom Brunel could teach us about model railways 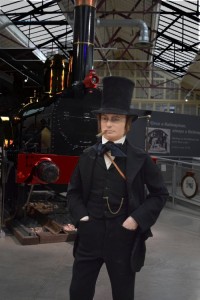 Looking for advice on how to build a model railway? Who better than Isambard Kingdom Brunel, the greatest ever engineer and patron saint of Model Railway Engineer.

Over the course of his 53 years, IKB revolutionised public transport, constructed an entire railway network and built an observatory, pier and dock systems and ships and reshaped the English countryside along the way.

He also devised a new signalling system, dug the Box Tunnel — which in 1840 was the longest tunnel ever built — and constructed 130 bridges and numerous viaducts, embankments, excavated the deepest cutting of its time (at Sonning) and pretty much created the railway town of Swindon.

Who better to learn from when building model railways.

Although Brunel had to solve lots and lots small problems when building his viaducts, bridges and railways he was also a Big Thinker.

He didn’t just build a collection of unconnected and individual of railways lines and the buildings around them. No, the prolific engineer had grand vision.

Thinking on a huge scale, Brunel wanted to link not just towns and cities of England but London and New York. GWR was just a part of his vision and was later joined by three steam ships of his design to reach across the Atlantic.

When building your model railway, follow Brunel’s lead and think big too.

I’m not talking about creating large room spanning layouts – although Brunel would have undoubtedly approved – but rather consider the macro picture of your layout.

Learn More About Brunel
If you’re interested in learning more about IKB and his engineering, I can strongly recommend Brunel: The Man Who Built the World by Steven Brindle and Dan Cruickshank.

It’s packed full of insight into the man and his projects and a gripping read too.

At the time of writing, it’s available from Amazon in paperback, hard back and Kindle formats.

Don’t just lay track and then build things randomly around it.

Instead create a Brunel-esque vision of the landscape or the setting your track sits in and work out every aspect of it. Should the railway go through, under or around hills for example. Doing so will give your railway a unified feel rather than looking like a collection of disjointed structures.

Thinking big was part of Brunel’s genius and why his railways and buildings have stood the test of time make it part of yours too.

If Brunel was building a model railway today it’s unlikely he’d buy plastic kits for the buildings or even the rolling stock. Rather he’d design and build things himself, from scratch.

His choice of broad gauge track for GWR instead of standard gauge used elsewhere being just one example of this DIY spirit and skill.

Do the same with your railway. It maybe more work to make things but it’s a lot more rewarding in the long run and you’ll learn a lot along the way. He’d be sure to approve!

Another trait Brunel was famed for and which modellers can learn from was his attention to detail.

Inherited from his father, Marc Brunel, he got involved in almost every aspect of his projects. On the Great Western Railway, for example, he personally surveyed the route, wrote specifications for the engines, designed the tiniest decorative details on buildings and picked the colour for the livery of his trains.

Model railway builders who follow his lead will have railways to be admired.

Think about every aspect of your models, no element should be too small or left untouched. From decorating the insides of buildings visible through windows to colouring trees and plants to match the growth in the season you’re modelling to the texture of the scatter to reflect the soil that would be present.

Tiny details all mount up which Brunel knew all too well, and this applies equally to railways and models.

Even the smallest misaligned rail will come back to haunt you later, buildings not bedded in will scream fake. Don’t skimp on the detail.

Start with the principal points of your layout and review every aspect, what small detail could you make better?

Brunel rarely admitted defeat even in the face of monumental challenges.

Take this lesson from him and use mistakes as a learning opportunity. You’re bound to encounter problems and set backs when making your railway, keep trying. (I’ve made just about every mistake in model making that can be made)

And when faced with a problem, read every model making and railway blog (hint, hint), book and magazine you can. Try different things. Experiment. Start again.

Just don’t give up!

If he’d accepted defeat England, and arguably the industrialised world, would be a different place than it us today!

Lastly, Brunel was a natural publicist and never missed an opportunity to promote his railways; so take a hint from the master, let others see your railway and share photos and videos of your layout with the MRE community.


> A final, personal, note: I spend a huge amount of time testing, photographing, writing and researching techniques for these articles and pay for all the running costs of MRE out of my own pocket. If you found this article useful you can support me by making a donation on my fund-raising page. Thanks and happy modelling, Andy.
Affiliate notice: Some links on this page will take you to carefully selected businesses, including Hornby, B&Q, Rapid Online, Amazon, eBay, Scale Model Scenery and Element Games, through which you can buy products mentioned. These links are made under their affiliate schemes which means that although the price to you doesn't change I get a small commission on the orders you place. Please see the disclaimer for more details.