Along with gauge, track codes are one of the most misunderstood concepts for beginners in model railways. Andy Carter from Calling All Stations decodes the codes.

Note: This applies to OO gauge model railway track. A note on N gauge is at the bottom of this article.

OO Gauge suffers from a historical anomaly that means its rolling stock is actually too big for the track it runs on. In the early 20th-century British model manufacturers had decided to compete with their American counterparts who had just launched HO gauge. (Half of O Gauge, 3.5mm to the foot scale or 1:87).

However, to keep costs down they were still manufacturing models with wind-up mechanisms.

This method of propulsion was proving hard to fit into 1:87 scale models.

The solution was to enlarge the models to 1:76 scale (or 4mm to the foot). Instead of enlarging the track with it – a costly exercise, the British manufacturers simply continued to import the American HO track and built the models’ axle width to cope accordingly.

At the time, when manufacturing techniques were cruder than they are today, this inaccuracy was not so noticeable.

Unfortunately, the mismatch in scale sizes stuck and is still in use by all the major companies (Hornby, Bachmann, Dapol, Heljan etc) today. The inaccuracy may still be hard to spot with the majority of models, but put a British OO Gauge model next to an American or European HO counterpart on the same track and the difference will certainly be noticeable.

So what can be done?

Some modellers do what the British manufacturers never did and properly enlarge the HO track to its true 1:76 scale. This is known as EM Gauge (and an even more accurate scale is P4), although you might often hear it referred to as ‘Fine Scale.’

This is a rather drastic step and almost exclusively requires the scratch built track to be constructed by the modeller in question. It also requires all the wheelbases and axle widths to be altered on the models themselves to cope with the enlarged track. The results are certainly remarkable, but this is usually beyond the Novice modeller such as myself.

An alternative is to look at improving the rail dimensions without altering the actual gauge.

You may have heard people talking about Track Codes – these are alternative varieties of off-the-shelf HO/OO Track with different rail heights.

The gauge is exactly the same, but the rail height varies in an attempt to be more accurate.

The ‘100’ simply means that the rail is 0.1 inches high. If this were to be scaled up alongside OO Gauge rolling stock, the rail height would be almost 30% higher than its real-life equivalent.

If you scaled this up it would this time be 3% lower than the real thing. It’s still not perfect, but it’s much closer to the mark than Set Track.

Codes 100 and 75 are the most common but there are other varieties:

The track you get in any Hornby, Bachmann or Peco starter set is almost definitely Code 100 (sometimes referred to as ‘Set Track’).

Do you need to worry about the difference?

When ballasted properly you can still achieve a great effect, and it certainly looked good on Langstead Junction… However, Code 75 track will look that tiny bit better still. To help you make up your own mind I’ve photographed some Code 75 track alongside Code 100 track.

In the first picture, the shallower rail height is certainly noticeable on the Code 75 version. The sleepers also look less chunky and better spaced. 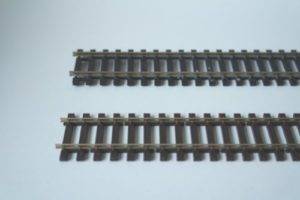 The difference in rail height is really noticeable side on:

With trains added, the Code 100 doesn’t look too bad and from this angle, the difference is less noticeable:

From some angles Code 75 looks noticeably better, but for others the difference is hard to tell.

Along with looks, there are other differences.

Code 100 is tougher, cheaper and curved radius’s come in pre-formed pieces (or Set Track to you and me), whereas Code 75 is only available in long strips of Flexi-track and can, therefore, be more challenging to create authentic looking curved sections.

In summary, as with most things in modelling, there are pros and cons to each side of the argument.

I’ve decided to use Code 75 from Peco for my new project, Woodford Wells, as the majority of the track is fairly straight and easy to shape.

If you want to read more about Track Codes I strongly recommend visiting Model Rail Workshop to read the full study and comparison. This post certainly helped me!

As mentioned back at the top of the article this is by Andy Carter at Calling All Stations, if you’re on YouTube his channel is also worth subscribing to.

For N gauge modellers, much the same applies for Code 80 and 55, which I’ve covered before here.

Will you be changing to code 75 (or code 55 if N gauge)? It would be great to hear your thoughts.


> A final, personal, note: I spend a huge amount of time testing, photographing, writing and researching techniques for these articles and pay for all the running costs of MRE out of my own pocket. If you found this article useful you can support me by making a donation on my fund-raising page. Thanks and happy modelling, Andy.
Updated:Friday, November 19, 2021