This 1880’s toy train still lives on and it’s famous but can you guess where it’s used? 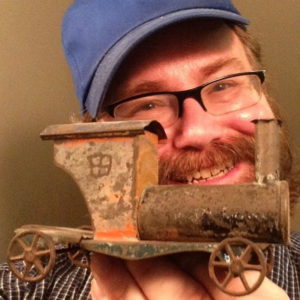 There can’t be many of us who haven’t seen this train at one time or another.

But it’s not a model train from one of the big manufacturers well know and love like Hornby, Märklin, Atlas or Bachmann.

No, this one predates all of those and yet it’s been played with by over half a billion people!

You probably won’t guess it so I’ll put you out of your misery.

It’s the train featured on the Monopoly boards and the train seen above is the actual toy train that the claimed inventor of the game, Charles Darrow, used for the station illustration on the game board.

According to Mike Mozar, who runs the rather cool Toy Channel on YouTube and seen in the photo with the toy train, Darrow received this train as a Christmas Present when he was a young child in the 1880’s.

Darrow then used this as the basis for the train sketch on the Monopoly boards that have since seen been seen by hundreds of millions of people around the world. You only have to look at the picture of the train on Monolopy boards and you can see his drawing has this exact train configuration with two small wheels only and the curved cab at the rear.

I’m Andy, creator of the multi-award winning ModelRailwayEngineer.com website and I invite you to come with me as I share the best tips, inspiring photos, advice and stories from my adventures in making miniature worlds, miniatures and model railways. Read more about me, model making tips or learn how to start your own model railway.

MRE uses cookies to give you the best experience on our website. If you continue to use this site we will assume that you are happy with this.AgreeNoRead more