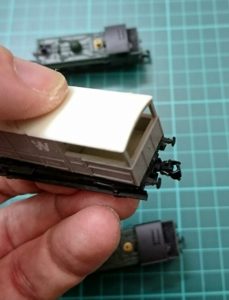 That was a sound I used to hear from the trains that ran past my home as a small boy.

It was the solid thump of the couplers and occasionally buffers banged as trains stopped and started at the level crossing just around the Corner from my childhood home in Wimbledon.
I’m not sure why I recalled this memory today. Maybe the glorious Spring sunshine this morning bought back distant childhood memories of playing in the garden in the summer and when I’d hear that distinctive clunk clunk, but back it came.

And it set me thinking.

The couplers on my N gauge trains don’t clunk. They don’t even look capable of clunking. In fact they look awful.

Originally developed by Arnold but now found on just about all N gauge ready to run rolling stock the standard Rapido couplers are effective but they just look plain ugly.

It’s the same as the couplers on my OO gauge rolling stock. Although these do make a very slight sound they still look u.g.l.y.

As Luck Would Have It

As luck would have it, for some time I’ve had some Dapol N gauge Easi-fit  magnetic knuckle couplers kicking around in a drawer.

These look much better and also enable closer coupling than the Rapido couplers. They also enable hands-free uncoupling, which I want in my goods yards, so with childhood memory of clunking couplers in mind I set about fitting them.

As a test I picked an old Lima GWR guard van. I’ve had this for ‘some time’ and over the years its got a bit tired and desperately needs a refurb. (It also wouldn’t be a disaster if I broke it in the process of fitting the new couplers).

I removed the upper body — four plastic clips near the wheels on the underside hold it in place — and popped the wheels out.

On model trains, couplers are made up of two sections: a socket on the wagon or car into which the coupler fits (and so giving it some movement necessary as the train moves on the track and the coupler itself that fastens to the coupler on the next unit holding them together.

Dapol’s Easi-fit coupling system is compatible with NEM sockets meaning that on modern rolling stock, that have these pre-fitted, its just a case of gently pulling out the existing coupler and pushing in the replacement. I’ve done this previously on some of my Dapol Pannier locos.

On older units, such as my Lima unit, however the existing non-NEM socket will also need replacing with a NEM version before the knuckle fitted.

(NEM is a set European group of model railway standards covering things like turn radiuses, wheel profiles and coupling. It’s similar to the standards by the American NMRA but helpfully they are not always the same. For a handy overview of NEM standards for OO gauge couplers, Buffers do a leaflet here).

Luckily, I had Dapol’s companion conversion kit to add these sockets to my non-NEM fitted guard van.

Examining the underside of the chassis it was evident that fitting this NEM pocket was going to be fiddly.

Essentially, it’s a case of carving out the existing plastic Rapido socket housing from the chassis. But carving this with a scalpel without damaging the delicate plastic detailing either side or the buffers that sit in front of it was going to take some deft blade work.

With the aid a sharp scalpel however I managed it and without slicing my fingers. Bonus!

I did cheat a little however by using an old soldering iron to melt away the excess plastic left by the scalpel and form a flat surface. 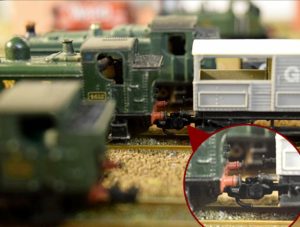 The fitted coupler in place and being pulled by a loco also fitted with knuckle couplers.

Next the new socket was glued into place and the knuckle coupler pushed in. It fitted without problem and looked great.

Tip: the couplers are delicate, tiny and easily lost (my carpet has eaten two them so far). The springs in them also have a habit of pinging out. When doing this I now work on a sheet of A3 white paper so they can be seen if dropped and use a cocktail stick, inserted into the knuckle, to press them home.

With the socket and knuckle in place I reattached the wheels and gave it a run around my track.

One of the challenges of couplers is getting the protruding distance right.

They need to poke out just past the buffers but go to far and you’ll have an unsightly gap between rolling stock and if there’s too little space the cars may bump into each other when going around corners. And not only can they bump into each other but the buffers can become entangled (the dreaded buffer lock) as one slips over and behind the one in front. They can’t come apart and can’t straighten up after the curve resulting in derailments.

A rule of thumb is that the rear face of the coupler needs to align with an imaginary line drawn between the front faces of the buffers to manage curves. I didn’t need to worry about this but Dapol helpfully provide a little jig to assist with this as part of their conversion kit

Thankfully on mine the distance between the guard van and the locos and other wagons I have that are already fitted knuckle couplers was sufficient and the coupling worked a treat on both the straights and around the curves during the testing. If yours don’t, Dapol offer couplers with different shank lengths — the section of the coupler between the socket and knuckle itself —giving more space between the cars.

With the coupling fitted and tested I set about some other minor repairs to the rest of the unit.

The corner pillars of the box had broken and this was just a case of applying some glue and repositioning them.

I did this for the improved look but also so that when I fit the neodymium magnets in the track bed for hand-of-God free uncoupling and push shunting the plastic wheels won’t get pulled by the magnetic field and cause the wagons and cars to cartwheel off the track, as can happen with metal wheels. (I’ll cover this in a future article).

The end result looks much better and with its new couplers it looks the part. Once the rest of the fleet has had their couplers swapped too my trains will look very credible.

Next, I’ll place an N scale guard I’ve made from Daz clay in the van, add a breaking wheel and weather the outside but I’ll wait for a rainy day to do that. I wonder what memories that day will bring?