If you’ve read Model Railway Terms You Need To Know you’ll know the 40 essential and most model railway words to get started but once you start planning your layout you’ll come across another set of unfamiliar words.

They’re all pretty straight forward but to plan your layout you’ll need to know them. 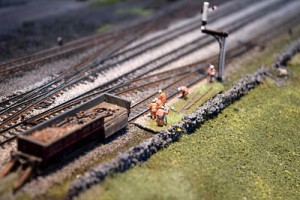 A siding is a dead-end line that branches from another (“through”) line [see picture right showing sidings on the Dentdale layout – MRE].

The “Inglenook” is nothing more than a siding that branches into three sidings, and may as well stop itself to form a siding looking backwards.

A Passing Loop is an arrangement of two switches that allows two trains to pass each other on a single line. More usefully in switching layouts, it allows a locomotive to park a car, uncouple and move from one end of it to the other, so as to reverse the order of the two on the line.

A continuous Loop is a piece of track around which a train may run indefinitely. It is topologically equivalent to a simple circle, though it may be an oval, or even a figure-eight if it folds back on itself and crosses with a bridge.

A reversing loop is the arrangement shown here that causes a train to return down the line from which it came.

A Wye is an arrangement at right. Like the Reversing Loop it enables a train to manoeuvre so as to reverse itself without any uncoupling, and like the reversing loop, it is electrically tricky to implement. 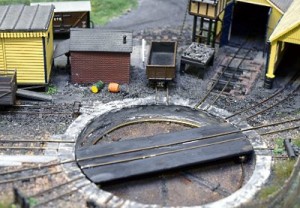 Turntable on the Elmgate & Thatcham by Tim Sanderson.

The turntable, beloved of steam enthusiasts, carries out two functions: It has the capability of reversing the direction of the locomotive (or very short train) that stands on its platen, and it provides a multiway switch function typically used to select from a large number of storage sidings.