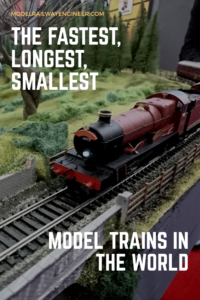 Ever wondered what the fastest model train is? How about the most expensive or longest model railway?

Here are all the surprising world-record breaking model railways and their facts and figures.

Here it is, the ultimate collection of model railway world records. I’ve read through my library, scoured the internet and spoken to people around the world to find this collection of facts and figures that will surprise and amuse.

Roy Castle would be proud.

The Single Most Expensive Model Train

The Most Model Trains Made By One Person

According to Guinness World Records, the largest collection of model railway vehicles made by one person is the James P. Richards Collection owned by the National Railway Museum in York, UK. There are 610 models in the collection handmade to scale.

The first model railway was built in 1859 was for the 3-year old son of Emperor Napoleon III  at  Château de Saint-Cloud.

The picture of the figure of 8 railway opposite is also the world’s first ever photo of a model railway, and is from the 8th October 1859 issue of the magazine Le Monde Illustré which described the clock-work railway.

“The railway built for the amusement of the Prince Imperial is a real toy as well as a masterpiece of mechanical science. It has been set up in a corner of the private park of Saint-Cloud. Its track is in the shape of a figure 8, and the curvature of its tiny rails is reminiscent of the surprising curves of the railway from Paris to Sceaux.

It has a small station, its small viaducts, its small bridges, its small inclines and ramps. The engine, which is about fifty centimetres wide, has wheels driven by an internal spring which can be wound up as desired.”

Source: Railway of the Prince Imperial

A OO gauge, live steam, model train version of the Mallard has been clocked at 186 scale miles per hour. Although Steve Burdett has a video of a model train doing 400 scale mph.

The Most Expensive Model Railway

Model railway enthusiasts spend a lot on their passion but the most expensive yet assembled is Miniature Wunderland in Germany. In 2015 it was valued at an astonishing £10million (€15million).

The first model railway ever built was for the 3-year old son of Emperor Napoleon III in 1859 at  Château de Saint-Cloud. 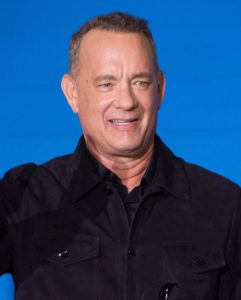 There are hundreds of model railway clubs around the UK and thousands elsewhere but The Model Railway Club in London, which was formed in 1910 and is still going strong.

I thought I had a lot of trains until I read about Bernd Schumacher in USA. Bernd started collecting in 1992 and now has 2,956 model trains and won him the world record in 2016.

While OO gauge, made famous by Hornby, and HO Gauge are the most popular model railway formats, the smallest is T gauge, where every 1ft in real life is reduced to .0267 inches in models form.

The record for the longest model train was set on 23rd April 2011 when an HO Gauge model train of 31 locomotives and 1,563 carriages measuring 925 ft 6 in (282.11 m) was built and run by the Wilmington Railroad Museum Model Railroad Committee (USA).

The Longest and Heaviest Train In The World

The longest train journey without changing trains is the line that runs a frankly staggering 6,346 miles (10,214 km) from Moscow, Russia to Pyongyang in North Korea. It takes a whopping 7 days 20 hours 25 minutes for the train to complete the journey.

For a couple of minutes on 3rd July 1938, the locomotive Mallard achieved 126 miles per hour on a stretch of track just south of Grantham, UK.

The fastest train isn’t steam or diesel but Maglev (magnetic levitation). The Shanghai Maglev achieves 267 mph on its way from Pudong International Airport to the Longyang metro station.

The Most Popular Model Railway Size

This depends on where you are. In the UK OO gauge, where 4mm represents 1ft in real life.  In America and elsewhere, the most popular size is HO Scale.

The Heaviest Train Carriage Ever Pulled By A Model Train

As recognised by Guinness World Records, the oldest model railway was built for the Lancashire and Yorkshire Railway in 1912 to train railway signallers. It is now in the National Railway Museum, York, England.

That’s it for now but I’ll update this regularly as new records are set. If you know of any other model railway facts, figures or records, drop a comment below and I’ll add them here.