Home » Model Making » How to make your own buildings

How to make your own buildings 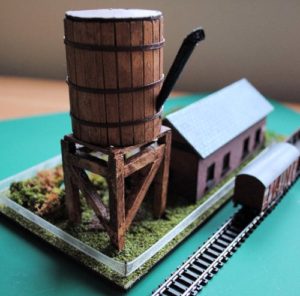 Looking to save money in the construction of your railway and want lovely buildings to complement your track and trains without the cost of buying pre-made models? Modeller Danny Young shares his techniques for making wonderful buildings from scratch.

I have always had an interest in old buildings be them still in use or in a derelict state. This coupled with model railways has led me to build and create structures in miniature.

After seeing a portable briefcase layout in Z scale I was impressed with what can be achieved in such a small scale. However, the price of this was over £1000. I set myself to create the same for a fraction of the price in N scale.

Being a student at the time money was tight; I knew that anything could be created using time, patience and self-belief. Using materials found in the local DIY, local model shops and Ebay the briefcase layout was completed over a few months and given to my dad in time for Father’s Day. This formed the basis of the hobby I have come to enjoy.

My first models were created using balsa and matchsticks. Balsa is a cheap material that can be shaped and cut in various ways. Being a fan of the Back to the Future films I created the saloon from the 3rd film with the challenge of it not costing more than £10.

The trick of building on a budget is to be creative with materials found around us. I keep cardboard packaging (much to the other half’s frustration!), milk lids and things like the clear plastic on gift sets as it can be used for inexpensive window glass. Bits of my daughter’s broken toys are a particular favourite as they have a lot of great molded detail. I am always looking at things to see if they could have a use, for example in my latest piece I used wooden drink stirrers from KFC for the top of walls and the legs from a broken toy garden bubble rocket became trusses for the station canopy roof.

The water tower was created using a toilet roll, balsa, cardboard and acrylic paint. The toilet roll was cut to shape; balsa strips were cut into strips of even length and glued around the roll. I use PVA as adhesive as it stays wet for quite a while so parts can be moved around when deciding where they fit best. PVA also dries clear and solid in a few hours so is a good sealant also.

I used acrylic paint to paint the tower. Acrylic paint is ideal as it can be watered down and mixed to produce several shades and colours (you can use old milk lids to mix and throw away). Also, it can be picked up at pound shops so I always have a few spare tubes of each colour. A tip is to use a sponge to apply the paint, this technique pick up the grain of the balsa and the finished result was pleasing. This technique was used on the wooden base also. The roof and bands of the tower were made with a cereal box cut and painted to fit. The building walls were was made with balsa; roof with plasticard sheets with hand scored the roof tiles. The base was from the back of an old photo frame which was covered with gravel and grass scatter.

Each model I make I try new techniques to test myself. The abandoned pub model (seen below) used broken windows made from plastic sheets from a gift set cut to look broken and smashed. An old curtain blows about in the wind, as I have seen in a derelict pub in Liverpool. I am always looking around buildings and their surroundings getting inspiration and thinking of what I could use to create the look in miniature.

A new technique from my latest Station diorama was that of rust effects on the station canopy pillars. The pillars themselves are old maker pens that I painted and added ‘Thphus Corrosion’ by Citadel. This is available in the War Hammer section of a model shop and gives the effect of metal corrosion. Rubbing Rust Oleum old penny bronze craft enamel gave the effect of rust.

My main tips for building models on a budget are to research and get ideas before starting. Think creatively, look at everyday objects and materials and think of alternative uses for them. Don’t throw any offcuts away, as you never know when you may use them in the future and most importantly have lots of patience. Enjoy being creative, there may be times you need to have a break for a few days or weeks but when you return you will be ready to build another building from scratch.

For more pictures of Danny’s delightful models, follow him on Instagram/scatch_built_models


>A final, personal, note: I spend a huge amount of time testing, photographing, writing and researching techniques for these articles and pay for all the running costs of MRE out of my own pocket. If you found this article useful you can support me by making a donation on my fund-raising page. Thanks and happy modelling, Andy.
Updated:Monday, December 20, 2021