Who Invented Hornby Trains – They Story Of Frank Hornby

Update: This post on Frank Hornby was originally written in September 2013 when I launched model railway engineer. It’s since been updated with more information, links to further information and other pertinent information.

It’s a wonderful coincidence that the year I launch this blog (2013) is also the 150th anniversary of Frank Hornby – the toy making visionary behind the trains I love and of three of the most popular toys of the 20th century that who inspired generations of children, including me!

It’s a mark of his genius that although he would later become famous as the inventor of mechanical toys with a gift for manufacturing he had very humble beginnings with no formal background in engineering.

He was born at 77 Copperas Hill, Liverpool, on 15th May 1863. The son of a wholesaler working in the Liverpool docks, he left school at 16 and first worked as a cashier in his father’s business, later finding work as a book keeper for local meat importer – David Hugh Elliot.

It’s perhaps a strange quirk of fate that today Hornby is best known for trains yet it was another toy that started it all.

In 1887, he married school teacher Clara Walker Godefroy and in 1899 started making toys for their two sons – Roland and Douglas – crafting toy bridges, cranes and lorries from sheets of metal in his garden shed workshop.

His early toys were individually made from strips of metal cut by hand. In a moment of visionary genius he realised that by using identical parts, fastened together with screws and nuts, different models could be made from the same parts. From this simple idea came the concept of fun educational kits for boys that would later become the huge selling Meccano.

His first models however didn’t sell well but Hornby struggled on and with help from his then still employer, David Elliot, he took out a patent on his creation (granted in 1901 as “Improvements in Toy or Educational Devices for Children and Young People”). 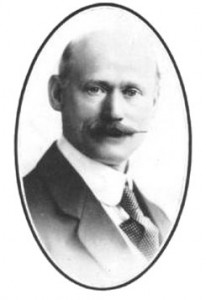 Like Hornby, Elliot saw the potential of the the concept and urged Hornby on, allowing him to borrow premises next to his office for a workspace and becoming a partner in the fledgling business.

Now working together, Hornby and Elliot renamed their business “Mechanics Made Easy” and launched their first product in 1902. It consisted of 16 different parts with instructions on how to make 12 different models.

Although initial sales were slow they stuck with it and gradually sales increased from the 1500 sets sold in 1902 and by 1906 the company had become profitable.

In 1907, with sales and profitability increasing, Hornby gave up working for Elliot to concentrate on the rapidly growing business.

A year later, 1908, Hornby registered “Meccano” and formed Meccano Ltd, at which time Elliot decided to step down ending his involvement.

In 1910, Frank’s son, Roland Hornby joined the business and launched an expansion into Europe, opening offices in France, then Germany and Barcelona, before in the United States.

Hornby clockwork trains, in kit form, were introduced in 1920 and overtook sales of the Meccano toys in 1930. The first electric trains came in 1925 and in 1931, he launched the Dinky range of miniatures. Initially these were intended as accessories to go alongside the toy trains but became popular in their own right over time.

A visionary way ahead of his time, he lead his company to become the largest toy manufacturer in Britain and by the 1930s he was a millionaire.

In 1931, Hornby went into Politics becoming Conservative MP for Everton.

He died of a died of a heart condition and diabetes in Maghull, near Liverpool, on 21st September 1936 but the toys he invented went on to inspire generations of children, including me.


> A final, personal, note: I spend a huge amount of time testing, photographing, writing and researching techniques for these articles and pay for all the running costs of MRE out of my own pocket. If you found this article useful you can support me by making a donation on my fund-raising page. Thanks and happy modelling, Andy.
Updated:Sunday, January 2, 2022