How to make a Christmas scene 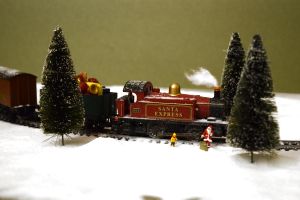 ‘Tis the season to be jolly and what better to wake up to on Christmas morning than a snow-covered model railway display. How’s how Santa makes his.

It takes about a day to make, needs minimal crafting skills, no special tools and will look wonderful on Christmas morning.

Begin With The Basics

Before we can get to laying track or adding scenery, you’ll need something to build your festive scene on.

Scale trains need a stable, flat, surface on which to run so ideally a plywood board (from B&Q or another DIY store) is recommended but anything firm and flat can be used. Insulating foam, again available from the local DIY store, is also increasingly popular amongst model railway builders as a base.

Some people even used several layers of cardboard, the sort used for packing boxes — glued together. If you use this ensure you weigh the layers down while gluing to keep them level. Trains don’t like bumps!

Assuming you’ll be using Hornby OO gauge (the most popular model railway scale in the UK) you’ll need a board of approx. 3ft by 3ft. This is the absolute minimum and will work with the short locomotives and wagons we’ll be using here.

If you plan on using keeping your display after Christmas and perhaps running longer rolling stock, passenger coaches or larger locomotives, I recommend going bigger.

Once you have the board, you’ll need some track. 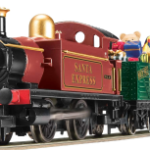 The Hornby Christmas Train Set is great for making a festive seasonal diorama as it has not only the trains but the controller and track to make an oval that will fit your board and it’s a lot cheaper than buying all the parts separately.

Whether you are using the train set or have bought the track individually, connect the track together into an oval.

I’ve covered connecting the track together before. Here’s the important bit:

“Take a close look at a section of track. You’ll see that there are two rails. At either end of the track, one of these rails will have a tiny clip sticking out. Look at another piece of track and you’ll see the same. Connecting track together is simply a matter a matter of pushing the track together so the clip on one rail slides under the protruding bit of rail on the next section.

Run your finger over each join, there should be no ridge or gap between sections of rail. If there are the trains will most likely derail. Where you feel a gap or ridge, gently pull the track apart and slide them back together.” 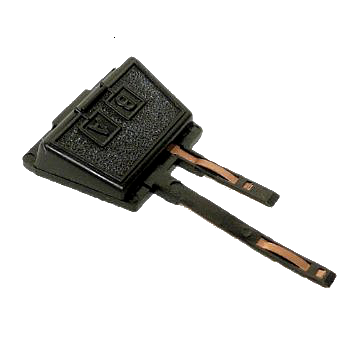 If you have the train set, attach the power clips provided to the track. Alternatively, you’ll need to get some track clips, these slide under the rails and connect power to the rails.

These come with the Hornby train set or can be purchased independently from Amazon — search for Hornby power connect clip — or a model railway shop (if your local high street has one).

When you’re happy with the track, glue it to the base. Normal white wood or craft glue will work fine. Make sure you don’t get any on the rails and leave it to set — 6 to 12 hours should be fine.

With the track down, attach the wires from the controller and power transformer from the Hornby set.

If you don’t have these they, like the power connect clip, can be purchased from Amazon or any good model railway shop.

You’ll want a DC controller and an appropriate transformer. The Gaugemaster single track controller is fully compatible and it’s generally regarded as being superior to Hornby’s basic unit. The wires from the track hook up to this controller.

If you’ve got the Hornby train set, place the loco on the track and gently turn up the power on the controller. Your loco should then trundle gracefully around the track.  If you need a locomotive and wagons, they’re available new from eBay here.

The most common causes of problems if the train doesn’t move are poor connections between the wires and track or where the track connects together. Check the track assembly and wiring and try again.

And Now For Some Snow! 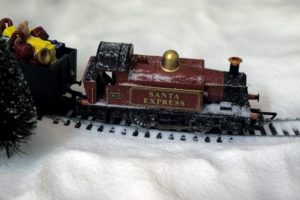 With the track laid and the trains tested, you can start on the scenery and the snow in particular.

If you’re in a DIY mood, you can make your own snow as I’ve described before. It’s a simple technique using white paint, more PVA and Bicarbonate baking powder.

Alternatively, if you don’t have time, you can get ready-made snow. This snow stuff is pretty realistic and a lot easier to apply.

The grains of this are tiny, as can be seen in the close up shown just above and I have to admit to secretly enjoy working with it. It’s a lot of fun and feels right.

The DIY stuff needs careful application, especially between around the rails. The off-the-shelf stuff is just a matter of spreading wood glue/water mix (60% water) with a few drops of washing up liquid around on the board and scattering the material over it. I use a kitchen sieve to give help give a more equal covering and avoid any accidental spillage when pouring from the main container.

To scatter the snow over the track, use the same tried and tested techniques as for ballasting but don’t worry about keeping it off the sleepers.

If you’re feeling brave, you can also add snow-covered hills to your scene. To do this just, take some newspaper and scrunch it up into balls and glue them down in the middle of your scene. Then take a few more sheets, soak them in water and lay them over the top of the newspaper balls. Then paint over this with some wood/craft glue and leave to set. Finally, paint it white and then cover with the artificial snow as above.

If you just want some small snowdrifts, cotton wool topped with the fake snow above can look very effective. The Hornby locomotive used here also doesn’t have a smoke effect but you can pinch some cotton wool into a smoke shape and insert into the funnel to give a fake look that can look quite good, which is what I did. 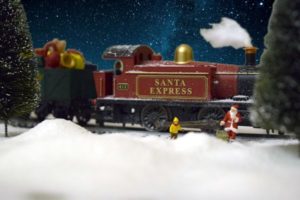 You can also create a backdrop to your scene. This encloses the diorama so you don’t see whatever is behind it and makes the scene more believable.

Google ‘night sky’ and find some Blue tinted night star scenes. This one is my favourite, with a representation of it shown left.

Print this out on a colour printer and glue it to lengths of cardboard cut to the same length as your board and then prop up at the rear of your diorama. It’ll make the whole thing look magical.

You can finish off your model railway snow scene with a few last touches.

Having your train pass through snow-covered pine trees will make the You could buy some purpose made model railway trees but these can be expensive. Instead, a trip to a Christmas market or craft shop will turn up some small-scale pine trees intended for Christmas decorations. I found some lovely little trees going for a £1 each in one of those Christmas shops that tend to pop up in late November.

Placing these either side of the track will add a lovely feel.

You can also add little figures, such as the appropriately scaled Father Christmas. They’re a little expensive (at the time of writing) but will really bring your scene to life.

And that’s it. Your model railway snow scene is ready to go. Place your trains on it, turn up the power and let the Santa express go.


Affiliate notice: Some links on this page will take you to carefully selected businesses, including Hornby, B&Q, Rapid Online, Amazon, eBay, Scale Model Scenery and Element Games, through which you can buy products mentioned. These links are made under their affiliate schemes which means that although the price to you doesn't change I get a small commission on the orders you place. Please see the disclaimer for more details.
> A final, personal, note: I spend a huge amount of time testing, photographing, writing and researching techniques for these articles and pay for all the running costs of MRE out of my own pocket. If you found this article useful you can support me by making a donation on my fund-raising page. Thanks and happy modelling, Andy.
Updated:Sunday, January 2, 2022