Home » Model Railways » Electrics » DC or DCC? What do you prefer and why

DC or DCC? What do you prefer and why 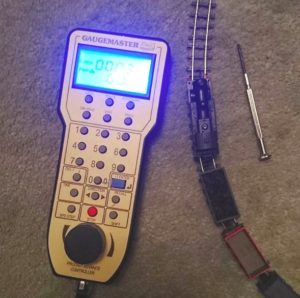 This is one of those topics that everyone has a view on. But what do real-world modellers prefer?

Dave B. captured a common theme, with “DC sooo simple”.

John P. adding, “I like the concept of DCC but I have yet to see it at its full potential.”

Adding, “I’ve tried out many controllers on various layouts and frankly all the button-pressing and address-entering that goes with it takes the fun away for me. I’m sticking with DC on my layout — loads of wiring, sure, but as a (retired) telephone engineer I have no fear of it. In fact, I think it makes it more fun ”

Phil R. on my Facebook page summed a commonly viewed problem with DCC, saying that he’d “considered going digital, [and] even bought a controller and a loco to try it out” but then thought again.

“With 20+ non-DCC locos, it seems a bit of an expense to upgrade when my old analogue set up works just how I want it to.”

Arty echoed this view: “DC for me. Too many locos and the cost would be out of my league. Anyway I’ve seen so many layouts where the operator doesn’t look and bang…. loco goes up the back of another. Just not for me.”

But DCC is preferred for its control…

David A. said “mine is DCC, although, I do have a small mountain railway on the same layout to run my old 00-9 Lilliput set from when I was a child 35 (or so) years ago. The main DCC layout is all N gauge and I think digital is defo the future — easier to run and control locos”.

As did David R. explaining, “I have found it [DCC] more controllable for slow running and I like the acceleration and braking control.

David A. added “then there’s the sound aspect to bring greater realism. I’ve just ordered my first sound chipped DMU from Graham Farish for delivery at some point!”.

I have to agree. Sure you can now get sound for DC locos and as seen here:

But they still have some way to go to compete with DCC sound, especially the recent Hornby TTS DCC sound chips which, with prices of around £40 and range of sound effects including sounds you can almost see, are proving very popular.

Another often overlooked point is that DC trains often run better once converted to DCC.

I discussed this with one of the exhibitors at the Solent Model Railway Group’s exhibition on 24th/25th February. For some reason, the DCC chips seem to make the motors of locomotives run smoother and more reliably. Neither of us could put our finger on why this is but it’s definitely an advantage. (If anyone knows why this is please share your wisdom below in a comment).

Of course, you can run both…

If you have several layouts, get the best of both worlds like Tom M.: “I have two layouts one DC and one DCC and I like both. I am 75 and have no problem with either layout.”

Or mix them on the same layout…

This is a particularly attractive option if you have a lot of older locos but want the benefits of digital control. Split up the wiring, with some circuits analogue and others digital. As long as they’re kept separate there’s no problem in doing this.

David R does just this: “I changed to DCC last summer but l left two isolated loops to run my older DC locos.”

It’s a neat solution to use allowing you to upgrade an old fleet over time and it’s what I’m doing with an N gauge layout.

One half is DC with bulk the bulk of my old Graham Farish locos on it while a hill-top section is DCC and for which I’m now using to test the Gauge Master Prodigy Advance 2. (American readers can get identical MRC Prodigy Advance 2 here)

DCC is seen as the future while DC is still the most popular right now. Especially, for those with lots of existing locomotives or points to upgrade.

The low cost of DC being the biggest advantage but the fine control, especially at slow speed, together with ease of operation when running more than a few trains and of course the bells and whistles make DCC increasingly popular. Particularly if starting from scratch.

Do you enjoy the digital effects and multi-train precision control of DCC or are happy with the cheap and cheerful simplicity of DC model railways?


Affiliate notice: Some links on this page will take you to carefully selected businesses, including Hornby, B&Q, Rapid Online, Amazon, eBay, Scale Model Scenery and Element Games, through which you can buy products mentioned. These links are made under their affiliate schemes which means that although the price to you doesn't change I get a small commission on the orders you place. Please see the disclaimer for more details.
> A final, personal, note: I spend a huge amount of time testing, photographing, writing and researching techniques for these articles and pay for all the running costs of MRE out of my own pocket. If you found this article useful you can support me by making a donation on my fund-raising page. Thanks and happy modelling, Andy.
Updated:Thursday, November 12, 2020