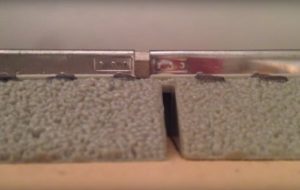 If you watch and listen to any real railway you notice a particular noise.

It’s the strangely reassuring Clickety-Clack sound as the wheels roll along the track.

Just recently on the Model Railway Engineer Builder’s group, there was a discussion about ballasting and track laying and one of the members mentioned a tip for reproducing this sound. And without any digital audio magic!

Jules Garner suggested the cracking tip of leaving a gap between the rails of the model track so the OO, N or whatever gauge of track you work in makes the same clickety-clack sound as the real thing.

It really does work. And Jules isn’t the only one doing it.

There’s a video clip that another modeller – Tech and Transit – who has done this just this below. Just listen to that sound!

Jules also added, “It’s also worth noting that just like the real thing, rail expands and contracts through the seasons whether it is in your house or out in a loft or a shed/ garage, so gapping the track should be maximal if built in the winter time as those gaps close in the warmer months… ( not by much but they can and in extremes, warping can occur)”.

It’s a great little tip and I’d love to hear from anyone who does this too.