How to make a frozen lake model or diorama 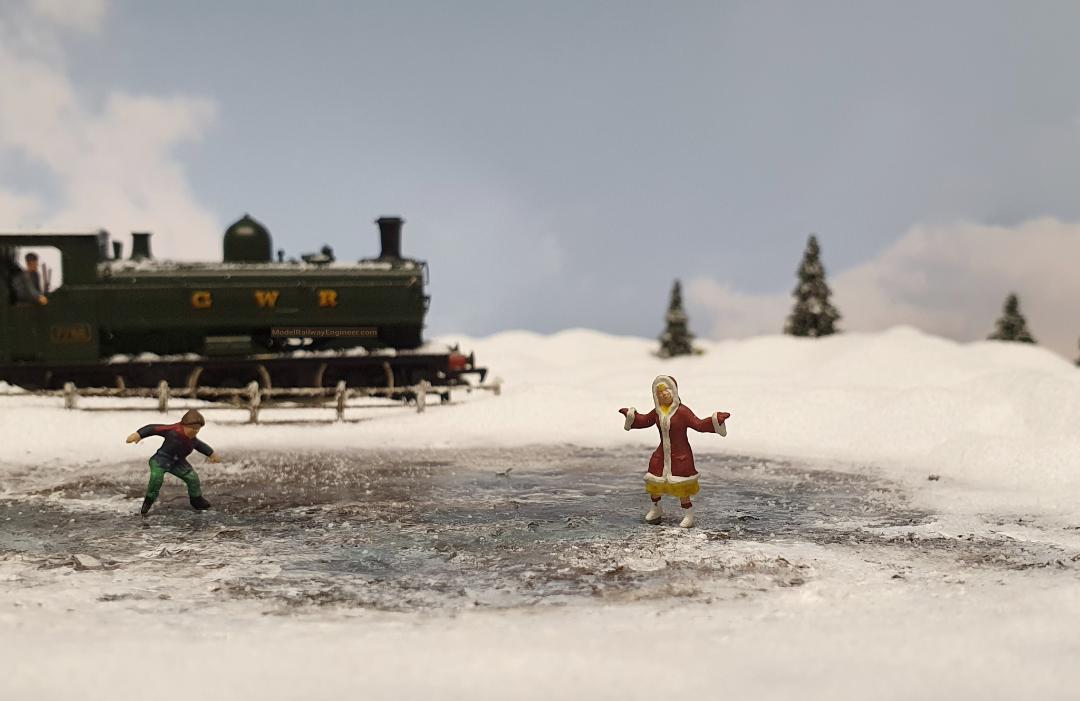 Want to make a believable Winter frozen lake scene for your model train layout or diorama? Don’t get cold feet, here’s how to model that frozen ice look.

There’s something about frozen lakes.

In my childhood, I would play around the ponds and lakes of Wimbledon Common and loved the cold winter months when they would freeze over and me, my brothers and our dog could walk and slide across the edges*. The strangeness of frozen water was impossible to resist.

Sadly, we don’t seem to get many winters now when the temperature drops enough to freeze over local ponds. The closest I come now is the water in the garden birdbath turning solid 🙁

Model trains are of course often a chance to recapture our youth so what better than to make a model railway diorama that recreates childhood memories of model trains and frozen water!

I set about trying to make this 8 weeks ago, thinking it would be a lot easier than it turned out to be and after a lot of failed attempts and experimenting I’ve finally figured out a technique for modelling frozen lakes and ponds. I literally made 11 different lakes trying different paints, materials and approaches before I was happy with the results and created the scene above.

The first step to creating a frozen lake is to create a recessed area that will become the lake.

I build my scenes on styrofoam insulating sheets, so it’s just a matter of rubbing away with sandpaper until I have an appropriate shape and depth. If you have a wooden base for your layout use chisels or a sander.

To save money on materials, the impression of depth will be created by paint effects rather than having actual depth so a depression of about 5mm is all that’s needed.

Once the hole was made, I then paint a dark brown foundation layer, adding successively lighter shaders around and across the bed but leaving some areas of the darker base visible. This will give the lake that dark water looks typical of still frozen water. (I use these paints for expanded polystyrene and styrofoam bases).

A neat trick I’ve discovered, by chance, is to keep the outer edges darker.

This runs contrary to what I’d normally do for lakes and rivers where I paint the edges in lighter colours to simulate more light reaching the lake bed as it shallows out towards the banks.

In this case, however, I’ll be adding white around the edge (for the ice) later so using darker shades here adds contrast to the white and gives a better final look.

In places, I also applied dashes of blue — or rather Torquoise, Pebeco 169-30 to be precise — to give that characteristic blue hint to the ice. I tried various blue paints but this Torquoise is the closest to the shade of blue I’ve seen on frozen lakes. A light shade of Torquoise, watered down, is used here, allowing it to show through the darker shades to come.

The surrounding areas are painted with a cheap acrylic white.

Create the impression of depth

As already said, to save money on the Realistic Water I use paints to create an illusion of depth rather than actually having a deep lake. This is achieved by adding successive layers of different shades and leaving spaces through which the base tones can be seen.

I do this by pouring the fake water, Woodland Scenics Realistic Water, and leaving it to set until its tacky and then applying a small amount of colour. In this tacky state, the added paint doesn’t spread and mix uncontrollably. Instead, it can be positioned and mixed to achieve the gentle cloudy looks of different colours each delicately blending with those nearby and darker shades below.

While this is stage is drying, I also paint the banks of the lake and where the surrounding landscape meets it in Vellejo white. 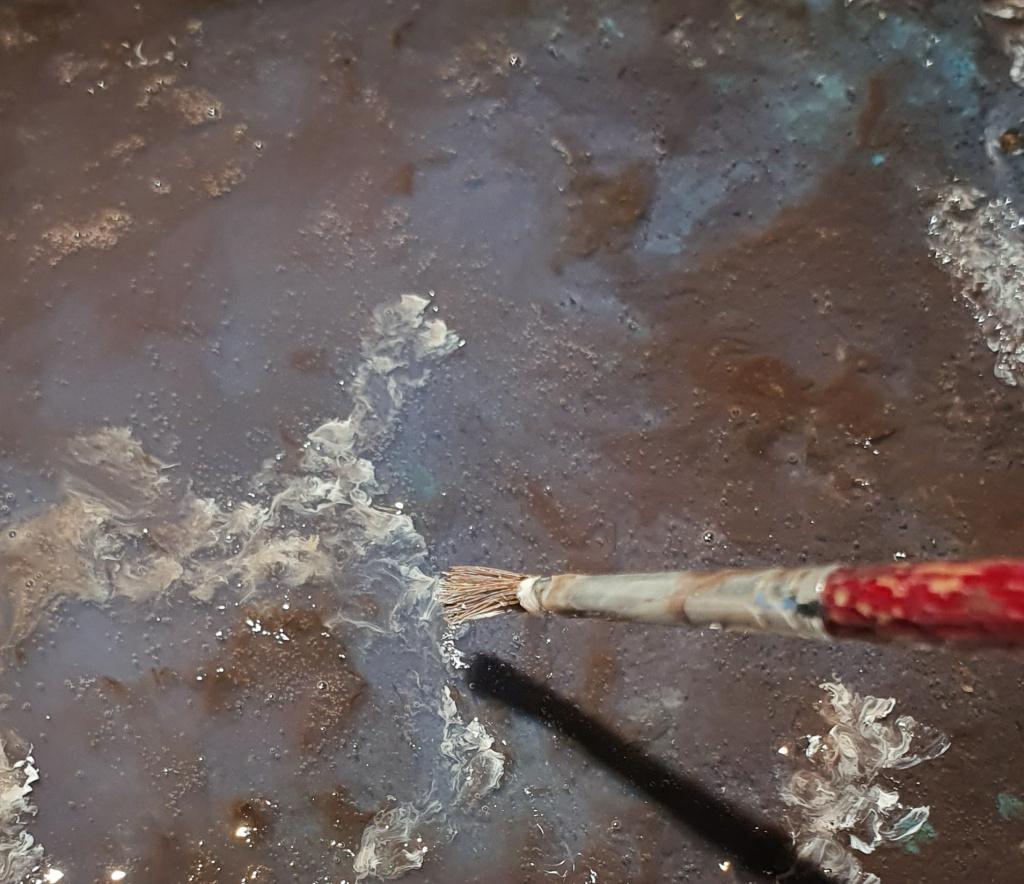 Now dab some white acrylic paint into it and gently coax it into interesting places, specifically towards the edges. I use photos of frozen lakes from Google as a reference to give an idea of where. Smudge and smear the white around to give a  smokey, random, appearance and dab it to break up hard edges where the paint ends, like the white on the left in the above photo, not that in the middle and right which is still being mixed in.

Leave this until it’s dry.

For the surrounding area, I built up some low-lying mounds with expanded Polystyrene packing material and then covered them with Woodland Scenics Snowflakes, although the snow can also be made. This was held in place by pouring some over an area and gently spraying it with diluted white glue and a few drops of washing-up liquid mixed in to break the surface tension of droplets and stop blobs of water/snowflakes from appearing. Let this dry and repeat until it forms the height and shape required.

The railway and trains

The train and railway, were simple a simple oval of Hornby OO gauge track, powered with an analogue controller and a GWR 0-4-0 locomotive. (If you want a Christmas-themed train check out my article on trains to go under a Christmas tree)

As a final touch, a few figures from Woodland Scenics ice skating figures were added. These are lovely little figures and even have skates on their shoes although you can’t see it in the photo.

The trees are standard OO gauge model trees that are sprayed with a hair spray before the snow (above) is sprinkled over them.

A small wooden fence was also added along the railway line. Like the trees, a light coating of snow was added.

Finally, a blue sky/cloudy backscene was added to create depth and bring it all together.

And that’s it for the lake scene. I might add reeds and some vegetation (such as a decorated model Christmas tree) in due course but there’s enough here to rekindle childhood memories of playing around on the ponds of Wimbledon Common for now.

* In light of the tragic events in Solihul in the Winter of 2022, I should clarify the ponds mentioned here were very very shallow and I don’t recommend playing on frozen water for obvious reasons.


Affiliate notice: Some links on this page will take you to carefully selected businesses, including Hornby, B&Q, Rapid Online, Amazon, eBay, Scale Model Scenery and Element Games, through which you can buy products mentioned. These links are made under their affiliate schemes which means that although the price to you doesn't change I get a small commission on the orders you place. Please see the disclaimer for more details.
>A final, personal, note: I spend a huge amount of time testing, photographing, writing and researching techniques for these articles and pay for all the running costs of MRE out of my own pocket. If you found this article useful you can support me by making a donation on my fund-raising page. Thanks and happy modelling, Andy.
Updated:Tuesday, January 10, 2023